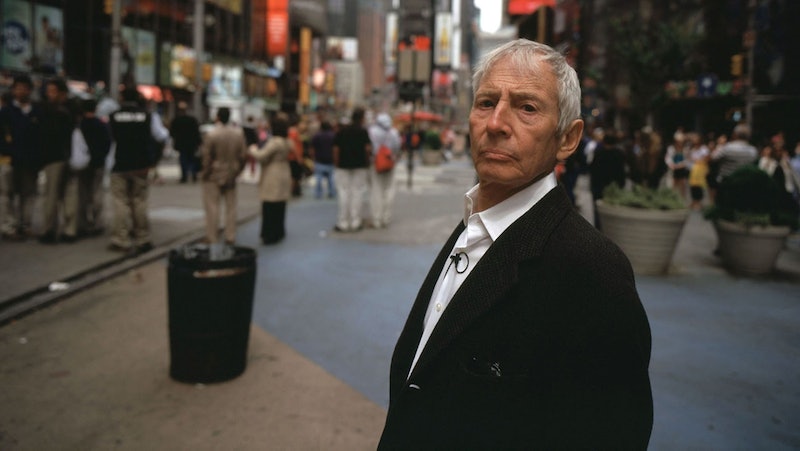 In the chilling finale of HBO's six-part series The Jinx: The Life and Deaths Of Robert Durst, which aired Sunday, Robert Durst could be heard whispering that he'd "killed them all." The series had posed the question of whether Durst, a wealthy real-estate heir, had murdered three people — his wife, his friend, and his neighbor — over the course of more than 30 years, and ended with Durst apparently confirming that he had. "What did I do?" a microphone caught Durst saying. "Killed them all, of course." Late Saturday, hours before the episode aired, Durst was arrested in connection of the murder of his close friend Susan Berman.

Law enforcement had been circling Durst for decades, but had been unable to convict him of murder in any of the three deaths. Durst's first wife, Kathleen McCormack, went missing in 1982, and has never been found. Berman was murdered in her California home almost two decades later, in 2000. Shortly afterwards, Durst stood trial for the murder of Morris Black, his elderly neighbor, and admitted to dismembering Black's body. Amazingly, he was acquitted of murder, having argued self-defense and claimed that his Asperger's syndrome explained his behavior.

Over the last few years, various family members had taken out restraining orders against Durst. In a Sunday statement, Durst's brother Douglas said: “We are relieved and also grateful to everyone who assisted in the arrest of Robert Durst ... We hope he will finally be held accountable for all he has done.”

So what will happen to Durst now? Well, a conviction may not be as cut-and-dry as you'd think. The New York Times reports that the "killed them all" statement occurred while Durst was whispering to himself in a bathroom, unbeknownst to the producers; two years passed, added the Times, before filmmakers even discovered the audio. Durst's mental stability has been called into question before — at his trial for the murder of Black — and the accuracy of his statement aside, it's possible that the tape may not be approved as evidence in a criminal trial.

Shortly before his arrest Sunday, Durst was found by law enforcement at a New Orleans hotel, murmuring to himself, ABC reported; he was staying under a false name. Last week, in light of the documentary airing, the investigation into Berman's death had been re-opened. In a statement, the LAPD said:

As a result of investigative leads and additional evidence that has come to light in the past year, investigators have identified Robert Durst as the person responsible for Ms. Berman's death.

Although it's been more than 30 years since the disappearance of McCormack and 15 since the death of Berman, there is no statute of limitations for murder charges.

The producers of The Jinx have long cooperated with authorities over their own involvement with Durst. In a New York Times interview, Marc Smerling said, “We had a moral obligation and an obligation to the families of the dead to see that justice was done.”