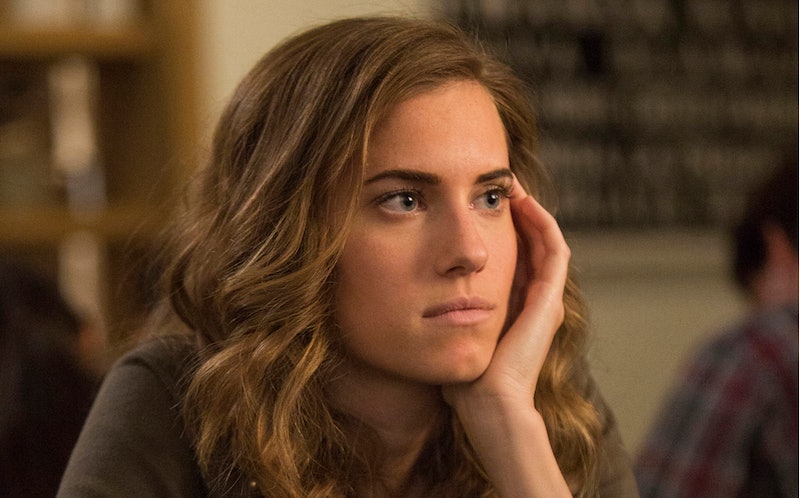 Damn, girl. How many times can I defend you? Marnie Michaels has finally done it: I can't defend her anymore. On Girls , Marnie announced her engagement to Desi in the worst possible way: By waving it in Ray's face after he makes a rather obvious declaration of devotion at his election victory party. And despite the fact that this act got me to finally start waving my white flag as a Marnie apologist, it still didn't make her the worst person on the show this week. That honor goes solely to Zachary Quinto's Ace, who is so self-serving that he should probably be put in a lab to be studied. Unfortunately, that doesn't lessen Marnie's colossal mistake.

Last week, we learned (along with an indignant Shoshanna) that Ray is still holding a candle for Marnie and not his first Girls love, Shosh. (I know that whole Shosh and Ray back in action storyline was supposed to be a misdirect, but come on, this Marnie thing was apparent from miles away.) Naturally, Marnie's engagement to Desi wasn't going to be the best news for our civically minded Brooklynite. Marnie has no idea that Ray holds this candle for her — supposedly. But something inside her stirs the need to announce the engagement that — moments before — she asks Desi to keep a secret so they can hold it just between the two of them for a while. I'm sure Marnie would say that thing inside of her is friendship: She feels close to Ray, so she discloses this information only to him as a gesture of true friendship. And I would have argued that to the ends of the earth if it wasn't for the last minute announcement at Ray's party.

After Ray stands up and makes his entire winner's speech a declaration of devotion to Marnie — sure, it had a lot of pot hole metaphors, but essentially he promised to always be there for Marnie no matter what. Maybe I simply know too much as a viewer, but it seemed pretty obviously sad and longing for his just-a-friend. Marnie's response? Rather than let this sweet friend, who'd just told her in front of an entire room that he cared about her so deeply he'd still do anything for her, enjoy the night that is supposed to be all about him for once in his life, she arrests the mic and attempts to make the party about her. (Call me crazy, but it certainly helped that she was wearing the same shade of blue she wore when she sang Kanye and tried to make Charlie's victory party all about herself a few seasons ago.)

Look: Even if, for argument's sake, Marnie had absolutely no idea that Ray has feelings for her, she still exhibited incredible selfishness by hijacking his party to announce her engagement that, spoiler, was something she asked to keep private just hours before declaring it to a room of mostly strangers. And I'm not saying that even if Marnie did know Ray had feelings for her that she should shield him from her relationship (I'm not about to argue that just because a guy is nice and offers friendship that he's somehow owed romantic compensation because I think we all know that's complete and total BS). What I am saying is that Marnie is so terminally myopic and self-centered that she can't even comprehend when she's being a totally selfish ass and that she's clearly learned nothing from her past humiliations. Maybe she and Desi are perfect for eachother after all.

But it's not all bad. At least she doesn't waltz around New York chewing on a perfectly good toothbrush, seducing Adam's only friend only to use her to get Adam's girlfriend to spew some holistic BS and leave him. At least she's got that buffer, I suppose.