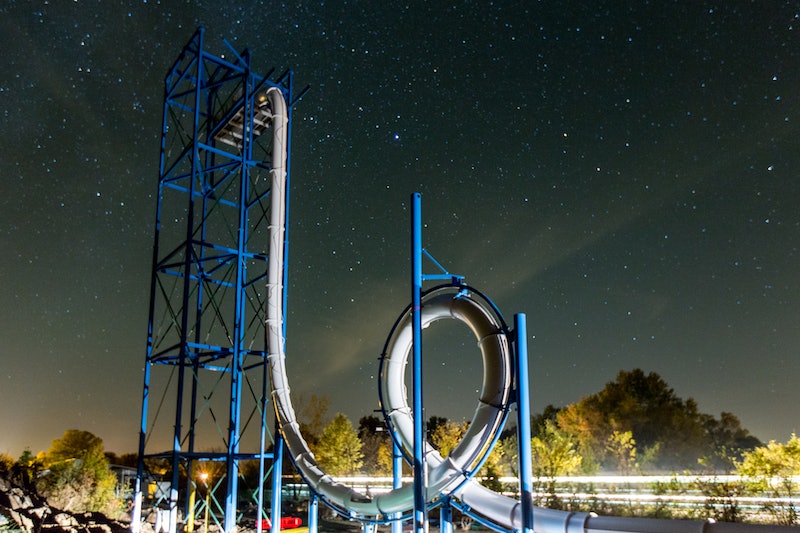 Until now, thrill seekers have been forced to either speed down a wet slide or ride upside down through loops on a roller coaster — but never both. Well, it's 2015, and it's about time human evolution allowed us to make ourselves sick by doing both, not one or the other. New Jersey's most notorious water park has heard you loud and clear: Action Park is planning a vertical loop water slide, the Sky Caliber, the first of its kind in the world. The Sky Caliber's completely upside-down loop has long been deemed impossible by engineers, but now it might be coming to Vernon, New Jersey, in 2016.

Developed by water park tech and engineering company Skyturtle Technologies, the Sky Caliber will send riders whizzing through its tube at 50 miles per hour, including while upside down through the 30-foot loop. Riders go through in capsules called ultra raft vehicles that the official website boasts is "never flat" — meaning you'll be traveling at every which angle except for your natural resting angle. The slide itself will stand at 90 feet tall and be able to accommodate 180 rides per hour.

Besides the world's first vertical loop, the Sky Caliber will also be the first water slide with a vertical freefall that, judging by pictures, looks absolutely insane. It appears that riders start the ride by doing something not unlike jumping off a cliff before directly going into the upside loop, a combination that is giving me vertigo just typing it out.

Believe it or not, the Sky Caliber is actually Action Park's second attempt at having a vertical loop water slide. In 1985, the water park introduced the Cannonball Loop water slide that also featured a vertical loop, but it was closed down after just a week because of safety issues. Back then, riders went through without capsules and their skin an bathing suits would create fiction, slowing them down and preventing them from going through the loop. Sometimes the riders themselves would use their hands and feet to slow down and the same thing would happen. Can you imagine being stuck inside of a water slide between a vertical drop and a vertical loop and unable to get out? That may very well be my worst nightmare.

That's why Skyturtle Technologies has designed the Sky Caliber with rafts, and thus making it the first water slide of its kind. Mountain Creek (the resort that houses Action Park) President Bill Benneyan told NJ Advance Media on Monday:

Everybody in every sport wants to do a full 360 ... and the original Cannonball Loop was a backyard approach to that. These guys have figured out how to do it right. It's a heck of a ride. It rides like a dream.

Hopefully, Skyturtle's advanced technology will keep Action Park from reviving its infamous reputation for injuring visitors. When the park reopened under its original name at Mountain Creek last summer, New Jersey's Star-Ledger pointed out that for years, locals had been referring to it by nicknames like "Accident Park," "Class-Action Park," and "Traction Park." Now the park is set to give the vertical loop water slide another go with the help of Skyturtle, who is now doing test runs on its prototype but still needs to secure the state's approval to install it.

Needless to say, this kind of water slide is not for everyone — like me, for instance. Hey, recreational free falling and traveling upside down for fun is not everyone's cup of tea. But kudos to those of you brave enough to seek this out. While you kids go and have fun, I'll just be sitting here enjoying a nice tall glass of Nope and Not Even Once.