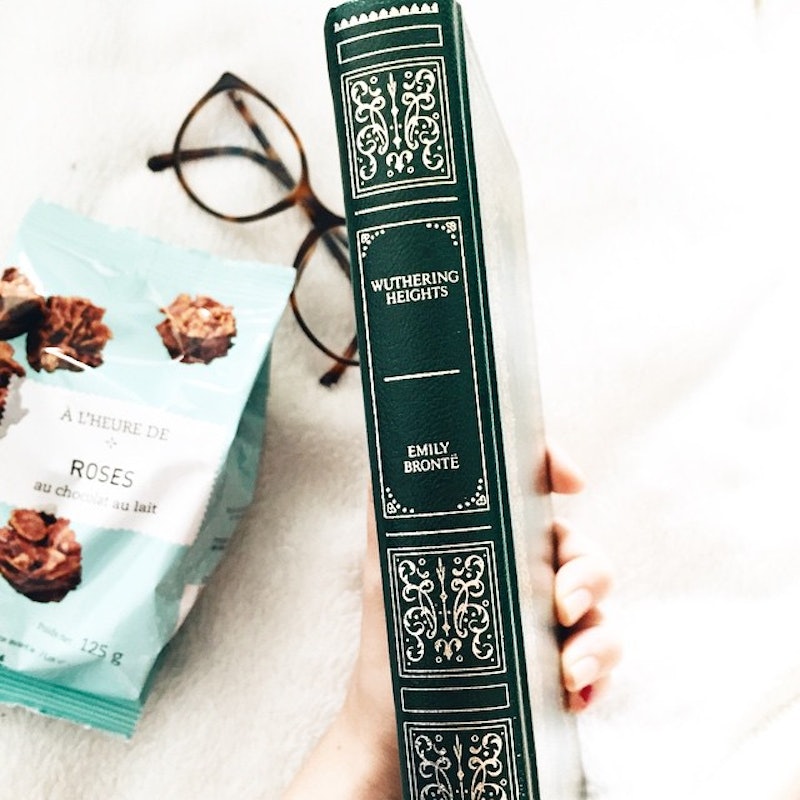 The first time I read Wuthering Heights, I hated it. Hated it. I was in high school, and I was just beginning what would be a life-long love affair with 19th-century literature. I had barreled through all of Austen’s novels and Jane Eyre, and I sat down with Wuthering Heights, expecting to be amazed, and instead, found myself feeling a weird combination of boredom and fury. It wasn’t until I got to graduate school that the novel “clicked” for me—I started reading it for a class, thinking, “Ugh, not this again,” and then somewhere around page 100 found myself engrossed and wondering where the hell this amazing, bizarre book had been all my life. My love has only grown upon subsequent re-readings: Wuthering Heights is one of the strangest, most beautiful, most ludicrous, and most narratively complex novels I’ve ever read, and I can’t get enough of it. Who are these insane characters and why do they feel the need to say every thought they have the second they have it? Why do they all insist on marrying each other? Why does Mr. Lockwood keep nosing about their lives? Why don’t they ever go anywhere??

If you’re a fan of Wuthering Heights—or, like me, you hated it at first and are now wondering whether you should try again—read on for some things you might not have known or noticed the first time through:

1. It is NOT a romance novel

I think one reason I hated Wuthering Heights the first time I read it was that I was expecting it to be a great love story. And then I got into the book and realized that it is, in fact, a story of terrible people doing terrible things to each other. I was outraged: Where was the love? Where was the romance?? I understood later that my expectations had been set by people who knew the story from the film adaptations of the novel, rather than the novel itself.

The film versions of Brontë’s novel usually go to great lengths to cast the Catherine/Heathcliff relationship as a passionate romance, I think because it’s much easier to film yet-another-doomed-love story than it is to capture what the novel is really about: a destructive relationship between two people who are obsessed with each other. Cathy’s famous line—“I am Heathcliff!”—is often touted as uber-romantic, but it expresses something that isn’t really about love: Cathy wants to be Heathcliff, to merge with him. After she dies, Heathcliff breaks down the side of her coffin so that, upon his own death, they can be buried next to each other and literally decompose into a single, shared body. They strive to transcend the boundaries of human subjectivity and physicality—to become something that is other and only them. Their relationship in the novel is strange and fascinating, but it’s not love.

(It’s for these reasons that I found the whole Twilight thing hilarious. In Eclipse, Bella and Mr. Sparkly Von Vampire mention Wuthering Heights again and again as a corollary to their relationship. You want to model your relationship on an angry, controlling asshole and a cruel, spoiled brat? Er, have fun with that, kids. Harper Collins went so far as to release a “Twilight edition” of Brontë’s novel, bearing the slogan “Bella & Edward’s Favorite Book.” I’m sure Emily Brontë is THRILLED.)

2. It was first published under the name “Ellis Bell”

All three of the Brontë sisters initially published their works with masculine pseudonyms: Charlotte was “Currer Bell,” Emily was “Ellis Bell,” and Anne was “Acton Bell.” Charlotte Brontë wrote later that they did so because “we had a vague impression that authoresses are liable to be looked on with prejudice.” The pseudonyms caused confusion later, when some readers assumed that Ellis and Currer Bell were the same person, and attributed Wuthering Heights to the author of the very popular Jane Eyre.

The Victorian novel is famous for realism—a literary movement that sought to portray life as it really is, even in its most everyday occurrences. But in Wuthering Heights, Brontë goes out of her way to make the reader feel dislocated and unsteady, to make the narrative seem like it exists in a world entirely separate from our own. From the start of the novel, the geographic isolation of the novel’s setting—the fact that we, as readers, never move beyond the boundaries of Wuthering Heights and Thrushcross Grange—has us wondering where the hell we are. Add to that the novel’s multiple frame narratives (at one point, we are reading Lockwood’s account of Nelly’s account of Isabella’s account of what happened, and it's... bewildering), and the reader is left spinning, looking for something solid to hold onto, at once trapped within the novel’s complicated narrative framework and locked outside any true, direct understanding of what’s going on.

4. There are approximately three names in the whole book

Seriously, the names are insane: There’s Catherine Earnshaw, Catherine Linton, Edgar and Isabella Linton, Hindley Earnshaw, Hareton Earnshaw, Heathcliff, and—most ridiculous—Linton Heathcliff. The names get extremely confusing, but I think that’s the point: They contribute to the claustrophobic quality of the novel as a whole. As we watch these people grapple with each other, all bearing similar names and all related in one way or another, we get the feeling that there’s no escape from it—as in the Hotel California, “You can check-out any time you like, But you can never leave [Wuthering Heights].”

5. It was not an instant bestseller

Wuthering Heights received mixed reviews from critics when it came out in 1847. Even those who liked it seemed puzzled by it more than anything—what were critics supposed to do with this weird, but compelling book? One reviewer expressed the general sense of confusion:

Wuthering Heights is a strange sort of book,—baffling all regular criticism; yet, it is impossible to begin and not finish it; and quite as impossible to lay it aside afterwards and say nothing about it.

Others hated it full-out, and were not shy about expressing their dislike of a novel populated by “savages” and lacking a moral lesson. These are just a couple of my favorites, from two American magazines:

How a human being could have attempted such a book as the present without committing suicide before he had finished a dozen chapters, is a mystery.

6. Even Charlotte Brontë felt the need to distance herself from it

After Emily and Anne Brontë died in 1848 and 49, Charlotte Brontë continued to promote the works of her sisters. In the preface to the 1850 edition of Wuthering Heights, Charlotte writes of the novel’s power and her sister’s talent, but she also seems to feel the need to respond to the critics by making excuses for the novel’s “faults.” She blames the novel’s “rusticity” on Emily’s upbringing in Yorkshire, admitting that for those not raised in the North, “Wuthering Heights must appear a rude and strange production.” She also suggests that Emily was seized by inspiration and compelled to write what she did, as if she had no control over her writing; Charlotte writes that when Emily created her passionate, angsty characters, “Having formed these beings, she did not know what she had done.” We can see Charlotte here as a grieving sister trying to protect her loved one’s memory—but in the process, she strips Emily of her creative agency, recasting Wuthering Heights as the product of an almost supernatural vision, rather than artistic genius.

7. We don’t know where Heathcliff comes from

Heathcliff is one of the great mysteries of the novel. Why is he such an angry jerk? We know very little about his origins: All we’re told is that Mr. Earnshaw picked him up in Liverpool, he has dark hair and eyes, and, when he first arrives, he speaks “some gibberish that no one could understand.” Critics and readers have debated Heathcliff’s origins for more than a hundred and fifty years, without getting any closer to finding the answer. Because Liverpool was a major port for both Ireland and the slave trade, some scholars have proposed that Heathcliff may have been of Irish or African descent. The most recent film adaptation of Wuthering Heights (dir. Andrea Arnold), released in 2011, was the first to cast a black actor in the role.

OK, so this song really has nothing to do with the book’s writing—it was released by British singer-songwriter Kate Bush in 1978—but I love it. Written when Bush was only 18, “Wuthering Heights,” like most of Bush’s music, is beautiful, haunting, and really, really weird. In a high soprano, Bush takes on the role of Catherine’s ghost, beating on Heathcliff’s windows, wailing, “Heathcliff, it’s me, I’m Cathy, I’ve come home, I’m so cold….” The video is wonderfully bizarre, with Bush dancing and cartwheeling across the screen. And if you can’t resist performing this very special dance when you’re alone in your apartment, well, that’s completely normal, right? (That’s what I tell myself, at least.)

MTV made an adaptation of Wuthering Heights in 2003, and it’s precisely as terrible as you would imagine. Seriously, it is full-on, grade-A awful, and I watched the whole thing because I love Wuthering Heights that much. I think all I need to say about it is that Heathcliff gets his revenge by becoming a Rock Star! Just as god and the Brontë sisters intended.