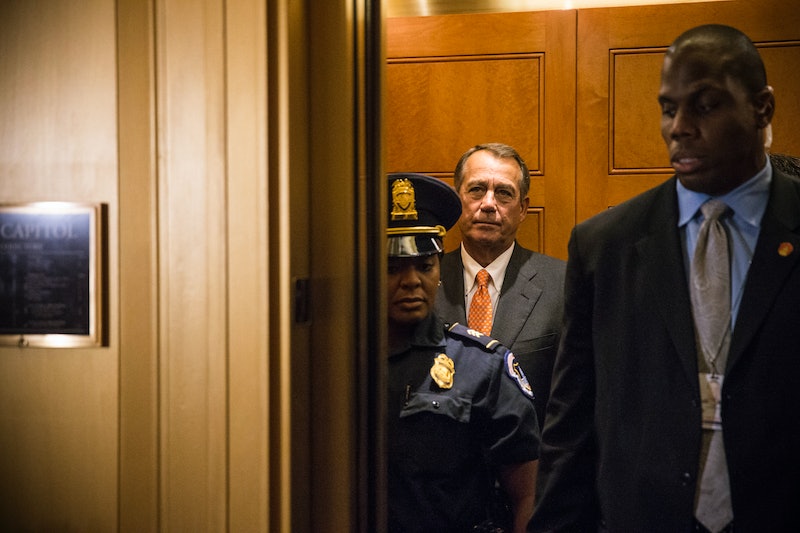 The Senate announced it has reached a deal on the debt ceiling Wednesday. The upper chamber announced a deal when the Senate reconvened at noon on Wednesday, ending weeks of uncertainty over the federal budget and the debt ceiling. "The compromise we reached will provide our economy with the stability it desperately needs," said Senate Majority Leader Harry Reid Wednesday. A vote is expected to take place later today.

But the fight is anything but over.

Already, the birth control mandate appears to be the new bargaining chip of choice for House GOP members, who can't seem to unite behind any other deal. Reports surfaced Tuesday that House conservatives now want to fund the government only until Dec. 15 in order to then force negotiations additional "conscience clause" exceptions to Obamacare's birth control mandate, even though the Senate has already agreed on a different funding bill.

As the birth control mandate now stands, religiously affiliated organizations do not have to directly provide birth control coverage to their employees if they object to doing so on a moral basis. Instead, the coverage will be provided by the insurance company, for the same end result. But now, critics in the GOP want to both expand the categories that fall under the exemption — and debate whether Obamacare's accommodation of religious groups goes far enough.

You might ask why conservatives would choose to wage this particular battle in December despite the fact that fighting against Obamacare has proved largely ineffective over the last two weeks. For some of the far-right members of the Republican caucus, the birth control mandate is a part of Obamacare they have to be able to tell their constituents they fought against.

"There are a lot of people, and I'm one of those, who are really pushing for a conscience clause to be included," said congressman Chris Stewart. "They want to have some principle that they could go home and say, 'we fought for this, and we got this.'"

Writing for Slate last week, Dahlia Lithwick termed this push to limit the birth control mandate a "conscience creep," defined as "a slow but systematic effort to use religious conscience claims to sidestep laws that should apply to everyone." Some institutions, Lithwick explained, even used the conscience clause to try to ban employees from unionizing, but more common targets are birth control and abortion.

It's about as unlikely that House GOP members will be able to push through additional exemptions as it is that they would be able to delay the individual mandate, given President Barack Obama’s firm stance that he will not negotiate with extortionists. But the emergence of this demand so late in the negotiating process highlights the ideological divisions within the party and the fact that any substantive proposals will have to be drafted in the Senate.

"It boils down to conscience protections that basically become compromised on the first of January, and that's bothersome to a lot of people," Steve Womack, a Republican congressman, said of the birth control mandate. Womack openly admitted that the he's not trying to block the unpopular individual mandate, which requires everyone to have health insurance in 2014, but just the one about birth control. "It concerns a lot of people in our conference that a provision of the Affordable Care Act goes into effect and that is a violation of the conscious beliefs of a lot of members of our party," Womack said.

You know what else is bothersome and concerning? An unplanned pregnancy.