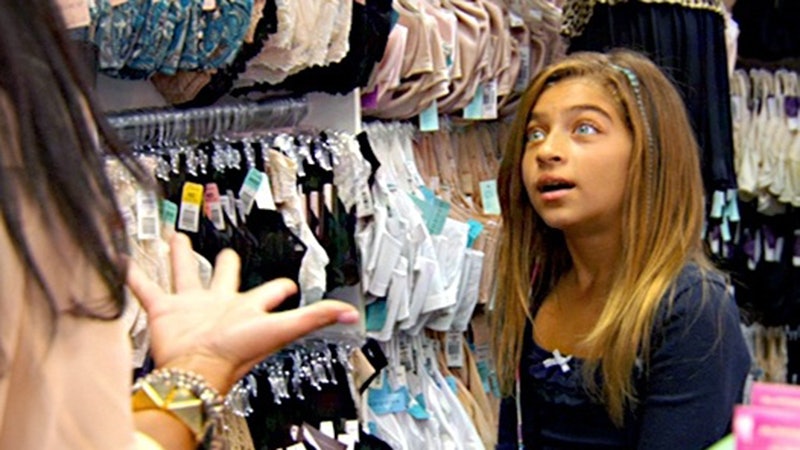 If you look back at your adolescence, chances are you can remember at least one embarrassing childhood story that seemed like the end of the world at the time. Usually, it involves the specific moment when you started to realize your own body insecurities — first periods, first bras, that sort of thing. Unfortunately, it's also usually that one moment that started a landslide of other insecurities later on in life. It sucks.

Most of us can name a few (or more than a few) things that we’d like to change about our bodies. Thick thighs, too-sparse eyebrows, even embarrassingly sweaty armpits are all common beauty concerns, even if it stems mostly from societal constructs. But it wasn’t always this way. In that magical period between childhood and adolescence, we all wandered around blissfully unconcerned about our own looks and likely rocking uneven bangs or a gap in our teeth.

Luckily, you’re not alone. As young women, we all struggle with societal pressures to look perfect from a very young age, but we can also choose to support one another and laugh at those shared moments of self-realization. We’ve all been there, and these funny, relatable and brutally honest tales from (totally anonymous) real girls will make you feel a little bit less alone — plus hopefully remind you of a time when you didn't give a crap about what people thought, so you can go back to that happy place more often.

1. When you first realize your limited assets…

“In middle school, we used to line up in the hallway while waiting to go into our next class. My girlfriends and I were standing across the hall from a group of boys, one of whom had had a crush on me since kindergarten. They were whispering and pointing, and I over-confidently assumed he was talking about me. Well, he was, but not in the way I imagined — a few seconds later he called my name and yelled 'You're flat!' across the crowded hallway while his idiot friends all laughed hysterically." —Amy, 25

“In early middle school, maybe 7th grade, my best friend's boyfriend told me that the guy who sat next to me in class had been 'accidentally' dropping his pencil on the floor so that I would pick it up for him — and then all the guys in the class would get to look down my shirt. After that day, I looked through all my clothes and tried to pick out shirts that were not at all low-cut to wear so I could avoid that whole thing. My friend made her boyfriend tell them to cut it out, which they did eventually, but it still made me so self-aware in a way that I don't think I'd ever been before.” —Mariana, 24

3. When you decide to shave your legs.

“In fifth grade, a guy I liked commented on my hairy legs. Maybe a week later I shaved my legs for the first time, and he said something again because he knew I had done it because he criticized me. I denied this, of course, but later I admitted to my best friend that I wanted to impress him. The whole thing was so awkward and humiliating.” —Sonya, 20

4. When you deal with acne — and all of the wonders that go along with it.

“As a high school freshman, I had terrible acne. I resorted to wearing a ton of foundation and concealer. I had a crush on a guy in school who was two years ahead of me. One day during lunch, we were flirting and he playfully smooshed ice cream in my face. Then he went to wipe it off, clearly taking off chunks of my makeup with it so there was more makeup on the napkin than ice cream. So embarrassing. (For the record, he dated me for two years anyway, and told me he thought I looked better without so much makeup.)” —Sarah, 26

5. When you're first introduced to the pitfalls of body image.

“When I was about 11, I was on a church retreat and we had to go around the circle and say something we liked about ourselves. Some people were saying like that they're good at sports and such, but I said I liked my legs. Everybody laughed, and I’m pretty sure that’s the inciting reason why I didn’t wear shorts again for the next 10 years until I was literally in college and noticed another girl about my size wearing shorts. She looked fine, and I realized maybe I could actually try them again, too.” —Martha, 23

6. When you get your first period… often in a crowded place.

“I was on holiday in Spain. I'd just started my period, which was a big abattoir-like mess. I got really ill. I was in my auntie and uncle’s apartment in the place we were staying and I'd gone to change my tampon in their bathroom. For some reason, I took it out and put it on the floor. I must have had the intention of then putting it in the bin, but forgot. [Later] I was chilling with my fam outside and out comes my uncle, dangling the tampon in the air from the string with a tissue in his hand. I was so ashamed! It still makes me feel wracked with shame when I remember it!” —Freyia, 25

7. When you get your first training bra.

“When I was in the fourth grade I played a fairy in a school play. I had to wear a white leotard and tutu. After the first dress rehearsal, my mom pulled me off stage and said, 'We need to go to the mall. Now.' Apparently the leotard was quite see-through, and everyone in the audience could see... well... a lot. So that's how I got my first training bra.” —Sarah, 26

More like this
These Artists Are Reimagining Black History Month To Create A Better Future
By Katie Mitchell
25 Inspiring Quotes From Black Women To Celebrate Black History Month
By Kyli Rodriguez-Cayro and JR Thorpe
19 Instagram Captions For Celebrating Black History Month
By Ayana Lage
42 Black Owned Fashion & Beauty Brands To Support Today & Always
By Mekita Rivas, Shea Simmons, Kui Mwai and Dominique Norman
Get Even More From Bustle — Sign Up For The Newsletter
From hair trends to relationship advice, our daily newsletter has everything you need to sound like a person who’s on TikTok, even if you aren’t.