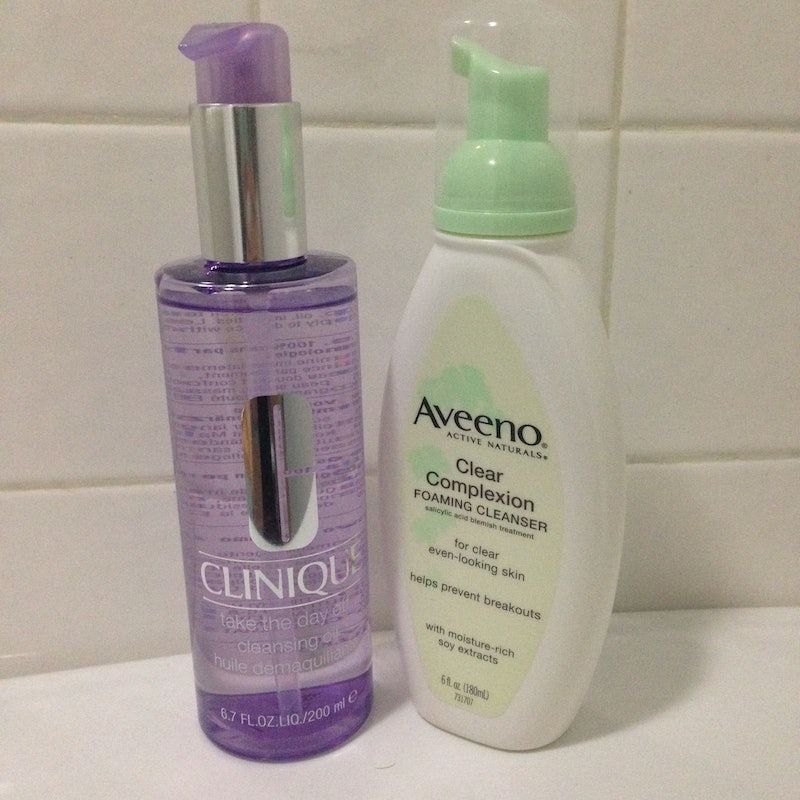 I’m not one for complicated skincare routines, in no small part because I’m not even entirely sure I know how to wash my face correctly. Do I use hot water, or cold? Am I supposed to use a washcloth, or is that unhygienic because of bacteria? Is it a cardinal sin if I don’t take off my makeup before I wash my face at night? How do I know I rinsed all the lather off? Can people wash their faces by splashing it with water like they do at the end of Neutrogena ads? What does “massage lather into face” really mean, anyway?

Given my propensity for laziness — which I can fortunately get away with due to some generous genetics from someone somewhere down the line — I strive for convenience above all else when it comes to skincare. Even my process for choosing a face wash is rooted in simplicity. I’m usually so overwhelmed by choices at Duane Reade that I’ll grab whatever is on sale that has a bit of salicylic acid, because my uncle who’s a dermatologist told me that it's good to use a face wash with salicylic acid to manage breakouts, so I’ll use that until it’s gone and then I’ll drag myself back and pick whatever the next cheap face wash with a bit of salicylic acid is on the shelves.

This is why I’m probably the last person you’d expect to give double-cleansing a try. The whole thing sounds totally high maintenance, and slightly obsessive, especially for a girl who often forgets to wash her face at all. But try it I did because, in spite of my better-than-average genetics and recent increased intake of water, I’ve been breaking out on my forehead and my chin. I've also been suffering from a nasty bout of dry skin on my cheeks, in part because of the brutal winter we've been having in New York City followed by a quick transition into spring. I needed to take control of my skincare routine, since my lack of routine clearly wasn't working.

Enter double-cleansing, which is exactly what it sounds like. You wash your face two times. First with a cleansing oil, then with a face wash. Starting the routine with oil seems like a great way to clog pores rather than clear them out, but there's a method to the madness, and the routine has been practiced by Japanese women for centuries for a reason. The theory is that cleansing oil removes the initial layer of dirt and grime and dead skin cells from your skin, pulling those nasty bits out of your pores and allowing the face wash you normally use to really get in there and do its job more effectively. It's also supposed to be a gentler way of removing makeup; rather than hacking away at the gunk on your eyelids with a cotton pad or some other abrasive material or product, the oil supposedly whisks it away.

After some Internet research, I settled on Clinique’s Take The Day Off for a cleansing oil. (I was between that and Shiseido's Ultimate Cleansing Oil, but they only had Clinique's cleansing oil at Sephora when I went.) The face wash was my high school go-to: Aveeno Clear Complexion Foaming Cleanser. I chose this one because it's familiar, and I figured if something wonky happened after a week, I would want to know what caused the problem. Since I've never had an issue with the Aveeno cleanser, it seemed like a good control to pair with a new product.

Despite my initial intimidation, the process of double-cleansing was actually pretty simple. I washed my hands, because that's a good thing to do before you touch your face, and subsequently dried them off. With my clean, dry hands, I squeezed two pumps of the Clinique cleansing oil and just rubbed it into my face, no fancy massaging necessary. (Applying the cleansing oil with dry hands is important. If your hands are even slightly damp, you'll emulsify the oil too soon, and it won't be nearly as effective.)

Once applied, the oil dissolved any makeup I had on my face, even the densest, darkest waterproof mascara. I've never used an easier, more efficient makeup remover than this cleansing oil, and a little bit went a very long way. After I felt the oil was sufficiently rubbed in and my makeup was sufficiently annihilated, I splashed my face with water. I wouldn't have to be too worried about having to dry my face because I immediately lathered a couple pumps of the Aveeno face wash onto my already wet face. That had to be "massaged to a lather," but once it was, I rinsed my face, patted dry, and that was it.

So did a week of double-cleansing every night improve my skin?

I'd say yes. The picture on the left is from the beginning of the week, and one on the right was taken first thing after waking up, after a full week of this routine. The acne that had been emerging on my chin disappeared, and my skin was much calmer. Double-cleansing also felt really good, especially on days when I was wearing more makeup than usual. My skin felt clean and refreshed every night before going to sleep, and I would wake up with skin more radiant and moisturized than I've ever had.

Overall, the routine is more sustainable than I thought it would be, in part because it combines the makeup removal with the act of face washing. I was tricked into being a responsible face washer in one fell swoop, with noticeable, positive results to boot, which is every lazy girl's skincare dream.