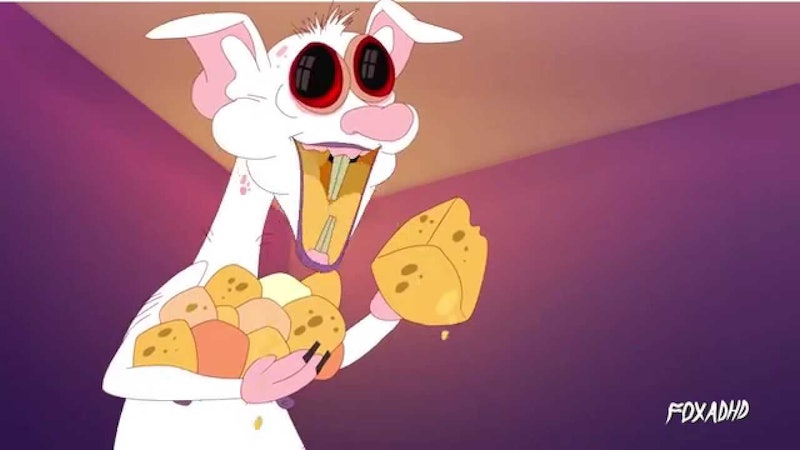 Here’s a funny, disturbing take on a beloved kid’s show that highlights the very real horrors of animal testing. For children of the ‘90s, Pinky and the Brain needs no introduction, but for the rest of you, here’s the rundown: Pinky and the Brain was a beloved, eccentric animated TV show that ran from 1995 to 1998. It’s about two rats (Pinky and Brain, natch) who are genetically enhanced in a research lab—Brain becomes a hyper-intelligent megalomaniac, and Pinky becomes are good-natured idiot. Every episode, Brain attempts, and fails, to take over the world. In a new video short for Animation Domination Hi-Def, writer and comedian Heather Anne Campbell reimagines the show’s theme song through a “scientifically accurate” lens, highlighting the fact that, if they were real lab rats, Pinky and Brain would live horrific lives dominated by suffering. As Campbell sings, “Steven Spielberg [who was executive producer] made what might be the darkest children’s show.”

Just as a reminder, this is what the scientifically inaccurate Pinky and Brain look like:

In this version, after being mutilated, tested on, and tortured, the beloved characters become considerably more gruesome:

As Campbell points out, there are a lot of companies that continue to test products on animals, so it’s up to us to do our due diligence and support companies that don’t test on rats, dogs, and other animals. As The Huffington Post points out, in the case of cosmetics, at least, there are a wide variety of alternatives to animal testing available; these alternatives are effective enough that the European Union was able to ban cosmetics developed through animal testing completely in 2013. If you want to avoid animal-tested products but don’t know where to start, check out this app, which lets you scan product barcodes to find out their companies’ stances on animal testing.