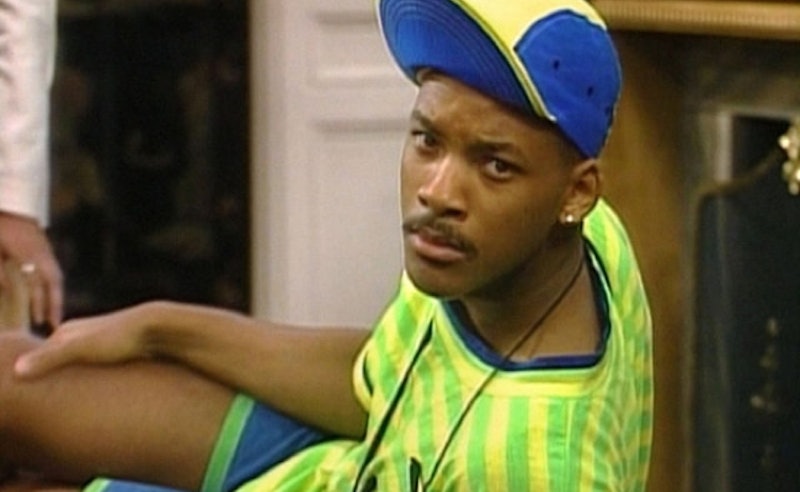 In case you didn’t already realize that The Fresh Prince of Bel-Air was a TV show, it spent a good amount of time playfully reminding you of that fact. Will Smith’s early ’90s sitcom had a PhD in breaking the fourth wall, constantly cracking jokes about in-universe inconsistencies, making references to its cast members’ real life affairs, and engaging its characters in direct conversation with the audience. Heck, Fresh Prince wasn’t even confined to the parameters of its own set. (Remember when Carlton ran screaming through the audience?)

Although it was in the fashion for family sitcom heroes to speak openly with viewers at home — Saved by the Bell is a well-known example — Fresh Prince distinguished itself with a wry attitude embracing Will’s occasional asides. It was, at times, not unlike The Office's Jim Halpert and his now-infamous camera side-eyes and bemused expressions.

Did Fresh Prince nail the “breaking the fourth wall” gambit? Do we remember scene re-dos, the Banks’ ceiling-less house, and jokes about Little Nicky’s Jack-like rate of aging fondly? And which of the jokes were more memorable to us compared to the countless others?

Maybe a quick look back at the jokes will help us decide. Even if it doesn't, well, a little trip down memory lane never hurt anyone.

The series was riddled with punch lines spoken (or sneered) directly at the camera, with Will interacting with the viewing audience as if we were a character on the show ourselves. These nonverbal looks were frequent, yes, but that just gave us a broad range of moments from expected to hilarious.

The show made a number of references to the fact that they replaced Janet Hubert-Whitten with Daphne Maxwell Reid the beloved Aunt Viv, generally by using Jazz as the comedic halfway point between the main cast and the audience. Somehow, coming from Jazz, the change in actresses became a hilarious one-liner instead of a cause for confusion and upset.

Every once in a while, the Fresh Prince writers would make funny reference to Will Smith’s music career, having his, or someone else’s, character speak sarcastically about his talent or familiarity with the music industry. At one point, Will sarcastically said, “Yeah, and I have a Grammy,” while another memorable gag had Carlton belittling Will and Jazz by asking, “What do you two know about the music business?”

Multiple jokes were made about the series’ catchy opening theme song. One gag had Will spouting its lyrics to a court judge, while another had him using the same lyrics to tell Carlton about his childhood in Philadelphia. That's just to be expected when the theme song acts as musical backstory for the main character.

Remember the “Will wants to stay in Philadelphia” cliffhanger? In this infamous instance of fourth wall-breaking, the series simply turned what was set up as a weighty ordeal into a one-off gag. NBC producers tossed him into a van and drove him back to Bel-Air in keeping with the show’s title — thank goodness.

In a similar moment (though on a smaller scale), an episode once wrapped up its lesson about studying by having Carlton suggest he and Will “redo” the final scene to play up the value of hard work and demonize cheating. Hey, every comedy needs to have a moral to its story.

But Fresh Prince was never satisfied with just breaking the fourth one. Once, they broke a fifth one. After listening to his cousins celebrate how rich they were, Will turns straight to the audience and directs the camera up to where the set’s ceiling would be — if they were rich enough to have one.

Along the same vein as the mystery of the disappearing ceiling, there was Uncle Phil’s vanishing act courtesy of Will’s remote control. Surprisingly, though the gag predates Adam Sandler's Click, I'm pretty sure Sandler didn't cut Smith a check for that brilliance.

A favorite entry, used to close out a particularly high-concept episode, had Carlton running well beyond the confines of his domestic set, sprinting out onto the stage and into the studio audience in mock panic. No, it didn’t make a lick of sense, but it was the most hilarious gag of them all.