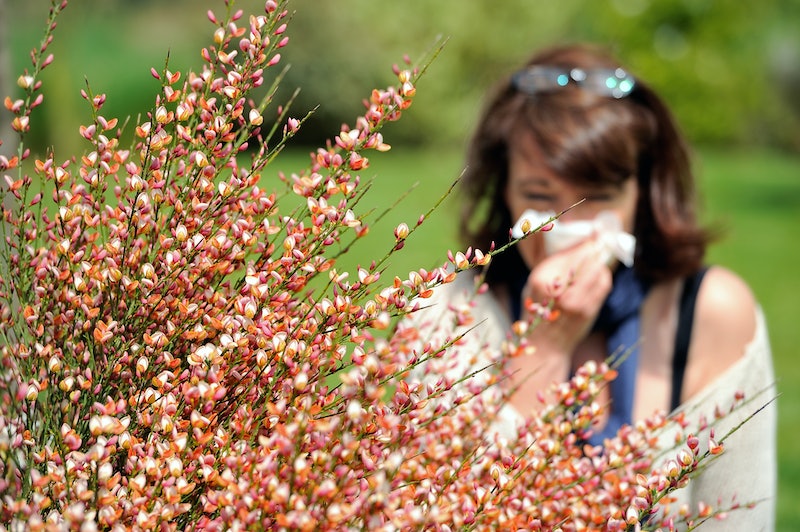 Spring is here, and while that warm weather is great and all, for many, it can also come with one major downside — allergies. The Asthma and Allergy Foundation of America (AAFA) recently released its annual roundup of the worst cities for allergies, and are you ready for the results? Was that a yes? Well you’d better get your eye drops and tissues ready if you live in the South, because the pollen count across ‘Merica ain’t playin,’ especially in Tennessee.

Turns out, the West isn’t so wild when it comes to spring allergens this year — for the most part western states managed to avoid the top 10, although parts of Kansas, Texas, and Oklahoma look like they're in for a rocky season. Cities in the Northeast also largely missed out on the top 10 (except for you, Provincetown... sorry!). As for the rest of the country? They’ll just be wishing you well behind those puffy eyes and running noses, I’m sure (those tears are just from all the flowers blooming — they’re really glad for you, promise).

Thanks to the AAFA’s findings, we have the ability to avoid these allergy prone cities (you know, unless you live there and then honestly your sinuses are screwed). What criteria did the AAFA base its findings on, you ask? These cities are ranked according to pollen levels, amount of allergy-meds used, and number of allergists in the area.

So which places made it to the top of the list? Here are the five cities expected to experience the worst allergy symptoms from this month on.

Knoxville-based allergist Dr. Robert Overholt told CNN that the abundance of vegetation and lots of moisture sets the city up for allergens wreaking havoc. Oak, maple, and pine pollen are mainly to blame with tree pollen at its worst in March, April, and early May, and grass pollen at its highest in April, May, and June.

Like other humid cities in the south, Memphis has a higher-than-average allergy season since pollen thrives in humid weather. More specifically, pollen peaks midday. (Great, right in the middle of your work day.)

Because winters are very short and tame in Oklahoma, Oklahoma City has a longer pollen season than other places, prompting pollen to become active earlier (as early as February). The most damaging allergen usually stems from tree pollen, which more specifically comes from the mountain cedar trees. Even at a distance, allergy sufferers aren't safe. Did you know that tree pollen can be transported hundreds of miles?

Unfortunately, Louisville's beautifully renowned springtime is overshadowed by allergy symptoms plaguing residents. In fact, the pollen count is so high, the sidewalks have been reported to become yellow.

The city has been known to have a low number of board certified allergists per patient, and an extremely high pollen count. Because of this, Jackson residents with allergies rely on medications to manage symptoms that are usually the result of trees: local red cedar, hackberry, elm, willow and poplars.

Check out the AAFA for the full top 100 list.