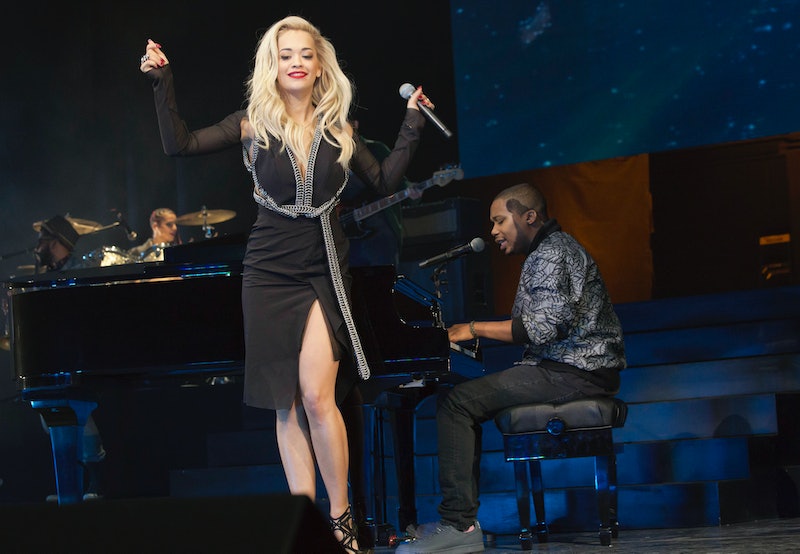 When Empire's first season ends on March 18, it promises to go out with a bang. As we've learned to expect on the show, there's going to be a whole load of guest stars, and they're all over the musical map: Snoop Dogg, Jennifer Hudson, Patti LaBelle, Rita Ora, and Juicy J are all set for guest-starring roles. Another, less known name is slipped in there, too: Charles Hamilton. So, who is Empire guest star Charles Hamilton, and what is he going to do on the show?

Like many of Empire's guest stars, Hamilton is in the music biz. He's a rapper and producer, and on Empire, will play a role he should find pretty easy: himself. He'll be performing his song "NY Raining" on the show with Rita Ora, who gives the track some pretty high praise. "'NY Raining' is one of my favorite songs that I have recorded," she told Billboard. "I am so honored to have been asked to perform it with Charles on the Empire season finale." That certainly has me looking forward to hearing the track. Hamilton doesn't have a full-length album with the song on it out yet, but it is featured on the Empire soundtrack.

It's pretty amazing that Hamilton is going to appear on the show; he's been pretty elusive since a series of strange, high-profile interviews that turned out to be, as he told Billboard, a struggle with mental illness. "I wanted to commit career suicide, physical suicide, spiritual suicide — I didn't care anymore," Hamilton said. "I just didn't trust anybody. I didn't leave my house, I just made music all the time. I was fighting depression — I shut myself in...I locked myself in my house with the lights out and a turntable turning with no record on it. I was depressed, paranoid and confused." But Hamilton eventually sought mental help, was signed to Republic Records, and his stint on Empire suggests that things are on track again.

Looking for a sneak peek of "NY Raining"? Someone recorded Hamilton doing it live (sans a live Rita Ora, who can only be heard through a recording) during a performance at the Sayers Club.

I have a feeling that, after it debuts on Empire, this song will be huge.