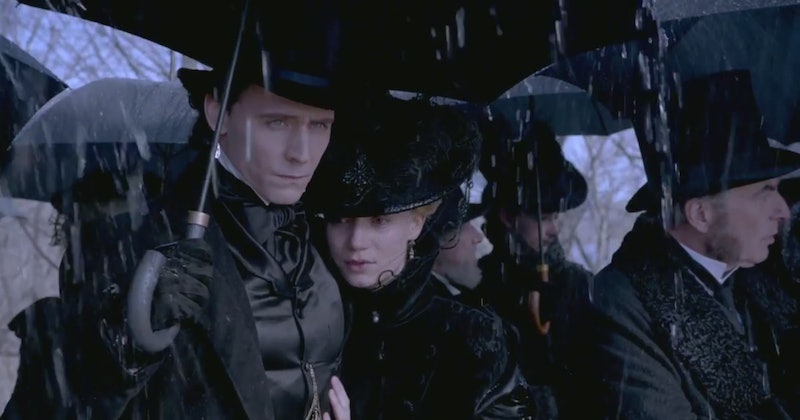 When I first saw the trailer for Crimson Peak I noticed it was definitely tapping into a creepy side, but just how scary will Tom Hiddleston's Crimson Peak be? The premise of the film is that everyone is living in "a house that breathes, bleeds... and remembers." And if that wasn't unsettling enough, two very knowledgeable sources have confirmed that the movie is really frightening. Although it doesn't premiere until October, Master of fright Stephen King recently saw a screening of the movie and he had high praise for the scare factor.

"Crimson Peak electrified me in the same way Sam Rami's Evil Dead electrified me when I saw it for the first time way back in the day," the author tweeted. "Gorgeous and just f***ing terrifying."

King's son Joe Hill, who is also an author, was on hand to see the movie too and had nothing but kind words for the terrifying flick. "Crimson Peak is [director] Del Toro's blood-soaked Age of Innocence, a gloriously sick waltz through Daphne Du Maurier territory," Hill tweeted. (Du Maurier wrote The Birds which Alfred Hitchcock later adapted.)

It's rare that a scary movie also retains a kind of elegance about it, but it seems like Crimson Peak has done just that. King and Hill just made me even more excited to see the beautiful, terrifying film this October. Provided I can handle watching anything that freaked out Stephen King, that is.

More like this
These 25 International Horror Movies On Netflix Prove Fear Is A Universal Language
By Bustle Editors
'The Ex-Wife’s First Look Pics Are Giving 'Gone Girl' Vibes
By Bustle UK
What Reporting On The UK’s Most Prolific Cyber Stalker Taught Me
By Sirin Kale
Paul Mescal, Man Of Mystery
By Samantha Leach and Heather Hazzan
Get Even More From Bustle — Sign Up For The Newsletter