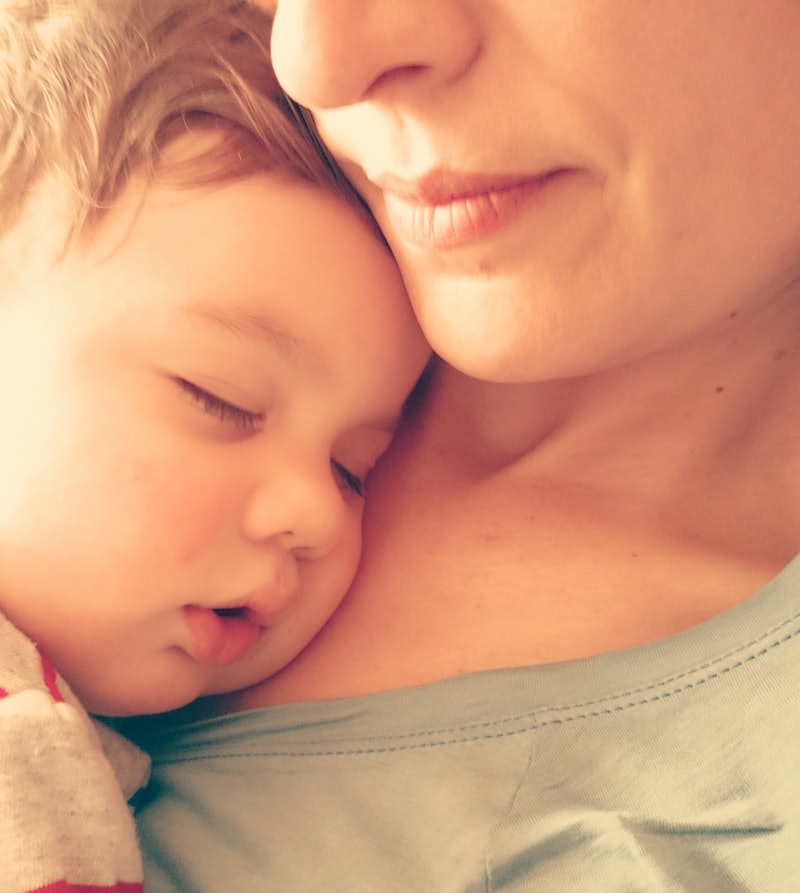 And today in somewhat discouraging news, we have yet another instance of a mother being shamed for breastfeeding her baby. Here's what went down, according to KFOR News: On Wednesday, March 11, new mom Tiffany Hoag was in the locker room at the Earlywine Park YMCA in Oklahoma City at around 4:15 in the afternoon. Her baby, who was just eight weeks old, needed to eat, so she did what any responsible mother would do and started feeding him. She wasn't the only mother breastfeeding in the locker room at the time; a second mom nearby was also nursing her baby.

But then a YMCA staff member entered the locker room: “The next thing you know, she's escorting this lady out of the locker room,” said Hoag to KFOR, “and then she comes back from me and says, 'You can't be in here, I'm going to have to ask you to leave.'” The staff member then brought Hoag to the “family changing room,” which consisted only of a toilet, a shower, a small chair, and a sink. Hoag also said it was dirty and had towels strewn across the floor, as seen in pictures she posted on Facebook:

“I was really embarrassed and upset because a lot of people were looking, and [my baby] was crying because he was still hungry,” said Hoag about the incident — which is the part that really gets me. I mean, nothing about this story is good, but to me, that's the most heartwrenching part. Newborns need to eat every two to three hours, because they're newborns. You can't just say, “Hey, Baby, now's not a good time, can you wait another hour or two and then we'll get a snack?” It's essential for their development that they eat when they're hungry, no matter how frequently that might be. Furthermore, it's ridiculous to expect new moms to remain sequestered out of sight until their child is past breastfeeding. Hoag noted that she felt “humiliated,” which is not something someone should ever be made to feel for being a responsible carer. I don't blame Hoag for saying that she never wanted to go back to that YMCA location again.

For their part, the YMCA both apologized for the incident and launched an investigation about it; they released a statement after the story started going viral, which reads as follows:

“The Y is a place for families, and we support breastfeeding moms in our facilities. We believe this was likely an unfortunate mistake with our staff member misinterpreting our locker room policy, which states that children are not allowed in adult locker rooms. We are looking into this particular incident further with the staff members involved in an effort to ensure that no other moms have this happen in the future. We are very sorry that this new mom had a negative experience and will continue to train our staff to understand that moms can breastfeed anywhere they would like to do so in our facilities.”

I suppose at least the whole thing seems to be the result of either one particular employee or employees at one particular YMCA, not of the organization in general — but at the same time, I'm not really sure that's much better. Yes, it's a boon that the YMCA has made clear in no uncertain terms that they support breastfeeding in public; but the fact remains that as a country, we're still so stuck in our outdated Puritanical views that we kick up a fuss at things like this. And even more discouraging? Despite their apology, this is the 38th incident of a mother being told she could not breastfeed her child at a YMCA location. Not OK. Not OK at all.

Here's the thing: Breasts are not inherently sexual. No parts of the body are inherently sexual. The body itself is not inherently sexual. Anything remotely connected to your physical person only becomes sexual when you're actually doing something sexual with it. We have to stop shaming people for their bodies, especially when they're doing something like using them to feed another tiny human being. So let's get to work on normalizing it, shall we? One way to do it is to arrange nurse-ins, which is what Hoag and two other area women did at the Earlywine Park YMCA in response to Hoag's experience a few days ago; another is to share and celebrate photos like Jacci Sharkey's graduation pictures.

And let's not forget to educate ourselves, too. Breastfeeding laws vary from state to state, but all 50 states have at least some legislation in place that either allows breastfeeding in public or prevents breastfeeding mothers from being prosecuted for public indecency or indecent exposure. Furthermore, it's legal in 46 states, including Oklahoma, for mothers to breastfeed anywhere, whether it's in public or in private. It's high time we all got familiar with these facts, so read up — and internalize what you read. Maybe then we'll stop looking at breastfeeding in public as something “bad” or “shameful” and see it for what it really is: A simple and essential part of life.

More like this
Black History Month UK’s 2022 Theme Calls For Action, Not Words
By Maxine Harrison
Chris Kaba's Family Continue Fight For Justice After Viewing Police Bodycam Footage
By Sophie McEvoy
Women Around The World Are Cutting Their Hair In Solidarity With Mahsa Amini
By Darshita Goyal
How To Politely Reject Someone Who Keeps Asking You Out
By Laken Howard and Lexi Inks
Get Even More From Bustle — Sign Up For The Newsletter