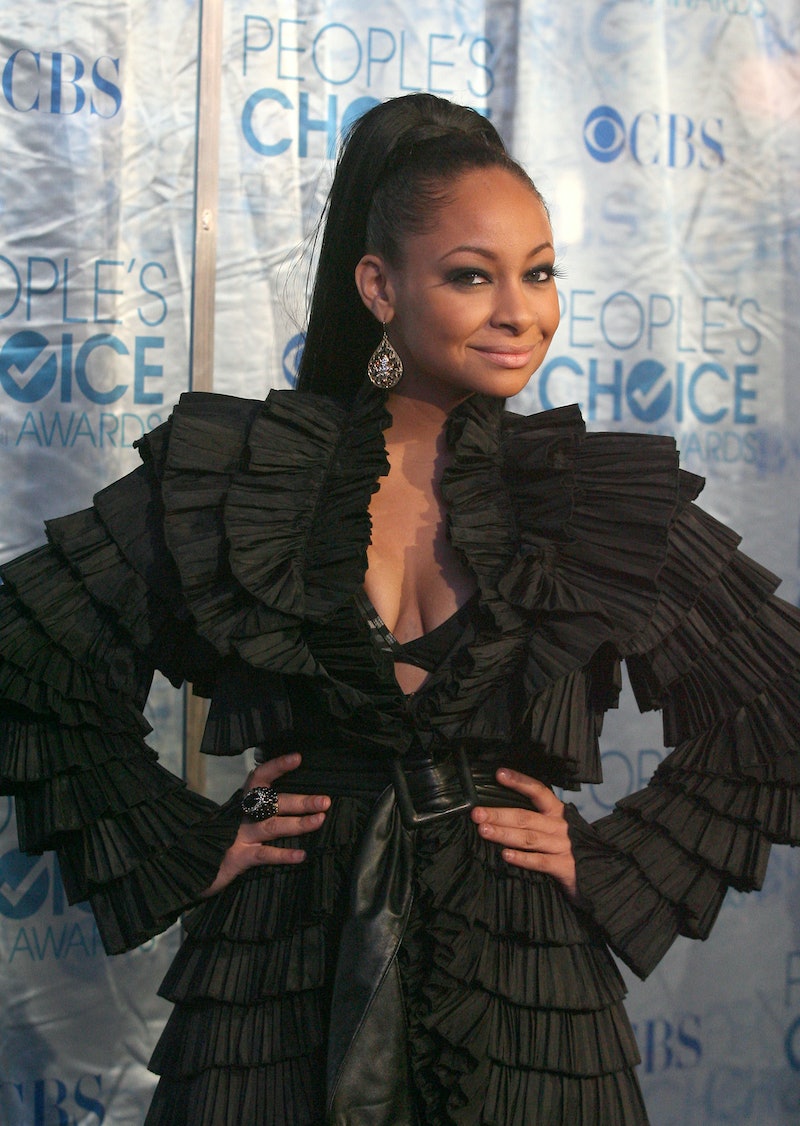 It looks like Raven-Symoné is in some hot water again for her comments regarding race and racism. The Disney Channel alum appeared as a guest host on The View on March 16, where she chimed in on a discussion about a Univisión host who was recently fired after he made an offensive comment comparing Michelle Obama to a cast member on Planet of the Apes. And Raven-Symoné's opinion on the controversy was quite unpopular, to say the least. Raven-Symoné defended the fired Univisión anchor by saying "some people look like animals."

Shortly after Whoopi Goldberg began the discussion about Rodner Figueroa, Raven-Symoné said, "Was he saying it racist-like? Because he said that he voted for her later and I don't think he was saying it racist." Her fellow co-hosts remained unconvinced, but she followed up her comments later in the discussion by saying, "Michelle, don't fire me from this right now, but some people look like animals. I look like a bird! So can I be mad if somebody calls me Toucan Sam?"

Raven-Symoné's comments drew a lot of tension and criticism from fans and viewers. She took to Twitter the day after to further defend and expand on her comments, but her argument and explanation unfortunately did not seem to make much sense. Check it out:

While it is true that care should absolutely be taken to differentiate rude comments from racist ones, it is undeniable that words like "ape" and "monkey" have an ugly racist history in our country. Regardless of what race you are, it is irresponsible to overlook the beyond problematic connotations that accompany a comparison between a black person and a cast member of Planet of the Apes, of all things. It is a head-scratcher as to how Raven-Symoné could have not made that connection in the first place, and her tweets offer no further clues.

She then goes off on a tangent about how her comments are not "based off race." But the thing is, regardless of what race she is, this particular conversation is about race. That is reportedly the whole reason the host was fired, and the whole reason why this is still such a hot topic of discussion. Raven-Symoné does not do herself many favors by saying now that she is not trying to be another race. In fact, that will likely remind people of her controversial description of herself as "colorless" in her interview last year with Oprah Winfrey.

And then she segways into a random praise of America and its different cultures. Yes, our great country is diverse, but saying the United States has a rich history with a lot of different cultures does not mean that what Figueroa said was not racist or could not be seen as racist. And saying that her comments were not based on race also does not mean what he said was not racist. Yes, Raven-Symoné is entitled to her opinion, but it looks like she's having some difficulty defending it. We will have to see if she clarifies her comments a little more at a later time.

And because she asked, yes, she can be mad if someone calls her Toucan Sam.

More like this
The Lionesses Are Calling For Equal Access To Football In Schools
By Sophie McEvoy
Charlene White & MPs Lead Tributes For Bristol Bus Boycott Organiser Roy Hackett
By Sam Ramsden
'The Capture' Is Finally Back – & S2 Looks Tense AF
By Sophie McEvoy and El Hunt
It’s Official: The Bachelorette Is No Longer A Fairy Tale
By Samantha Allen
Get Even More From Bustle — Sign Up For The Newsletter