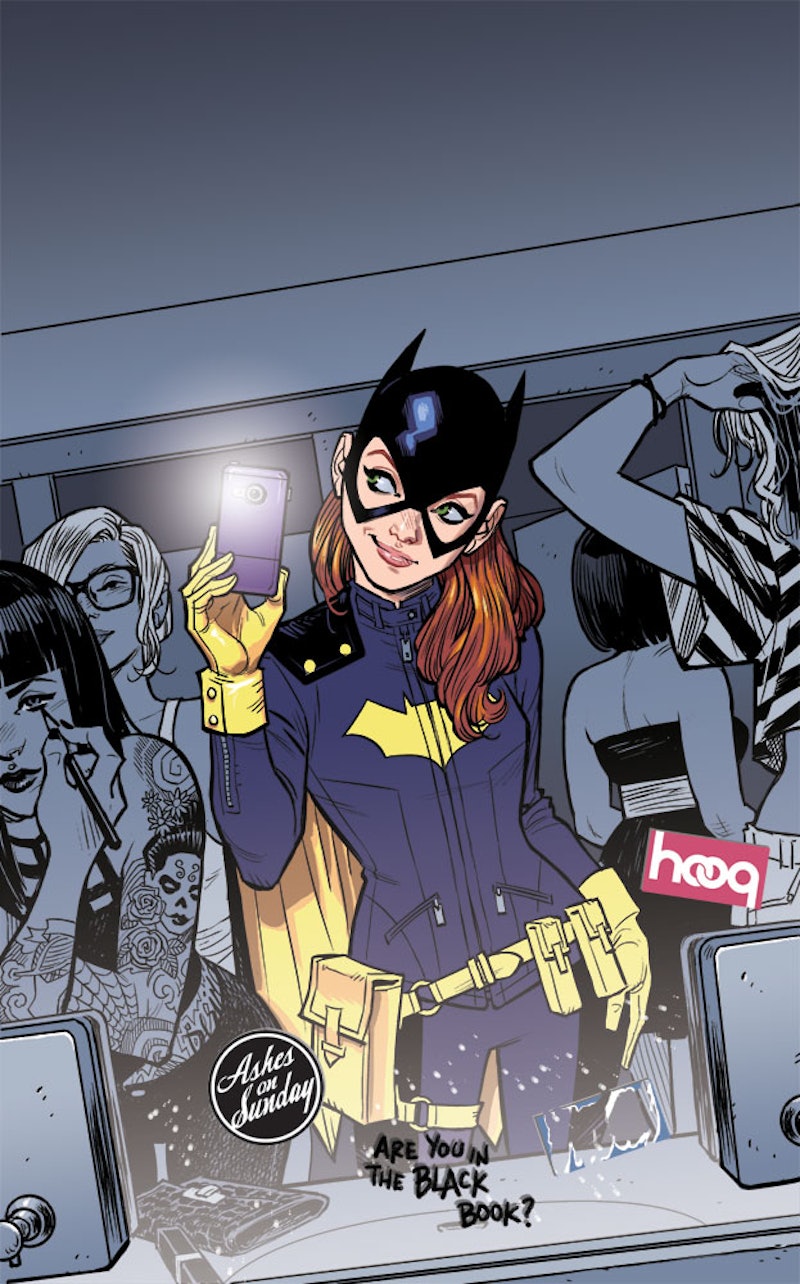 Following a heated Twitter battle at the hashtag #changethecover, DC Comics announced that it would not release a controversial Batgirl cover, and both the creative team behind the series and the artist himself backed the decision. As part of the 75th anniversary of notorious Batman villain the Joker, several issues of DC Comics will be released with variant covers featuring the character. Many, including Cameron Stewart, who created this new iteration of the comics, believe that Batgirl's variant cover depicted sexual assault, to the insult of the comics' strong young female audience.

Stewart took over the Batgirl franchise, and at his and his creative team's hand, have given the series a brighter, younger, and more vibrant tone and storylines that have Barbara Gordon as Batgirl taking out villains like purveyors of revenge porn. Essentially, feminists can really get behind this superhero. Which is why artist Rafael Abuquerque's Joker variant cover, which presents Barbara Gordon literally crying in the grips of the Joker, is even more upsetting. Not only does it depict an image with strong sexual assault undertones, but it is at odds with the heroine that Stewart has been portraying, and is directed to an audience of young women.

Immediately after the variant cover was revealed, a campaign to #changethecover sprouted up on Twitter, though it was quickly overthrown by pro-cover users who called the move "censorship." But Stewart himself spoke up against the cover, in a series of tweets that stated:

The cover was not seen or approved by anyone on Team Batgirl and was completely at odds with what we are doing with the comic.

So, we have the creators of the book and the artist himself all agreeing that the cover was inappropriate. There’s no "censorship" here.

If you’re concerned about artistic integrity and creative vision - that’s what we’re doing. Keeping the integrity of our book intact.

For non-comic book nerds in the house, there is a reason Abuquerque rendered the cover this way. In the comics, Barbara Gordon and the Joker have a long and traumatic history. In Alan Moore's famous The Killing Joke, the Joker paralyzes Gordon with a gunshot that severs her spine, then he undresses her and takes photographs. The trauma Gordon experiences is a driving force in her character as she grows into Oracle, a wheelchair-bound hacker who helps the Justice League. However, Susana Polo at Polygon points out that The Killing Joke is widely criticized, even by Moore himself, as a sexist storyline that only serves to push the character arcs of the men in the comics.

So yes, Abuquerque was inspired by an event in Batgirl's storied history with the Joker. But still: Really? Polo adds that one of the Robin iterations Jason Todd was killed by the Joker, but would we ever see Robin crying in the Joker's grasp on the cover of his own comic? I can answer that: No, unequivocally not. Eventually, Abuquerque decided to pull the artwork, releasing this statement:

My Batgirl variant cover artwork was designed to pay homage to a comic that I really admire, and I know is a favorite of many readers. 'The Killing Joke' is part of Batgirl's canon and artistically, I couldn't avoid portraying the traumatic relationship between Barbara Gordon and the Joker.

For me, it was just a creepy cover that brought up something from the character's past that I was able to interpret artistically. But it has become clear, that for others, it touched a very important nerve. I respect these opinions and, despite whether the discussion is right or wrong, no opinion should be discredited.

My intention was never to hurt or upset anyone through my art. For that reason, I have recommended to DC that the variant cover be pulled. I'm incredibly pleased that DC Comics is listening to my concerns and will not be publishing the cover art in June as previously announced.

Gordon and Batgirl have a huge storyline full of heroic, badass events, so it should have never been even a passing idea to, on the cover of her own comic, reduce her to a victim.

More like this
10 Must-Read New Books Out This Week
By K.W. Colyard
Viserys’ Fate On 'House Of The Dragon' Could Differ From The Book In This Surprising Way
By Grace Wehniainen
Read The First Pages Of Emma Rosenblum’s Highly Anticipated Debut, 'Bad Summer People'
By Samantha Leach
The BBC Is Adapting A Best-Selling Novel About A Mistaken Killer
By Darshita Goyal
Get Even More From Bustle — Sign Up For The Newsletter