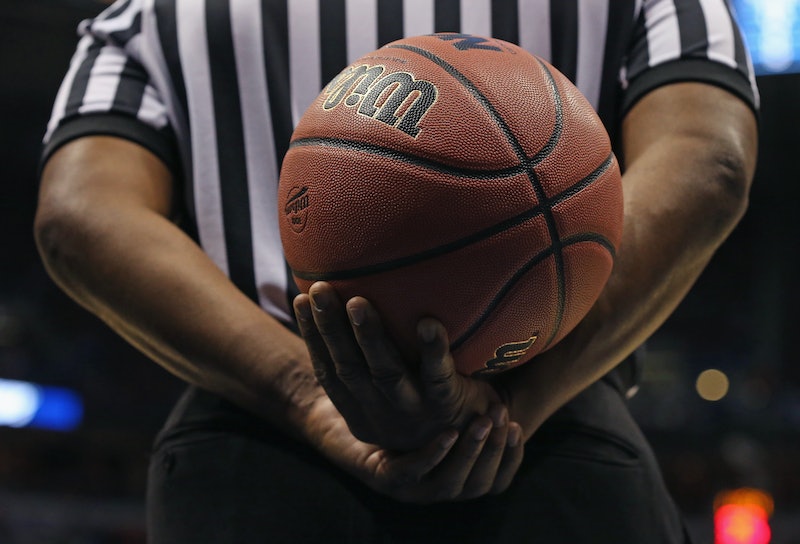 This week, my boyfriend's sister invited me to join their family's March Madness bracket, which was incredibly flattering. The only problem is, I didn't even know what March Madness was up until that point. I knew it was something to do with basketball and that Rihanna sang its official song. To give you some context, my boyfriend's family are all fabulous, and they are all all-American sports fans with a great wealth of knowledge on all sorts of sports things. By comparison, I am an Australian who's only ever followed Australian Rules Football, and never been able to muster up true disappointment over a sports loss because it's something that's entirely out of my control, and there's always next year, right? WRONG, apparently. For true sports fans, I've learned, defeat is depression.

So me, big fat sports moron, whose knowledge of basketball extends to "LeBron" (not anything about LeBron, his team, or the way he plays, but just simply that he exists, and that I wouldn't kick him out of bed), and a desire to meet a basketballer and have him hold me in the open palm of his hand as I sit cross legged in it (me being 5'1", him likely being 6'8"), is doing a March Madness bracket. I chose all my teams by "places I've been" or word association (i.e., Virginia sounds like "vagina" and I have one of those, ergo, I choose Virginia), just to give you an example of where I'm at with this mentally. Here are a bunch of questions I have about March Madness, which you've probably had too if you know nothing about basketball and have been asked to join a bracket:

What hurt March? Why can't March just be happy?

Apparently this is college ball and Lebron doesn't play in that.

3. What do I do without Lebron?

HE'S THE ONLY PLAYER I KNOW. Why can't he just play a few games?

4. Are any of the people on these teams in horrible fraternities?

Because if they are, we shouldn't be glorifying them.

6. Do Jay Z and Beyoncé sit in the front row at these games?

Things could get REALLY exciting if they do!

7. Do you think I could run between a basketballer's legs without crouching down?

This is actually my only concern about basketball. The ratio of their height to mine, and what sort of weird circus couple stuff we could pull off to blow people's minds.

8. How come I have to choose every week's winner at once?

In the bracket, you have to make all your picks right up to the end without knowing which teams win each week, which means you can't even learn as you go! TERRIFYING.

9. This doesn't look like enough teams, surely there are more colleges than this?

There's only about sixty or so teams on the bracket... Where are all the other colleges?

10. Why do people care so much about college sports anyway?

I don't understand why this matters.

Now that I've filled out my bracket, am I obligated to sit through a thousand basketball games?

I know that's not a question, but I really am.

13. No seriously, I'm an educated human and I have no idea what's going on.

Again, not a question. But seriously, HELP ME.

14. Can I just stand here yelling "De" and then holding up a picture of a fence to trick people into thinking I know what I'm doing?

Because this is actually something that I think is really awesome about basketball. "De" + a picture of a fence. Who even thought of that and how do I shake their hand?

15. Where is Rihanna? Why isn't there more Rihanna?