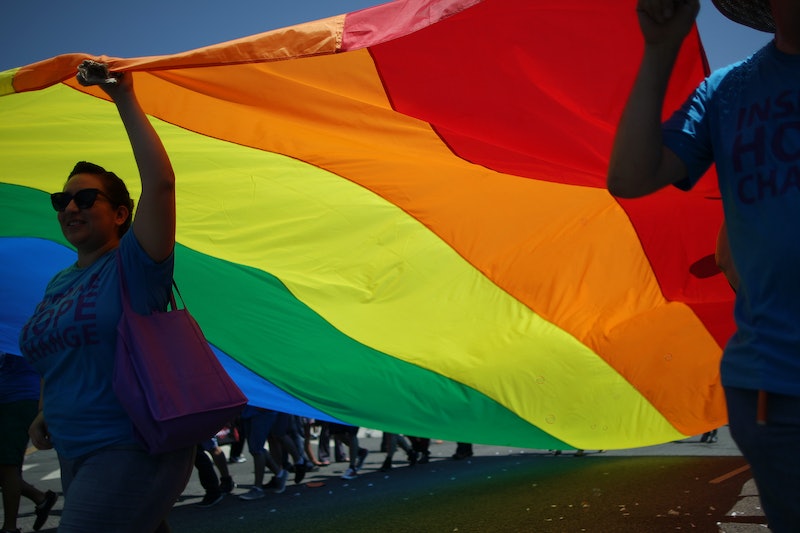 In an attempt to block an Oklahoma bill that would allow business owners to refuse service to same-sex couples and other minorities, state representative Rep. Emily Virgin has introduced a clever amendment that would force businesses to post signs announcing their discriminatory policies. Oklahoma’s state legislature is considering two separate bills in its House and Senate chambers that would effectively allow businesses to plead off serving same-sex couples, as long as they could show that doing so would violate their religious beliefs.

The controversial measures have surfaced as anxieties mount in conservative circles over the growing possibility that the Supreme Court will decide to legalize gay marriage across all 50 states this summer. Oklahoma state Sen. Joseph Silk (R) explained the impetus behind his version of the bill to The New York Times: “[Gay people] don’t have a right to be served in every single store," he said. "People need to have the ability to refuse service if its violates their religious convictions.”

But state Rep. Virgin (D) wasn’t going to let her colleagues pass the religious exemption bill without a fight. On Tuesday, the lawmaker from Cleveland, Oklahoma, introduced an amendment to House Bill 1371 that would allow businesses to discriminate on the basis of their religious beliefs, but only if they posted their policy visibly outside and on the website. On their signs, businesses would have to specify whom and would not be served in accordance with the owner’s religious beliefs.

Virgin’s amendment drew praise from gay rights advocates. Ryan Kiesel, director of the ACLU of Oklahoma, noted in a statement that the amendment “very pointedly exposes the absurdity of creating a new era of legalized segregation.” As introduced, the amendment reads:

Any person not wanting to participate in any of the activities set forth in subsection A of this section based on sexual orientation, gender identity or race of either party to the marriage shall post notice of such refusal in a manner clearly visible to the public in all places of business, including websites. The notice may refer to the person’s religious beliefs, but shall state specifically which couples the business does not serve by referring to a refusal based upon sexual orientation, gender identity or race.

Not only does the amendment increase the chances that the bill won’t garner enough support to pass the Oklahoma legislature, but Virgin’s proposed change is a pointed critique of the logic behind the measure in the first place. Virgin is essentially saying to religious conservatives that if they want to discriminate against same-sex couples and other minorities, they will have to do it in daylight where everyone can see.

Rather than making the discrimination a private shame that is inflicted only on a few, this amendment forces prejudice into the public sphere where we can all see it and decide how to act towards those who discriminate. Under this scheme, a heterosexual couple who would otherwise be unaware that their florist refused to arrange roses for their gay friends' ceremony can now decide to take their business elsewhere.

Sadly, Oklahoma is not a lone man out. Religious conservatives across the country are pushing legislative measures that ostensibly are meant to protect religious freedom but ultimately make it harder for the state to prevent businesses from discriminating on the basis of sexual orientation, race, or gender. According to the Human Rights Campaign, 22 states have introduced bills with a similar bent, to widespread protest from gay rights and civil rights advocates. In a position paper recently released, the Human Rights Campaign decried the stream of religious liberty bills for taking aim at the LGBTQ community:

These new laws moving forward in the states are motivated by something much darker than the constitutional principle of religious freedom and personal religious practice. In fact, they predominantly serve as a vehicle to empower and codify anti-LGBT discrimination.

Lawmakers in Oklahoma and elsewhere would do well to look at Arizona for an idea of the consequences they could face if they pass such sweeping anti-LGBTQ laws. Back in February, the Arizona legislature passed a similar bill that used vague language to allow business owners to refuse to serve LGBTQ customers. Ultimately, Republican Gov. Jan Brewer vetoed the measure after a tense showdown in which opponents and advocates rallied outside her office.

Among the critics of the measure were some unusual allies for the LGBTQ advocates. Business groups and conservative politicians on the national stage both came out against the bill as something that would tarnish the state’s image and deter economic investment. Even before the bill hit Brewer’s desk, the Hispanic National Bar Association decided to move its national convention away from the state, which would have brought 2,000 lawyers to stay, eat, and explore. And the NFL, after deciding to host the Super Bowl next year in Arizona, started to look into moving the sporting event to a new location. Thousands of people called in and wrote letters, threatening never to visit the state again.

Arizona’s experience does not bode well for evangelical business owners in Oklahoma if Virgin’s amendment passes with the bill. Both bills, however, remain far from the governor’s desk, and it remains to be seen if the public outcry against the measure will be enough to halt it in its tracks.

Economic concerns aside, the rise of this sort of legislation remains deeply troubling. These bills tend to argue that the state has to have a compelling interest to impose a burden upon our religious freedom. I am all for religious freedom and keeping the state out of questions about how we observe our faith, but since when did equal protection under the law and freedom from unfair discrimination become something other than a compelling interest? To borrow from a sign that protestors carried outside of Brewer’s office: “Civil rights before religious wrongs.”