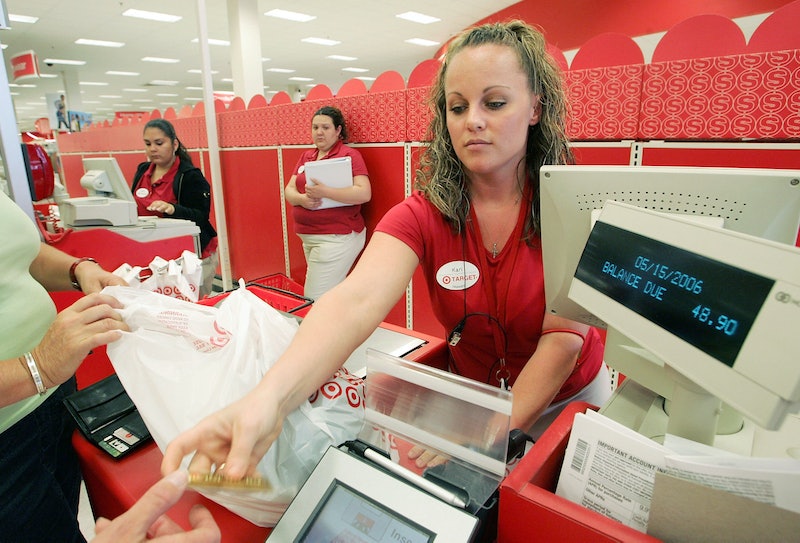 Another American mega-retailer has jumped on the workers pay wagon. Reuters reports that Target has raised its minimum wage to $9 an hour, a move that will affect all of its 1,800 U.S. stores, citing a source within the company. The pay increase will reportedly go into effect next month and help Target be competitive with rivals such as Walmart and T.J. Maxx.

Companies are vying to attract and retain low-wage workers as consumer confidence returns and unemployment drops. In February, America's largest private employer Walmart said it would raise its minimum worker wage to $9 an hour and $10 an hour next year. A week after Walmart's announcement, T.J. Maxx, Marshalls, and HomeGoods owner TJX said it also would raise its minimum wage to $9 an hour. Gap and Ikea made similar promises last year.

Target, which employs nearly 350,000 people in the United States, has historically said it pays more than the federal minimum wage of $7.25 but would not share specific worker rates. Spokeswoman Dustee Jenkins declined to tell The Wall Street Journal how many employees would see a pay bump. “Our goal is to always be competitive with the marketplace,” she said.

Women's advocacy group UltraViolet took Mulligan's comments to heart. BuzzFeed highlights the group's role in effecting changes in Target's pay policy. UltraViolet said it took on the low-pay workers cause because women make up two-thirds of the minimum wage workforce. Earlier this month, UltraViolet released a web ad campaign that included banners that said, "Did you know there's a Walmart near you that pays higher minimum wage than Target?" UltraViolet's online petition to raise Target's minimum wage garnered 25,000 signatures.

The group took to Twitter to applaud Target's decision to raise its pay floor but indicated that more needed to be done for all minimum wage workers.