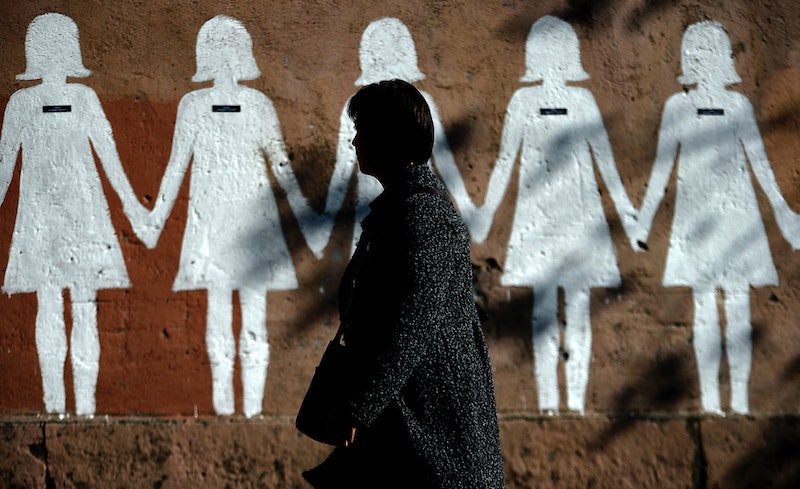 Have you heard the statistic that on average, women are paid only 77 percent of the salary earned by men? Well, new data released by U.S. Census has uncovered the industry most guilty of perpetuating the gender pay gap: The financial services industry. Women who work as securities and commodities brokers earn an average of only 54 percent of the salaries earned by men working in the same sector. Financial services are also male dominated, as female workers make up only 30 percent of those working the field, which could be one of the culprits of this sexism.

If you're a woman who is working on Wall Street, you might want to look into your salary, as a wide range of finance-related jobs are at the top of the list of the biggest gender pay gap offenders. Financial specialists who also happen to be women, for example, are only paid an average of 60 cents for every dollar earned by a man. The worst part of this, though, is that this area is actually balanced in terms of gender, as women make up half of all of those employed. Personal financial advisers also don't fair well, as women earn only 62 cents on a man's dollar.

The financial industries have been under surveillance when it comes to equal pay for a while now, and there have been many high-profile equal pay lawsuits that have involved Wall Street. The Equality and Human Rights Commission's report on sex discrimination in the financial industries says that some of the reasons for the huge pay gap in these industries are a lack of transparency about salaries, stereotyping, and a lack of executing policies that are meant to create equality. They also stress that the long working hours often required in financial services make it difficult for employees to balance work and family life, as well as the disproportionately large number of young people working in this industry.

Wall Street is not alone in its disparaging wage gap though; many other industries also do a very poor job of paying women the same that they do men. Here are five of the other worst offenders of the wage gap:

An industry you'd probably prefer not to think about seems to have a lot of wage disparity. On average, women in this profession earn only about 60 cents for every dollar earned by a man. Imagine what the dead would say?

Those women who plow fields for a living might want to look into their earnings, as they only earn 61 cents for every man's dollar. As to why there's such a high disparity in this industry, one paper cites the unique challenges of farming as probable causes behind the wage disparity — factors like seasonal unemployment, the cost of living in rural areas vs. urban ones, and the traditional practice of receiving in-kind payments.

The next culprit of the gender wage gap is the sales industry, with women's average earnings coming in at a measly 63 cents for every dollar earned by a man. Come to think of it, this is also related to financial services, so it's not really a big surprise.

Those who are responsible for managing money and breaking down the data for companies also face some gendered hardship: Women in these occupations earn an average of 63 cents on the man's dollar.

Even though this is often thought of as an industry dominated by women, those employed in this field are only earning 65 cents on the dollar of a man. This is probably because traditionally blue-collar industries that employ mostly women often don't pay well. In gender studies, this is attributed to femininity being devalued, while masculine occupations like law, computer science, and engineering typically pay more and are looked upon more favorably in society.

Check the interactive below to explore what the wage gap is like in a wide varieties of industries: