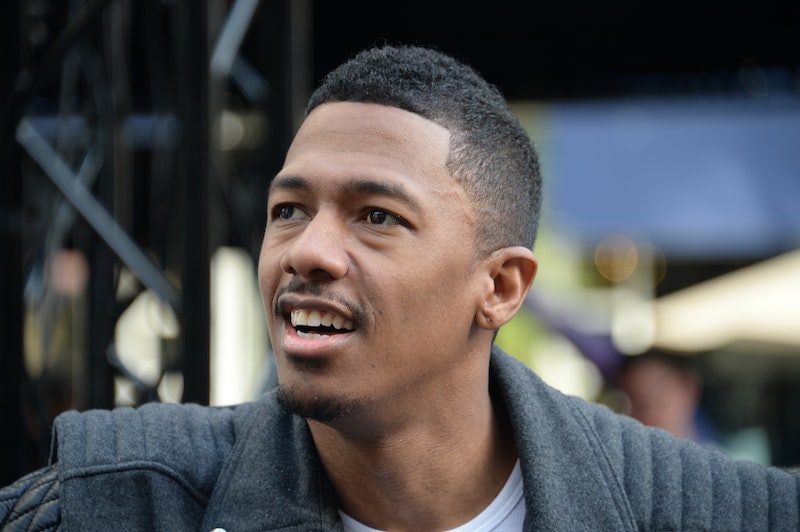 If you're still crying for Nick Cannon after his breakup with former wife Mariah Carey, it might be time to put the tissues away. Because it looks like he has! According to the New York Daily News and multiple other sources, reportedly, Nick Cannon is dating model Jessica White.

White and Cannon have reportedly been "purely just friends" for some time now, according to a source who spoke to E! News. Though they are now being romantically linked by media outlets, the source says the pair is keeping a low profile out of respect for Cannon's family, since his divorce to Carey has not been finalized yet.

While Cannon was going through the breakup, White was there for him as a friend, according to the insider. But now, it looks like they might be moving toward taking the next step, but this has yet to be confirmed by Cannon and White. Cannon also denied being in a relationship with anyone on March 17, despite being spotted out partying with White and others just the weekend before.

If it is indeed true that White and Cannon are becoming an item, the model is probably helping Cannon move on from heartbreak. And it looks like Cannon might be able to give her a hand as well, since she reportedly is interested in beginning a career in music.

As we all know, Carey and Cannon have had a pretty messy split. Cannon first announced his separation from the legendary pop diva in August 2014, following months of speculation that there was trouble in paradise. And since then it seems like there has been nothing but drama between the two. From the divorce talk reportedly getting in the way of Carey's performance at New York's Christmas tree lighting to Cannon allegedly flipping out after hearing his then-wife's songs at a charity bowling tournament, it has been nothing short of a public downward spiral. So, once the divorce is finalized, if White is able to help Cannon heal from the pain of this breakup, that would probably be a good thing for him.

And Cannon's supposed new lady friend could get a hand from the singer. The source who spoke to E! said, "Jessica been in the studio lately and Nick has been very supportive with her focusing on her music career and giving her some great pointers and direction as she explores her talents. They been spending lots of time together and Nick really enjoys Jessica's free spirit and easy going attitude for life." It sounds like if this is really a thing, it's headed in a positive and mutually supportive direction. If so, kudos to them!

More like this
Khloé Kardashian Is Reportedly Dating A Private Equity Investor She Met Through Kim
By Jordyn Tilchen
Vick Hope Had A Very Relatable Reason For Turning Calvin Harris Down
By Sophie McEvoy
Who Is Camila Cabello Dating? She's Getting Cozy With Lox Club CEO Austin Kevitch
By Radhika Menon
Nicola Walker’s IRL Husband Is No Stranger To TV Screens
By Darshita Goyal
Get Even More From Bustle — Sign Up For The Newsletter