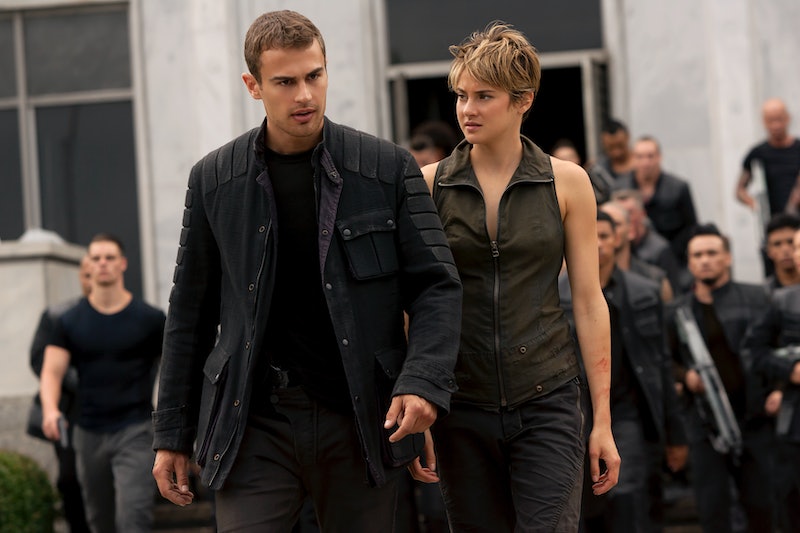 Insurgent hits theaters this Friday, and so far, reviews say the movie has everything fans of a dystopian, post-apocalyptic YA fiction series would ever want in a sequel: explosions, relationship drama, majorly epic CGI, and Shailene Woodley's new haircut. In Divergent, the previous installment of movie series, Woodley's character Tris wore a full ponytail of Ariana Grande-esque hair, but this time around, something is visibly different, hairdo-wise. Which, of course, begs the question: Did Shailene Woodley cut her hair for Insurgent ?

Short answer: Yes. The long answer is a bit, well, longer than that, but lengthy story short, Woodley did chop off her hair before filming the second installment in the Divergent series, and it was for a much bigger reason than Tris just wanting to rock a pixie cut — it goes deeper, character-wise, and the fact that Woodley so willingly chopped off her locks because of it is just another show of her total dedication to the role.

Here she is getting her hair cut for The Fault In Our Stars:

Here's why she's getting a pixie cut again in Insurgent.

E! News says that in the classic tradition of movie heroines and anyone going through a breakup, Woodley's new pixie cut is meant to show her character's transformation: "Her hair is cropped short as she pursues her quest of discovery and defiance. The look says she's ready to fight back and not let anything get in her way—much less let hair get in her face."

According to Newsday, Woodley had a crew of pixie cut stunt doubles to fill in during some of the action sequences, but an official sneak peek video reveals that she did perform some of her own stunts. Luckily for Woodley, Tris'"self-inflicted haircut" is styled to disheveled perfection, naturally.

Woodley agrees: "Life would be great if you could cut your own hair while looking in a broken mirror and have it turn out like that." Yes, Woodley — yes it would.