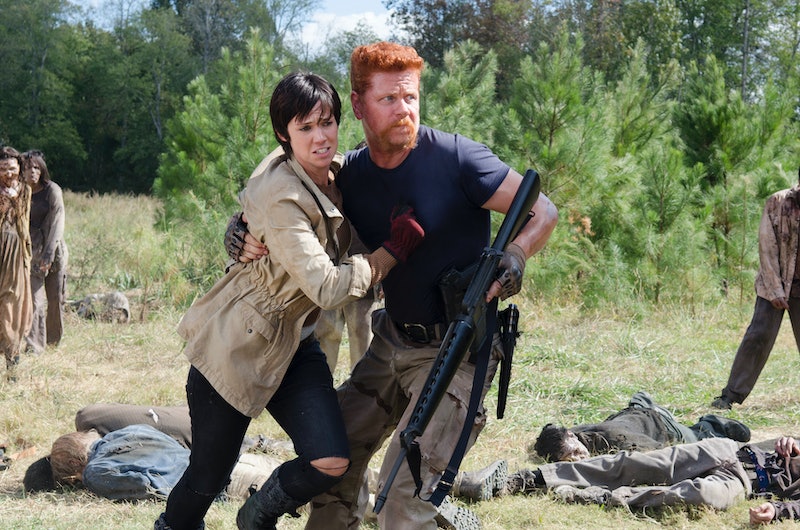 Besides the realization that the creators of The Walking Dead are trying to emotionally destroy us, there was a very important detail that happened on last week’s episode of The Walking Dead, which you may have missed through your sobs over Noah’s corpse. The scene where Abraham saves the woman from the walkers could be pivotal in his overall storyline if my theory is correct. To me, it seemed like the woman Abraham saved, Francine, may be Holly from the comics. Before you read any further, know that there are spoilers for The Walking Dead comics ahead.

First, who is Holly? In the comics, she is also a part of the Alexandria construction crew, and is definitely a part of Tobin’s group (just like Francine). Unfortunately, even her past in the comic books is pretty unknown, but the first time Holly is introduced is during an outing to get supplies for an expansion of the wall. The group is attacked by walkers (sounding familiar yet?) and everyone bails on her because she’s surrounded, but Abraham kills all the walkers and pretty much saves her life. Essentially the same situation in which we met Francine, which is why I am convinced that she is the TV version of Holly. While I'm not exactly sure why the show would change a character's name but keep the majority of their background, it could have been an attempt at throwing off comic readers, as Holly becomes very important to Abraham's story.

Because in the comics, Abraham cheats on Rosita with Holly. Yes, we might have a good old-fashioned love triangle brewing — the first one since Lori, Shane, and Rick.

We don't really know much about Rosita and Abraham's relationship beyond the fact that they are sleeping together and have been for awhile now. We know that in the Alexandria Safe-Zone they are living together, but we don't actually know if they are serious about each other.

Since it’s obviously impossible to keep an affair a secret in the apocalypse, especially in a tiny safe-zone surrounded by walls, in the comics Rosita learns about Abraham's relationship with Holly and moves out of their house. Holly then wants to move in with Abraham that same day, because she loves him and his perfectly manicured ginger beard. Spoiler alert: they move in together, even though he’s definitely not ready. He tries to tell Holly that, but she just gets angry.

However, Abraham really does fall in love with Holly in the comics, so if Francine is actually her counterpart, then we just met a very important character. But don't expect to get the answers we are looking for any time soon. With only two episodes left in the season, I have a feeling that we will be waiting until Season 6 to learn more about Francine.