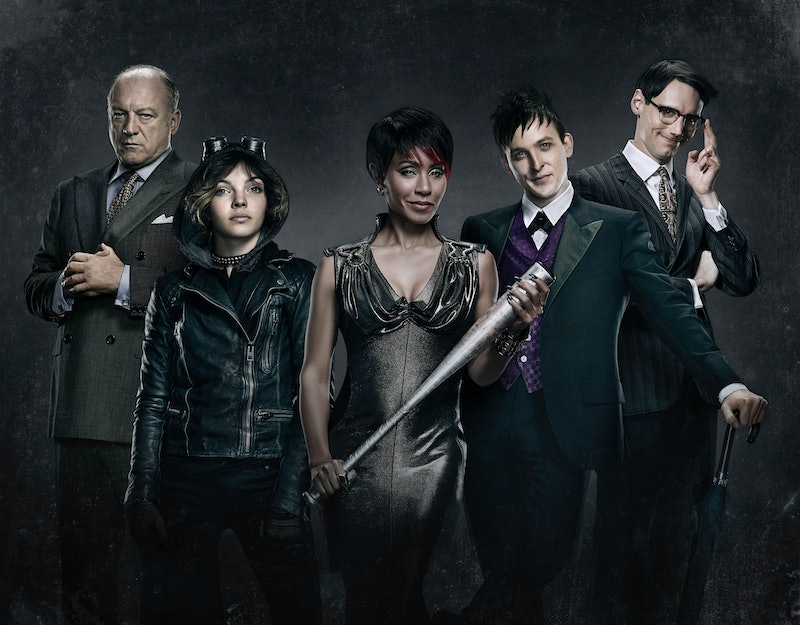 Jim Gordon and Bruce Wayne may be the moral high ground of this series, but everyone knows that Gotham 's villains are way more fun than its heroes. Why? Because despite how much we as an audience want to see good ultimately prevail over evil, there's also a small (albeit darker) part of us that can't help but fall for those big bad charms. After all, a hero is only as good as the villains they're up against, and when it comes to the crime lords of Gotham City, evil is never in short supply.

Yes, this freshman series has proven itself very worthy of producing cunning, formidable foes — some of which have the power to give us nightmares for weeks on end. I mean, Fish Mooney tore out her own eyeball with a SPOON. Do you realize just how badass that is? Because I really can't stress it enough. But the bottom line here is, these villains are smart and memorable, but more importantly, they're extremely likable. And whether you're willing to admit it to yourself or not, everyone has a favorite. But what exactly does your Gotham villain of choice say about you? Quite a lot, actually...

You are the ultimate organizer, to the point where even your backup plans have backup plans. (Monica from Friends was kinda your role model growing up.) You've always been able to weasel out of any sticky situation unscathed, even back when you were little and had your hand literally caught in the cookie jar. This is mostly because you just look so sweet and innocent. (If the world only knew!) You have a tendency to care too much about what other people think, making you constantly feel the need to prove yourself. Just remember to go easy on yourself. You're awesome just the way you are — quirks and all.

You are a go-getter and extremely career oriented. No metaphorical (or literal) mountain is too high for you to climb. However, your unstoppable ambition and tendency to look toward the future sometimes make you forget to live in the present. It's good to have goals, just don't let them become your entire life. You're incredibly resourceful and once you set your mind on something, it'll get accomplished no matter what. (You would totally win on The Apprentice, by the way.) Basically, this is your world and we're all just living in it.

Riddle me this… I provide a wealth of knowledge to those around me, but sometimes feel unappreciated. I come off as shy at first, but get to know me and I'll make you laugh forever. Who am I? (*Inserts name here*)

You crave power and loyalty above all else. Forgiveness does not come easy to you, so if someone gets on your bad side, they tend to stay there forever. You are thought of as the ring leader of your friend group and more than likely quote The Godfather on a daily basis.

You thrive in a work environment that involves you doing things behind the scenes. It's not that you don't have what it takes to be in the front and center of things, you just really hate all the attention. You're extremely hard working and loyal to a fault. Just don't forget to put yourself first every once in a while.

You have a deep-rooted fear of commitment and hate the thought of being tied down in any way. You have a tendency not to trust people with your own secrets, but somehow manage to find out everyone else's. You were a track star in high school thanks to your top-notch agility and athleticism. You love to sneak up on people and scare them, because, you know, it's just plain fun. Also, you own a cat. Obvs.

You're not much of a talker and a bit of a compulsive liar. In fact, you're probably even lying about Ivy being your favorite.

If Victor is your favorite villain, please seek help immediately because he is downright terrifying. (*shivers*)

You have this unrelenting urge to be liked by everyone you meet. You try to avoid confrontation at all costs, which sometimes makes you falsify how you truly feel about certain matters. And because of that, some view you as a little two-faced.

You enjoy a good thrill, but are just as happy when it's over. You tend to live in the moment and play things by ear, so planning isn't exactly your strong suit. You love being spontaneous and are an accomplished multi-tasker, mostly because you simply hate thinking about just one thing at a time. You're also constantly on the go and hope to travel the world someday.