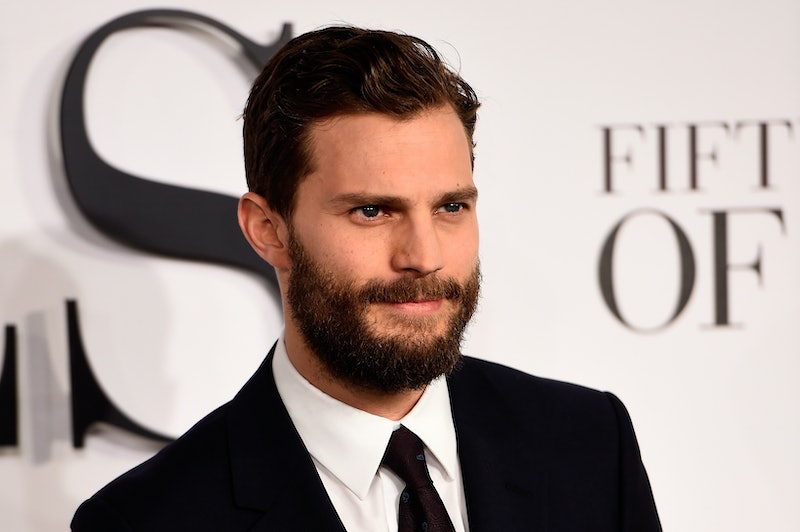 Someone should ask the man forever to be known as Christian Grey, if he's okay, because it does not seem like he is doing so great. In a new interview with The Guardian, Jamie Dornan said he's worried that people will think he's a psychopath because he plays one in the movies: "I consider myself quite light-hearted, pretty easy-going, and I keep playing sick psychopath bastards! ... It kinda worries me sometimes how comfortable I am in that zone."

I mean...you're an actor, Dorny! Isn't that the point, to be comfortable and lose yourself in the roles you play? I guess it isn't surprising that the Fifty Shades of Grey star thinks that people will confuse him with his characters, though, cause he's shown his paranoid side in the past. In other words, Jamie Dornan has no chill.

He went on to tell The Guardian,"There are times when I'll be like: ‘Huh, someone made a Fifty Shades movie, that's funny.'And then I'll be like: 'Wait, I'm the guy?!'" Well...yes, you are indeed the guy, Jamie. Maybe you should be less worried about people mixing you up with Christian Grey and more about the fact that you had an out-of-body experience when filming the movie.

The other red flag interview came in January when Dornan revealed he was afraid of... murder! He told Details: "I fear I’ll get murdered, like John Lennon, by one of those mad fans at the premiere." That's...an interesting concern to have, my friend. He said that the fear came from the fact that a lot of people were angry he was chosen for the part of the guy who has Very Singular Tastes. But just because you're #NotTheirChristian doesn't mean that someone is going to kill you out of rage, Jamie Dornan. I would certainly hope that Fifty Shades doesn't incite that kind of crime of passion.

Who knows why Dornan is so disturbed about his fame or his characters. I'm sure it's a worry many actors have when playing parts that are dark and intense. But does the public think that Daniel Day-Lewis is a ruthless oil tycoon or the last of the Mohicans? Do people avoid Christian Bale because he might axe them while wearing suspenders? That's the magic of the movies, baby! You can be whoever you want. And give the public a little credit to make the distinction between you and a zillionaire with some sex secrets. But if it really disturbs him that much, maybe Dornan should play a nice guy in a romantic comedy — for his own mental health.