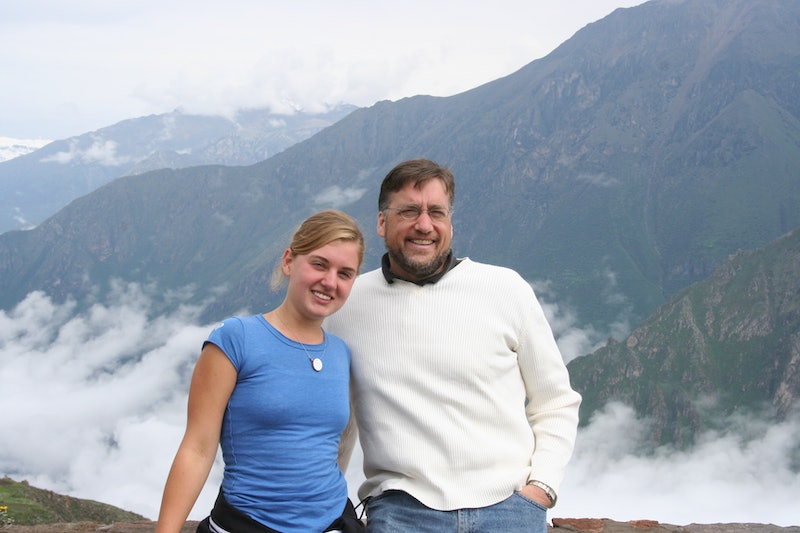 I always knew I'd enter a stage in my life when many of my friends and I would lose our parents, but I never imagined it would start in my mid-twenties. When I lost my dad 14 months ago, I learned that we are rarely as vulnerable as when we lose someone unexpectedly. Each misguided comment I heard from someone trying to console me simultaneously felt like the least sensitive thing someone could possibly say — and also incredibly trivial. But what should you say to someone who's lost a family member? The answer isn't always clear, but I can certainly contest that there are some things you definitely shouldn't say to a grieving person.

After being on the receiving end of several of these more ignorant comments, I began to realize that most of these phrases are said simply because people are afraid of saying "the wrong thing." For me, the only wrong comments were those that were misguided, rehearsed, and said without thought. Those are the comments which tend to be repeated over and over for every death.

While I appreciate the thought and understand the need people feel to say something, I would much rather hear the "wrong thing" said sincerely than the totally insensitive or misguided “right thing.” I understand how awkward and helpless people feel in the face of grief. I understand that no matter how many funerals you've been to, it doesn't become easier to know what to say. I don't think anyone intentionally says hurtful things; instead, I think the desire to say anything and to help makes us go back to those phrases that are repeated so frequently they lack meaning.

So with that in mind, here are nine of the worst comments I heard in the days and weeks following my dad’s death — comments that might be considered the “right thing,” but which felt rehearsed, staged, and insincere.

9 Things Not To Say To Someone Who's Grieving

Every time I heard this, in my mind, I screamed, “You have a crappy belief system if you think my dad dying from the flu at 50 happened for a reason!”

2. “Everything Will Be Okay”

Amidst confusion and chaos, it's normal to want order and to make sense of things, but in an unexpected, sudden death there is no sense. If everything were okay, I would be able to text my dad right now.

My dad used to say everything won’t be okay. I’m gonna stick with that instead.

Really? I’ve been crying for four days, haven’t slept more than two hours in a row, and haven’t eaten. I assume I’ve showered at some point, but I know I do not look great. And guess what? It doesn’t matter. Because my dad is dead.

I asked my brother about this — and he told me that nobody said any of these things to him. It seems that even in grief, some people only know to comment on a woman’s appearance.

4. “You Should Figure Out Some Coping Mechanisms”

This comment came from someone I didn't know very well, and seemed to show a lack of understanding of what I was going through. Of course I needed to figure out how to cope, what else did he think I'd been doing?

My world had been shaken up. Normal coping mechanisms aren’t effective in this new, surreal world. I, and I assume many others, didn't have finely honed coping mechanisms prepared for dealing with the death of a parent. I still don't. I don’t know if I ever will — and I’ve learned to be okay with that.

5. “How Is The Coping Process Going?”

Stop. Now. Unless you are one of my brothers, your dead dad/mom/grandma isn’t my dead dad.

Every death is different. I've lost three grandparents and my feelings about each one of those deaths was different. The circumstances leading up to their deaths were all very different. Each death is tragic and unique, and one person will likely mourn differently for different people.

This is a world away from saying “I can’t imagine how hard this is for you,” which is a good thing to hear. The precursor "I can't imagine" shows that the speaker understands the uniqueness of the situation, recognizes the emotion, and acknowledges that it's somehow different than what they are experiencing.

But "this is hard" may be the most condescending thing I’ve been told in the last 14 months. When I've heard this, I want to ask if the speaker thinks I've forgotten. Am I too cheerful? Am I not acting the way you think I should be? I am well aware of how hard this is. Sometimes, I’m still scared to get out of bed because I’m not sure there’s solid ground to stand on.

8. Any Euphemism For Death

To me, my dad didn’t pass away. That's too peaceful.

I know you're trying to be useful, but this puts the pressure on the grieving person. The most helpful thing you can do is just be there. Don’t ask what you can do. Don’t ask if everything is okay (it’s not). Be there.

If you can’t physically be there, you can call, text, email, send letters, tweet, do whatever you can. My best friend slept beside me and didn’t leave my side for days. My roommate gave me a hug every night for months. A friend called me every day for weeks and weeks. Some days I just cried and couldn’t say anything, but she kept calling.

3 Things You Can Say Instead

Of course, I have also had an unbelievable amount of really great support and heard some really good things. Here are three things I remember people said that seemed so real, sincere, and honest that they genuinely reflected my own pain and grief.

Is there really anything more accurate or true that can be said?

2. “Your dad was such an asshole sometimes.”

While this may seem like the worst thing to say, it came from someone who had known my dad for nearly 40 years. She had just shared a funny story from years before and I had shared a more recent one and the message was the same: sometimes he was hard to deal with, but neither of us were quite ready to imagine life without him. It was a way of remembering him honestly.

The sentiment behind this comment is that there is absolutely no reason this happened. Period.

Those sincere moments, the times when people went out of their way to be with me, the times when “the right thing” wasn’t said, were what got me through 2014. It’s certainly not over. I still have to remind myself every morning that my dad is dead, but I’m alive.

More like this
The 19 Best Tweets & Memes About Bisexual Awareness Week
By Lexi Inks
The Spiritual Meaning Of Angel Number 000, Explained
By Kristine Fellizar
24 Years Ago, 'Friends' Dropped Its Most Underrated Ross & Rachel Episode
By Grace Wehniainen
10 Ways To Be More Empathetic To Your Partner
By Raven Ishak and Lexi Inks
Get Even More From Bustle — Sign Up For The Newsletter