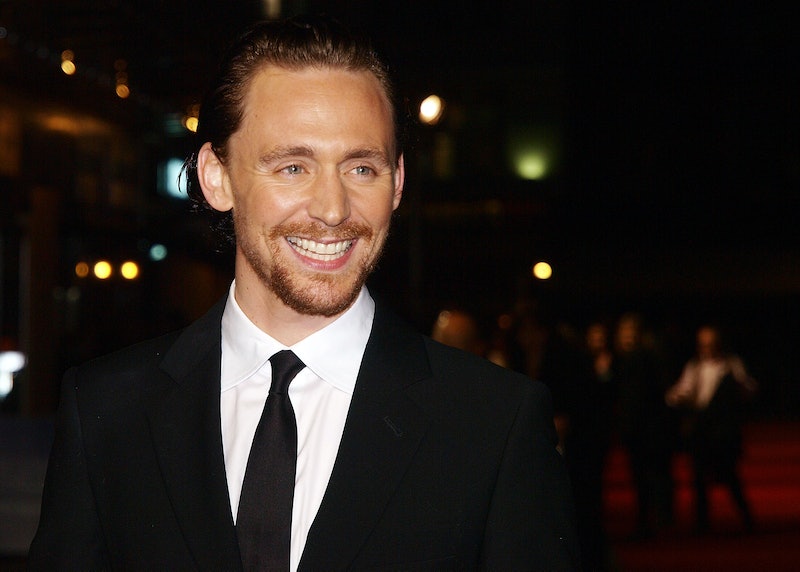 In case you didn't know, Tom Hiddleston played this really dark villain character called Loki in a few little Marvel films like Thor and The Avengers. Chances are, though, that you probably did know that, because Tom Hiddleston likes to talk about Loki, like, a lot. Case-in-point: There were enough instances to prompt an actual list of the cutest things Tom Hiddleston has said about Loki.

I can't say I blame him; if I were Hiddleston and I had female fans swooning over my badass supervillain role, I would talk him up, too. There's nothing better than a truly superb villain, one so well-played that you can't help but admire their villainous ways and the lengths the actor goes to in order to bring depth to the role. Kenneth Branagh, director of Thor (and well-versed in playing the villain himself), spoke about Hiddleston's Loki, explaining what makes the character so captivating. Branagh said of Hiddleston's Loki:

The survival instinct makes them very inventive. It means they're always surprising you. So when you have that dark, damaged quality and literally a box of tricks to play with that kind of character is going to be around for a long time.

Branagh's words couldn't be more true. Loki has been a fan favorite since he first debuted in Thor, and Hiddleston loves to ham it up as Loki of Asgard, even when it's not totally necessary. Hiddleston clearly has a soft spot for Loki and is able to look through all the bad in Loki and see his inner goodness. Loki is clearly a character that Hiddleston truly cares about, and in honor of Hiddleston's quest to make us love the bad guy, here are the six cutest things Hiddleston ever said about his god of mischief.

Hiddleston on His Third Meeting with Loki for Thor: The Dark World

Hiddleston talks about his third time playing the god of mischief. His engagement with the character and the depth of his feeling for Loki is truly adorable. He is almost poetic in his description of his relationship with Loki:

As an actor, you kind of develop a relationship with the character that exists for as long as you play it and then you take off the costume and you walk away and that's it. And the amazing thing about Loki is that this is my third meeting with him... and my understanding of the character deepens every time... My third engagement with playing him is a chance as an actor to find new depth, new dimensions, new iterations of his psychology, of his physicality, of his capacity for feeling. And, god bless him, he's a complicated cat. He's, on one level, this off-the-rails, psychopathic agent of chaos who exists in the mythology as a kind of wrecking ball. But on the human level, his psychology and emotional landscape is very, very interesting because he is so intelligent and yet so broken.

In this interview promoting The Avengers, Hiddleston has a few good laughs with his Avengers costar, but he also gets down to the core of Loki and offers up these words of inspiration about playing in a superhero film.

"These kinds of films are why I became an actor.... It's an amazing feeling.... In every grown human being, there's a kid...and it [The Avengers] appeals to the kid in all of us."

Tom Hiddleston on Empathizing with Loki

Hiddleston responds in this interview to a question about what it's like to play a villain and feel the urge to "like" the character you are feeling. His eloquent response about loving Loki, flaws and all, is as follows:

I think any actor playing any character has to extend... you have to extend your compassions for their predicament... The moment the actor stands outside the character and sits in judgment upon him is the moment, really, you cease to be able to play him truthfully... All of the bad guys in the course of human history have all, in their own mind, thought [and] imagined that they were doing the right thing in some strange way, even if, from the outside, it looks tragically deluded.

Loki and Thor: Yin and Yang

In this interview, Chris Hemsworth and Hiddleston react to a fan's suggestion that Loki is more popular than Thor. A bold statement, but Hiddleston does the question justice by talking about Loki and Thor's relationship in opposition to one another. He says, "I think Loki is defined by Thor, is defined in opposition to him. They are yin and yang, the sun and the moon...." Thor and Loki, the most beautiful yin and yang there ever were.

Up All Night To Get...Loki'd

Okay, okay — so he's not really talking about Loki here. But, he is singing about him, and how adorable is it?