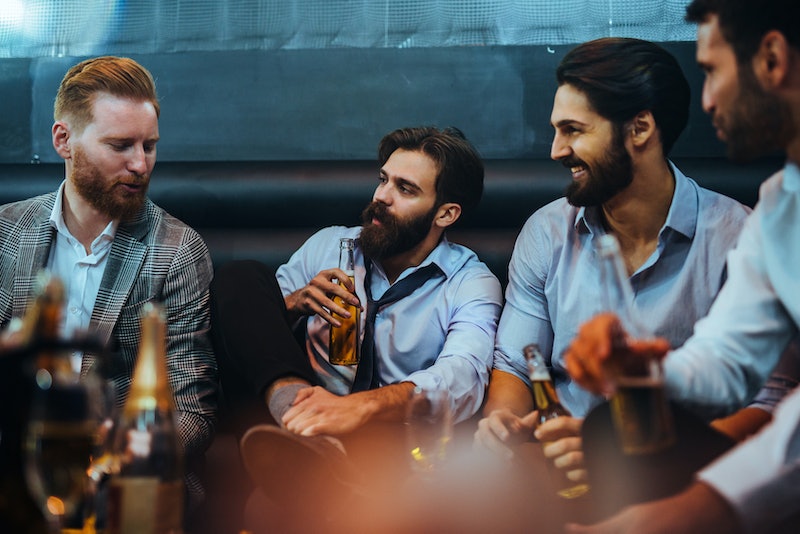 It's a pretty common trope that guys stand around the locker room, divulging their sexual exploits, and you don't want to sleep with a jerk because he'll go around telling all his friends, right? I feel like that's something I was fed as I was growing up — but is it actually true? Reddit set out to find the answer and asked men how much they really tell their friends about their sex lives. I'm going to spoil things a bit here and make your world come crashing down on you a little bit because, basically, men don't talk about sex as much as we think.

So even though we pretty much know the answer to the question — although 2002 was sadly a long time ago, so things could have changed, maybe — it's still interesting to hear what real people have to say.

Basically, guys really don't share that stuff with their bros...

Because it can make for awkward times.

Unless you have hooked up with the same girl, then all bets are off.

In fact, their conversations about sex are usually pretty brief.

For the most part, they just care if it happened/was good.

The idea that guys are always bragging about their sexploits is basically a myth...

And there's an important distinction between the way guys talk about girls they want to hook up with versus the ones they've actually hooked up with.

In general, girls are waaaaaay more graphic than guys (this response is NSFW).

Which could be caused by this interesting evolutionary theory:

While I'm not totally convinced by this evolutionary theory (is being good in bed a sign of having good genes? Hard to say, I'm not a scientist. But I guess it could be?), it's comforting to know that guys have our backs more than we think. Also, I'll admit it, I'm pretty embarrassed thinking about how many gory details I've told my friends, now that I know the guy on the other end probably was not doing the same thing.

Let this be yet another lesson in "what happens when you assume."