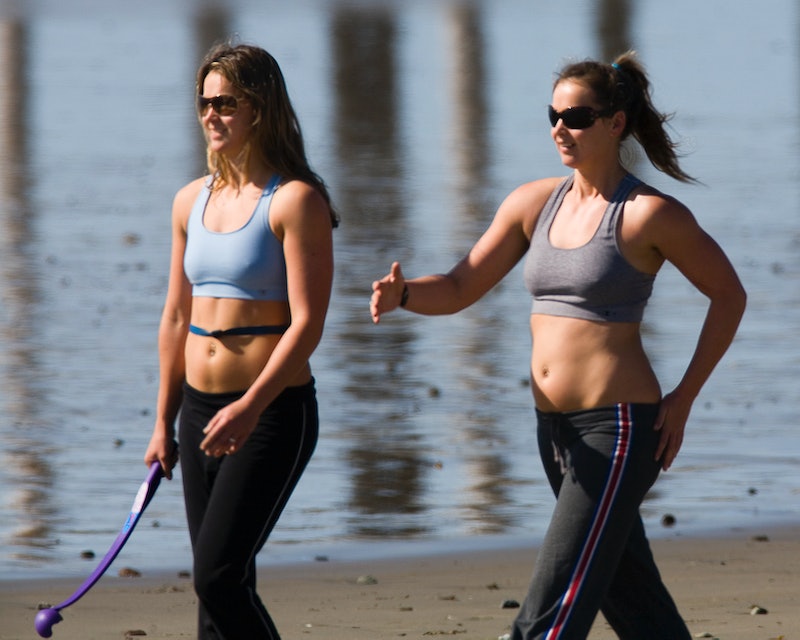 Maybe you've never heard of the term "fat talk," but if you're a woman, chances are, you've participated in it. Actually, chances are you've participated in it today. Fat talk, as eating disorder specialists term the phenomenon, is pretty much any kind of body-degrading talk you might engage in. You know the drill: Your friend says "Ugh, I look so fat in this dress," to which you answer, "No you don't! Just look at my thighs, it could be so. Much. Worse." Fat talk can be a way of venting and bonding, but ultimately, it doesn't tend to make anyone involved feel better. It also perpetuates the idea that women are supposed to hate their own bodies, and that female friendships must be bound and reinforced by that mutual self-loathing.

Which is why we need to talk about fat talk.

As a staff comprised mostly of women, we here at Bustle have encountered our fair share of fat talk. I sat down over cookies with fellow editors Julie Alvin, Margaret Wheeler Johnson, Hayley Saltzman, and Meredith Turits for this first-ever Bustle roundtable discussion:

Rachel: What do you guys think of when you think of fat talk?

Julie: There’s this Amy Schumer comedy sketch where she runs into a friend and is like ‘Oh you look great !’ and the friend is like ‘Oh my god are you kidding? I look like a prostitute who fell down a drain!’

So my assumption is fat talk is similar; it’s the way women often denigrate their own bodies in front of their friends.

Margaret: Fat talk's never been acceptable in any professional milieu I’ve been in, but the downside to that is that everyone is thinking it about themselves on the inside. It’s just not permissible to say.

Julie: And then you don’t have the reassurance of people saying ‘You’re insane! you don’t look fat!’

Margaret: But the thing about the responses is that it’s never reassuring, really.

Julie: True, because you would say I look great whether I look terrible in this outfit or not.

Rachel: An eating disorder specialist I talked to for background before this roundtable had a suggestion: she said, when you’re friend asks ‘Do I look fat in these jeans?’ that your response should be ‘What’s really going on? What are you really feeling nervous about?’ She said it's never really about being fat.

Julie: I don’t agree with that at all — sometimes I just feel fat! I don’t think it’s healthy to hold things in, but that doesn’t mean that once it’s out in the world it’s going to be dealt with in a way that’s constructive. I think there are probably constructive ways to have these conversations.

But one of my best friends struggles a lot with her weight, and it’s hard for me to have conversations with her about it. She exercises five days a week, she does boot camp, Soulcycle, all this really intense stuff. But her standing weight is 30 pounds heavier than I am. But she’s still someone I struggle talking about this stuff with, because I, like everyone else, occasionally feel fat.

Margaret: I just refuse to comment on anyone’s weight gain or loss whatsoever. Some of my friends may get offended if they've dropped a few pounds and want acknowledgment, but the value is not there. I'll say I love what they’re wearing.

Hayley: What about, "You look great?"

Margaret: It depends. If I know someone’s lost weight recently, I won’t say it.

Julie: Because you don’t want to play into the idea that that’s why they look great?

Margaret: I just think congratulating someone on losing weight is a bad idea. We live in such a weight-obsessed culture already.

Rachel: Who do you guys think we learn fat talk from?

Meredith: I got negative reinforcement about my looks growing up. I was overweight as a kid. My dad would say, "If you lost a little weight, you’d run faster." I remember my mom — this one time we were in a dressing room — she said "You know Meredith, pants just don’t look good on you."

Rachel: And you still don’t think you look good in jeans!

Meredith: To this day, I wear dresses.

Hayley: A lot of my friends in high school who ended up having eating disorders had moms that were constantly dieting. I remember when I was 14, my mom sat me and my sister down and said, "I know you hear your friends’ moms talking. Women always talk about weight. You guys are perfect the way you are, but we have the same body type. Whatever insecurities you feel, I probably feel too. So if you ever want to talk about it, I’m here."

She was always upfront about how older women impact younger women, and then it’s generations of the same problems, over and over. We joke with our mom sometimes saying, "Thanks for the thighs!" and maybe that’s not healthy either, but it’s our way of dealing with it.

Rachel: So maybe fat talk can be beneficial?

Hayley: It differs so much from person to person, and that’s why it’s really problematic when you have a group of friends fat talking. You never know how someone is internalizing it. My college friends, they think about weight and talk about it a lot. But it plays out not as "I look fat today" but in this dieting/exercise way —

Rachel: Talking about being “healthy”?

Rachel: I’m interested in the idea of “getting healthy.” Is it just code for getting thin?

Meredith: I’ll never be able to disassociate going to the gym from needing to lose weight. Ever.

Margaret: My mother has been a serial dieter my whole life. I’ve noticed that in the last few years, "being healthy" worked its way into her lexicon, but often it's just a term for diet-y behavior. I think people say "getting healthy" now because it's become taboo to say, "I’m trying to be as skinny as humanly possible."

Rachel: I’ve had coworkers who only drank juice, and you just didn’t talk about it.

Margaret: It's even worse when they brag about it! And there are competitions! There is nothing wrong with consuming solid food.

Julie: A friend of mine that once worked at Travel & Leisure, said they had a scale next to the vending machine.

Hayley: I just pulled up a picture that an editor at one of the most popular mainstream women's fitness magazines Instagrammed a few minutes ago. She wrote, "Ain't no lunchbreak like a [X] magazine lunchbreak! coworkers and I are about to spin it up hardcore." They’re all cycling during their lunch break.

Margaret: So when do they actually have lunch?

Rachel: So do you guys think fat talk has no place in the office?

Meredith: It creates a precarious psychological environment. What happens if someone says, I feel really fat today, and then two hours later, you watch her go to the snack cabinet and pull out a bag of chips?

Rachel: Meredith, we have a friendship where fat talk, or just talking about body image, is very acceptable. I remember telling you how I’m a snacker and eat more frequently than a lot of people here and wondered if everyone was judging me. In our office, the kitchen is at the center of where everyone works.

But I’m wondering: if you come in and say to me "I’m just feeling really fat today," how do you think I should respond?

Meredith: [pause] I have no idea.

Margaret: I think that gets to it. There is no reassuring response, no right answer. The right answer is Poof! You no longer feel fat. And no one can give you that.