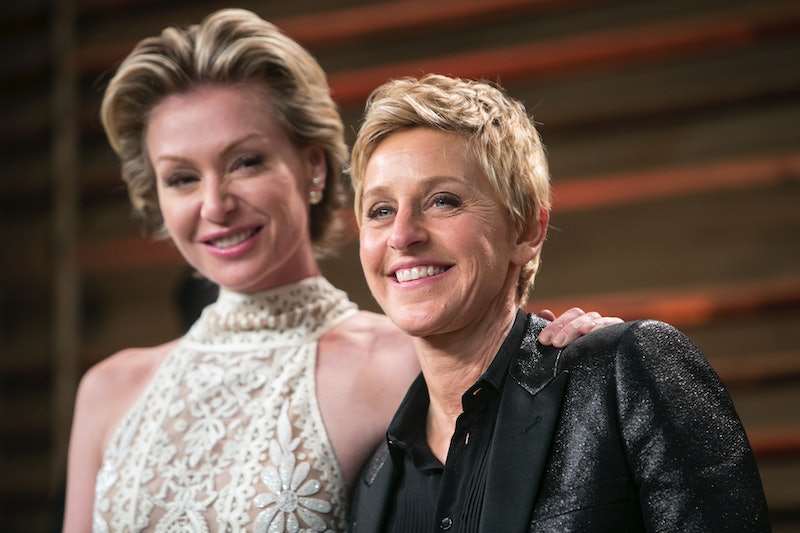 Dolce and Gabbana might be losing celebrity support. Last Saturday night at the 2015 GLAAD Media Awards, Ellen DeGeneres and wife Portia de Rossi spoke out against Italian designers Domenico Dolce and Stefano Gabbana's reported opposition to in-vitro fertilization as an option for queer couples looking to start a family. DeGeneres told E! News,"It's not even worth commenting on because they're, you know, ignorant," adding that she's done wearing Dolce and Gabbana. De Rossi weighed in, "The only thing you can say is that, you know, we're all entitled to free speech. However, I just don't understand who they are. I don't understand why they would want to say that."

Zoe Saldana, however, who was also in attendance at the GLAAD Awards, reportedly told E!the outrage over Dolce and Gabbana's comments wouldn't stop her from supporting the brand, and she definitely won't be joining other celebrities like Elton John and Madonna's protest of the anti-family comments. "That would be the stupidest thing if it affected my fashion choice[...]I'm certainly not going to stop wearing Dolce." Saldana also attributed the anger over the IVF comments to a language barrier and "misuse" of words: "My husband is from Italy, and if I judged him based on the words that he misuses in our English language he wouldn't be here today,"

According to the New York Times, Dolce reportedly told Italian magazine Panorama, “You are born to a mother and a father, or at least that’s how it should be. I call children of chemistry, synthetic children. Rented uterus, semen chosen from a catalog.” As NYT points out, the comments were "something of a surprise" considering that "well before same-sex marriage became widely recognized around the world" Dolce and Gabbana "were openly living together as lovers."

Openly gay celebrities like John quickly took to social media to protest Dolce and Gabbana's remarks and called for a boycott of the fashion label. “How dare you refer to my beautiful children as 'synthetic,'" John reportedly wrote on Instagram, "And shame on you for wagging your judgmental little fingers at IVF — a miracle that has allowed legions of loving people, both straight and gay, to fulfill their dream of having children. Your archaic thinking is out of step with the times, just like your fashions. I shall never wear Dolce and Gabbana ever again."