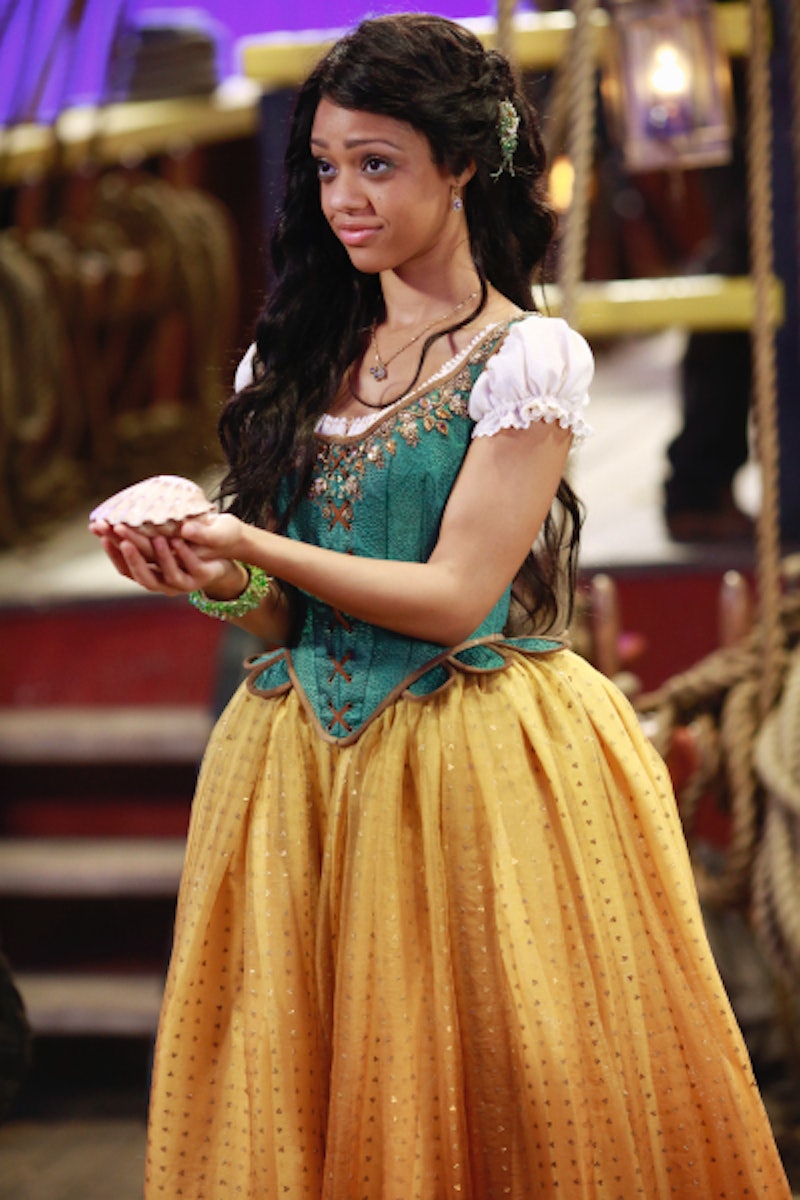 In my opinion, there can never be too many mermaids. Good thing Once Upon A Time feels the same way. Sunday's episode of OUAT was all about Ursula the sea witch, who it turns out, used to be a mermaid. Not only that, but she used to be a mermaid with a very familiar voice, a familiar backstory, and familiar daddy issues. On top of that, the episode also saw the return of Ariel! Hey, the more mermaids, the better.

Ursula and Hook met once upon a time, when Ursula was going through that "rebellious mermaid phase" and didn't want to do anything her father told her to. Ursula's dad, Poseidon, was very protective of her, since he had lost his wife when she was killed by a pirate some time ago. All that remained of her were the memories, and Ursula's voice, which I guess sounded just like mom's. Ursula's singing was the best memory they had of her.

But then, like all feisty mermaids, Ursula has to go and find herself some enchanted legs to walk on land and meet fishermen. This is not Papa Poseidon-approved behavior. He wants her back under the sea, and enlists our friend Killian to steal Ursula's voice so she'll return to the sea, for good, and never try to venture on land again.

Poseidon's plan works. Ursula loses her voice, and she's pissed. But dad's happy that his daughter won't go looking for trouble on land anymore, because life under the sea is better than what they've got up there.

In the biggest Little Mermaid shoutout of the episode, Ursula's singing is that familiar "ahhh, ahhh, ahhhhhhh" that Ariel sings in the cartoon version, and we all sing into our mirrors at least once a week.

The real little mermaid also turns up, in a very welcomed surprise. See, Ursula's happy ending is getting her voice back, and Hook's got her voice stashed away on the Jolly Roger. In order for Hook to get her voice, which is trapped in a seashell, Ursula has to bring the Jolly Roger to Storybrooke. In doing that, she accidentally brings Ariel along, too.

In the end, it's one big happy mermaid reunion, as Ursula gets her beautiful mermaid voice back and Poseidon himself is the one who gives it to her, since he's the one who technically took it from her in the first place. This villain now has her happy ending, and she's looking to get the hell out of Storybrooke with her dad. The two leave together, for ocean depths unknown, and now we're one villain happy ending down, four to go.

More like this
“The Door Is Always Open” For Another 'Breaking Bad' Spin-Off, Says AMC Boss
By El Hunt
Emma Thompson, Lashana Lynch, & Stephen Graham Lead Netflix’s 'Matilda'
By Sophie McEvoy
The 'Spiderhead' Movie Ending Is Nothing Like The Short Story It’s Based On
By Morgan Leigh Davies
The 'Hocus Pocus' Sequel Finally Has A Release Date & It Makes Total Sense
By Shannon Barbour and Radhika Menon
Get Even More From Bustle — Sign Up For The Newsletter