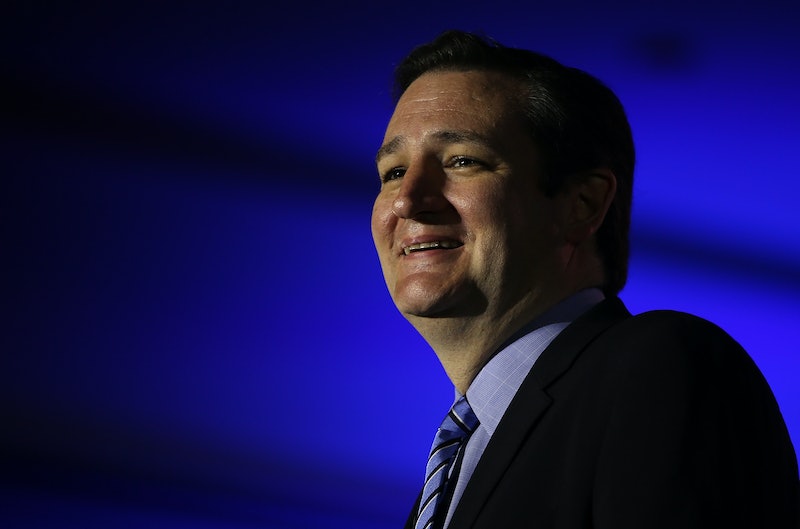 Monday, March 23 is the day: Sen. Ted Cruz informally announced via Twitter that he's seeking the Republican nomination in the 2016 presidential election. And no one was surprised — it's not like Cruz hasn't been making the campaigning rounds in the caucus hotspot of New Hampshire, scaring small children and bashing Obamacare. But now that we have to face the reality of a Cruz GOP primary campaign, it's time to look at just who the junior Texas senator is appealing to.

Politically (and spiritually), Cruz is a bit all over America's conservative map. He's a Cuban Southern Baptist private-school grad with a personal family history against Communism. In his Twitter and video messages released just after midnight on Monday, the presidential hopeful said he's aiming to reinvigorate a new generation of "courageous conservatives," an obvious appeal to 20- and 30-somethings frustrated by President Obama's recession-marred presidency:

I believe in America and her people and I believe we can stand up and restore our promise. It’s going to take a new generation of courageous conservatives to make America great again, and I’m ready to stand with you... to lead the fight.

In previous statements made at the 2015 Conservative Political Action Conference, Cruz also alluded to uniting Americans under a similar "courageous conservative" banner. "The way we get to 51 percent is we bring together conservatives and libertarians and evangelicals, and women and young people and Hispanics and Reagan Democrats," Cruz said at the time.

Uniting conservatives and liberals and Hispanics and Reagan Democrats? That's a bit of a lofty goal, isn't it?

Here's a look at who Cruz is trying to win over, and if it truly speaks to a new generation of conservatives...

Cruz's surest bet is evangelical Christians, who are at the helm of the social conservative movement in America. Cruz himself is an evangelical, as he is a member of the Southern Baptist church. His decision to make his formal campaign announcement at Liberty University, a notoriously strict Southern Baptist college, also emphasizes Cruz's determination to claim the far-right Christian base.

The Texas senator's passionate evangelical beliefs are definitely reflected in his voting base: anti-abortion, anti-gay, anti-contraception, pro-gun rights (which somehow became a conservative Christian ideal in America, despite Jesus' non-violence teachings). But is this complete and unflinching social conservatism truly what the majority of Americans want? For example, some Americans who don't support abortion under every circumstance might be troubled by Cruz's anti-abortion stance in cases of rape and sexual assault.

On the plus side, 26 percent of the adult American population identify as evangelical Christians. Cruz's built-in voter base is already pretty solid.

As Bustle's Celia Darrough pointed out Sunday night, Cruz's use of Twitter to announce his presidential campaign works as instant outreach to millennial voters — especially those college kids preparing to vote in their first presidential election. But will Cruz's social media savvy pay off?

At just 44 years old, Cruz is young for a presidential candidate, and may try to leverage his youth like Obama did in 2008. Unfortunately, "courageous conservatives" is not a hip enough slogan. (Sorry, Ted, but you have to admit "hope and change" worked pretty well. Maybe commission Shepard Fairey to do some Austin street graffiti for you?)

However, there's one group of young voters Cruz could definitely win if Sen. Rand Paul doesn't get in the way: white men between the ages of 18 and 29. Although he's running as a Republican, Cruz has a supremely libertarian-minded platform, which includes abolishing the Department of Education and IRS, repealing the Affordable Care Act, and returning the definition of "marriage" to the states. And fortunately for Cruz, the people most likely to identify as libertarian are either in college or under the age of 30.

If not Rand, then who? In this case, Ted Cruz.

Whether or not Sen. Marco Rubio tries to jump into the race, Cruz will be campaigning hard for the Hispanic vote. But his popularity among Hispanics is certainly not as great as Rubio's, the latter of whom has supported policies more aligned with the Hispanic community.

Cruz himself is half-Cuban, and he's not shy about discussing his Cuban identity. However, the Texas senator typically leverages his Cuban background as a way to espouse his strong anti-Communist beliefs, rather than as a way to talk about the importance of America's immigration system. He tries, reiterating his father's "bootstraps" story, but the Hispanic voter base is looking for more than a started-from-the-bottom immigration tale; they're looking for action. Started from the bottom and now we're where, exactly?

Cruz passionately opposes Obama's executive order on immigration, calling it "illegal amnesty." In the past, he has also opposed Obama's deferred action plan for the "Dreamers" (students and young people who were brought to the United States by their parents and grew up as undocumented Americans), and has been critical of what he perceives as a failure to close the border in Texas.

Cruz's beliefs align with the Hispanic community on certain issues, but the senator may have a tough time winning over Latinos if he doesn't rethink his immigration strategy.