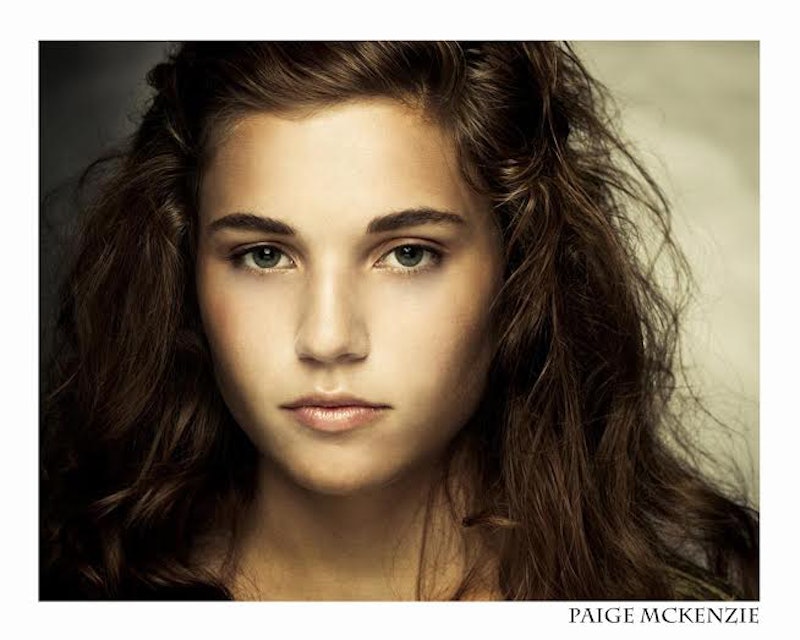 You wouldn't believe it, but Paige McKenzie calls herself a "big old wuss." McKenzie has had young adults and grown-adult women (um, me) quivering in fear with her ghost story web series The Haunting of Sunshine Girl and her new novel of the same name. (Seriously, I had to pause reading to turn on more lights.) And I'm certainly not the only one. McKenzie has scared even horror masters R.L. Stine and Wes Craven, who have spoken out to applaud the new book. But McKenzie says she's no scream queen; in fact, even E.T. scares her.

The Haunting of Sunshine Girl (Weinstein Books) follows Sunshine Griffith as she moves into a new house in the new neighborhood and discovers that her creepy, old house is haunted. For real. She and her mom Kat transplant from their home in sunny Austin, Texas to the gray, wet community of Ridgemont, Washington, which believe me, adds to the overwhelmingly creepy effect. But Sunshine's mother doesn't believe her that the house has ghosts, so she begins taking photographs, hoping to catch evidence of the ghost on film. It's with this new photography hobby that she meets fellow student Nolan, who is a believer, and who helps Sunshine in her mission to find and rid her house of the ghosts, now even more important as Kat falls into danger.

McKenzie's novel is based on her wildly successful web series, now with six seasons, with more than 100 million views and 200,000 individual subscribers. At age 16, Portland, Oregon-born Paige teamed up with her mother, actress Mercedes Rose, and producer Nick Hagen to form Coat Tale Productions and create the web series, filmed in Washington at Hagen's home. While the show began in 2013, McKenzie didn't reveal her real name (instead going as Sunshine Girl) until 2013. But with the success of the series, the book, and with Weinstein Company also looking to a on-screen adaptation, no one can forget Paige's name now.

McKenzie talked with me about all things spooky and scary, revealing her favorite scary stories and what she's really afraid of. And frankly, you're never going to guess this young horror queen's biggest fear. No, it's not ghosts. Ghosts she has covered.

And yes, that is Paige on the book cover.

1. What would you put in your top five horror books?

I have to only pick five!? That is so hard! OK, can I just say the whole Tales of Terror series by Chris Priestley? Coraline by Neil Gaiman is a big favorite! Plus, the movie was made in Oregon! I also like Miss Peregrine's Home for Peculiar Children.

2. Is there any scary book you read again and again?

Well, now that you mention it, I am rereading Uncle Montague's Tales of Terror as we speak! I just love those books!

3. (Not to sound too Scream but) What’s your favorite scary movie?

I am a big old wuss so what I consider scary might be different than most. In fact, E.T. terrifies me. The Others is probably my favorite scary movie. But if you want to just say what is the most terrifying I have to say The Haunting in Connecticut — hello, dead bodies in the wall!

I prefer to sit in my closet and watch scary movies alone! In fact, I have a whole playlist of just that.

5. What’s the best ghost story for a campfire or sleepover?

The stories that seem like they can most be real: The unsuspecting kids at a sleepover that answer the phone and the nightmare begins...

6. Do you believe in ghosts?

I so do! But I don't really believe in like demons and the whole idea of evil spirits. But I do believe there is a very thin veil between the living and the dead.

7. Have you ever seen a ghost?

Nope! And I am okay with that! But sometimes some... odd... stuff has happened while filming the videos, strange noises and just overall creepy feelings.

8. What would you do if you found out your house was haunted?

When we first moved into the house we are currently in (the house that is in the videos that are airing new now), strange things happened while we were working on it. The lady we bought the house from believed her young son who had died years before was still there at the house. While we were painting and cleaning upstairs, the TV downstairs would turn on. Her dogs would act strange and stuff like that. When we moved in we did a blessing on the house and told any spirits that might be in the house that it was time for them to move on because we really didn't have room for them. It must have worked because all the strange stuff stopped.

9. If you lived in a haunted house, would you rather call an exorcist or the Ghostbusters?

Hello, the Ghostbusters are hilarious so getting rid of the ghosts would be one big party! As long as they invited the Stay Puft Marshmallow Man!

10. What are the worst mistakes victims make in horror stories?

First, why don't they charge their cell phones before they leave the house? Or be smart like me and carry a portable charger everywhere! And ladies, never wear high heels and a short skirt if you are going anywhere near the woods! This is basic stuff.

11. What’s your favorite setting for an ideal scary story?

Well, I am from Oregon, so I have to say the woods. They are mesmerizing and you just know anything can happen in the darkest corners of the forest.

12. If you were being haunted, who would you want by your side for support from your real life?

So, since I don't actually know Veronica Mars in real life, clearly, I have to say my mum. She is pretty much the toughest chick I know and would protect me to the end.

13. If you were being haunted, what heroine from fiction, TV, or the movies would you want by your side?

Can I have a tag team of Veronica and Buffy? That would be the wonder-team!

Well, since you said most I will say mascots. You know, the people that dress up in furry costumes and you can't see their real eyes? Terrifying!

But the list of what I am afraid of includes spiders, the dark, clowns, snakes, heights, E.T., puppets, gluten... the list goes on and on!