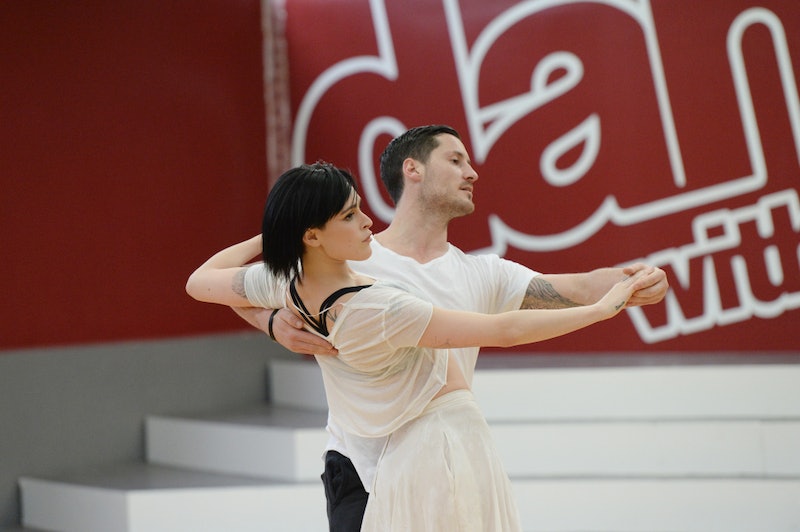 Oh Val... always a bridesmaid, never a Mirror Ball winner. Sure, there are plenty of other dancers that have been floating in Tom Bergeron's general atmosphere for many more seasons than Val (last Monday marked his eighth), but they all have at least one DWTS win, and they're not holding the record of having three consecutive celebrity partners who never scored below an eight in their entire DWTS run. And Val's streak seems set to continue: After her premiere performance and a slew of eights from the judges, his new partner is keeping the trend alive. Could Rumer and Val win Dancing With The Stars in 2015?

It's certainly time for the younger Chmerkovskiy to take the trophy. Val's last five runs with Kelly Monaco, Zendaya, Elizabeth Berkley, Danica McKellar, and Janel Parrish all seemed like they could have turned out wins for one of America's favorite pros, but alas, Kelly, Zendaya, and Janel made it to semifinals without clenching the win, and Elizabeth and Danica were both eliminated in sixth place with so much original dancing potential.

So, is the early top of the leaderboard status in Season 20 just another bad omen of beginner's luck? I don't think so; I think Rumer could really be just what the youngest Chmerkovskiy brother needs to take home the newly gold 10th anniversary Mirror Ball trophy. Rumer's name has notoriety without being so famous herself that the audience already has preconceived notions about her; there are no whispers of "ringer" with former dance experience; and her dancing is already showing huge potential for the rare combination of natural skill and improvement over time.

But in case you're skeptical, I've got more proof this is Rumer & Val's year:

What we know from Val's string of great dancers who haven't won is that being a great dancer isn't everything. It helps when you have a few other factors going for you: No substantial dancing experience, DWTS is an emotional journey, and you're willing to work extremely hard for the win. Even from the small glimpse we've seen of her so far, Rumer has all that going for and it's tied up nicely into one of DWTS' favorite tropes: The perfectionist. But whereas, say, Elizabeth Berkley's perfectionism made her a little frantic, Rumer seems completely focused, and that will likely play itself out as her becoming a better and better dancer while slowly revealing the fun side of her personality. Everybody loves a natural progression.

Bonus: After last season's great chemistry with Janel, but kind of forced shipping storyline, it would probably be best for Rumer and Val to just be young, attractive, great pals. We'll see...

OK, But Rumer Is a Really Great Dancer

OK, yes, it will totally help that Rumer seems to have a lot of natural grace on the dance floor. Most importantly, that grace comes with very little prior training, leaving room for plenty of improvement over the course of the season. There is nothing the DWTS audience likes better than watching a lump of no-technique coal get polished into a pro-level diamond, and that's an angle Val hasn't really had going for him since Danica, and Danica didn't have...

Rumer has Demi Moore and Bruce Willis in the audience cheering her on and daring anyone not to vote for her, respectively.

Flat out, it's really cool to see those two in the DWTS audience. One of the best things about Dancing With the Stars is getting to see C-list celebrities get really into being victorious at something, but when that also brings A-list celebrities to the audience, that is an unbeatable combination. My prediction: Rumer is coming in as Bruce and Demi's daughter and leaving as Val's very first victor.