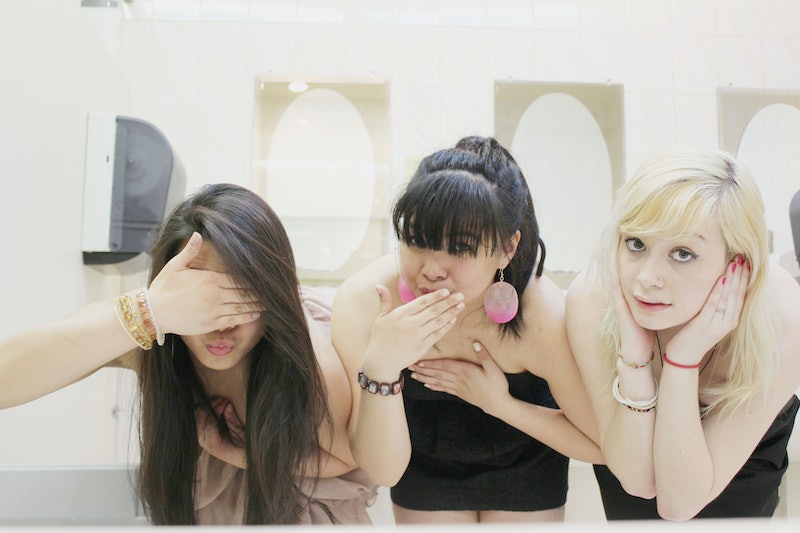 There are so many things that are a natural part of life for women, yet for some reason, we're not "allowed" to talk about them: Why, for example, is it frowned upon by society to announce when you have to change your tampon, but not at all weird if you announce you have to get up to pee? When you think about it, there are lots of other things women are trained not to say or do (and not all of them related to our menstrual cycles — promise). That's why this video about the topic by the folks over at BuzzFeed is so important: It draws attention to this whole phenomenon and points out exactly how much sense it doesn't make.

Side note: Does anybody else awkwardly stalk to the bathroom trying to hide their tampon in their pocket or hand when they're on their period, so as to not offend anyone's delicate sensibilities with the sight of an unwrapped tampon? Even though I think it's ridiculous, I still do it. I could totally see this being part of Buzzfeed's follow-up video, entitled "10 Things Women Aren't Supposed to Do."

Or as the rest of the Mean Girls-quoting population knows it:

2. Asking Guys Out On A Date

Most guys would actually be relieved that a girl asked them out on a date, wouldn't they? I mean, sure, we're told that a guy is "supposed" to do it, but I don't think most dudes would be weirded out if the girl asked. At least, I hope not.

It's weird because every guy who has a mom, sister, girlfriend, etc. should be pretty familiar with periods. It shouldn't be a big deal, but somehow it is.

Watch the full video below — and maybe let's think about the things we filter out because we feel like we're "supposed" to. That's right, I am going to tell my male coworker the reason I look tired is because I was up all night with really bad cramps! Ha! Take that, patriarchy!