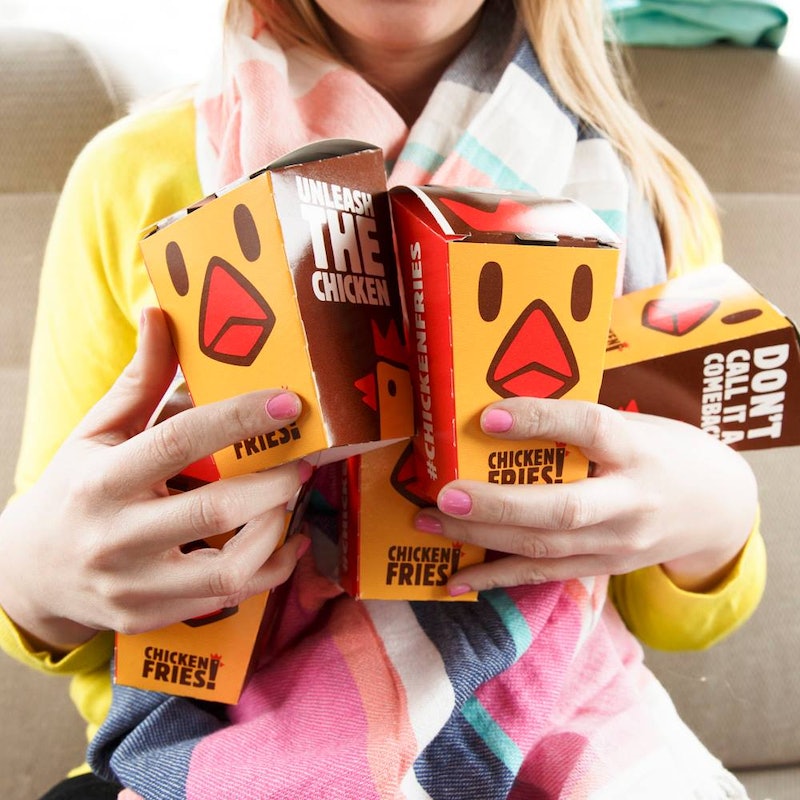 Once upon a time, way back in 2005, a new item was introduced to a specific fast food chain's menu to great acclaim: Burger King Chicken Fries. For many years, these magical strips of fried chicken goodness reigned supreme… until one horrible day in 2012, they vanished, having been discontinued in favor of making way for new and exciting chicken-based snacks. But good news, everyone! Burger King's Chicken Fries have returned — and this time, they're here for good!

Somehow I missed this story, but apparently Burger King sent a chicken named Gloria on a pilgrimage last week, instructing her to visit each and every BK location in the nation in order to determine which ones were worthy enough to have Chicken Fries grace their menus once more. Exactly how did I miss this curious event? No idea; you would have thought that a chicken making an epic quest in the name of Chicken Fries would totally be my jam. Ah well. Can't win 'em all. In any event, Gloria eventually decided that all Burger King locations had proven their worth; as such, they'll be popping up across the nation from here on out.

“The conviction of Chicken Fries fans never ceases to amaze us,” said Burger King Chief Marketing Officer North America Eric Hirschorn in a press release. “Chicken Fries have taken over their brains, not to mention, their appetites. So we're happy to tell devoted fans, and newbies alike, that we're giving them exactly what they asked for: Chicken Fries are back for good.” They'll be available for “the recommended price of $2.89 for nice pieces per order” (which I think is a slightly friendlier version of “prices may vary”), as well as in combo meals. Go nuts on the dipping sauces; your choices include BBQ, Honey Mustard, Ranch, Zesty Buffalo, and Sweet and Sour.

Now if you'll excuse me, I have a very important message to pass to Tom Haverford.

More like this
Heinz Just Relaunched A Bean-Tastic '90s Fave
By Sam Ramsden
How Long Does Leftover Stuffing Last? Here's When To Toss It
By Chelsey Grasso and Alexis Morillo
Pepsi’s Festive Flavour Is Finally Coming To The UK
By Sophie McEvoy
16 Friendsgiving Recipes Your Besties Will Love
By Alexis Morillo
Get Even More From Bustle — Sign Up For The Newsletter