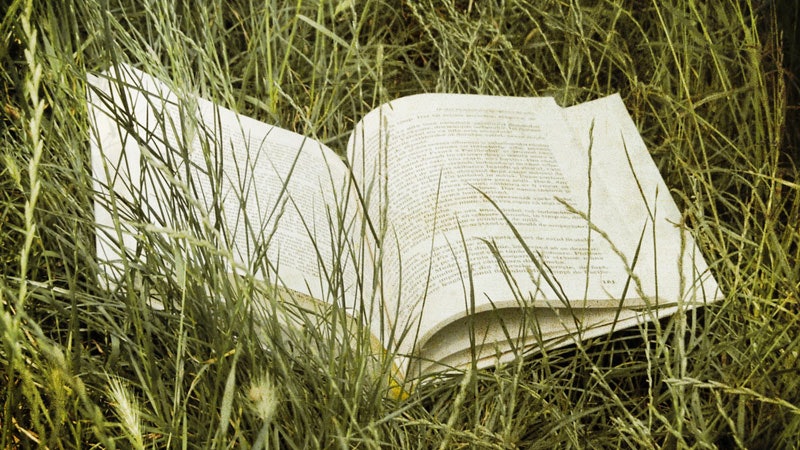 You may think of Earth Day as that holiday you commemorated in grammar school by fashioning together some tree-themed arts and crafts, but since then, regarded with only a passing interest, or admittedly ignored completely. Perhaps it's time to change that mindset, especially as attention to nature and wildlife conservation becomes increasingly crucial. These quotes about nature from books will help you feel connected to the earth this year. The first Earth Day took place on April 22, 1970, and since then this celebration of our planet has taken great strides to promote environmental awareness and preservation.

2015 marks the event's 45th anniversary, and it's as good a time as any to reflect upon your own relationship with the environment. If you're anything like me, growing up, you possessed an innate love for being outdoors, for digging around in the dirt or sand, or wading in shallow waters, watching your fingers turn to prunes. The first time you saw this joy of nature articulated was through literature, initially in children's stories, and then, as you got older, in more complex novels, stories, or poems. The natural world permeates many a great work of literature, so what better way to get into the Earth Day spirit than by recognizing a few of these memorable lit selections?

These 20 quotes from literature may provide just the inspiration we all need to celebrate the beauty of our planet.

1. “This is our world, although the people who drew this map decided to put their own land on top of ours. There is no top or bottom, you see.”

—Chimamanda Ngozi Adichie, Half of a Yellow Sun

2. “A choir of seedlings arching their necks out of rotted tree stumps, sucking life out of death. I am the forest's conscience, but remember, the forest eats itself and lives forever.”

3. “Happy. Just in my swim shorts, barefooted, wild-haired, in the red fire dark, singing, swigging wine, spitting, jumping, running — that's the way to live. All alone and free in the soft sands of the beach by the sigh of the sea out there..."

4. “It's daybreak. The break of day. Toby turns this word over: break, broke, broken. What breaks in daybreak? Is it the night? Is it the sun, cracked in two by the horizon like an egg, spilling out light?”

—Margaret Atwood, The Day of the Flood

5. On our way back to her house, I didn't look at the city lights any longer. I looked into the sky and felt as if the moon was following us. When I was a child, my grandmother told me that the sky speaks to those who look and listen to it. She said, 'In the sky there are always answers and explanations for everything: every pain, every suffering, joy, and confusion.' That night I wanted the sky to talk to me.”

7. “More than anything, this place feels familiar. I bury my hands in the hot sand and think about the embodiment of memory or, more specifically, our natural ability to carry the past in our bodies and minds. Individually, every grain of sand brushing against my hands represents a story, an experience, and a block for me to build upon for the next generation."

—Raquel Cepeda, Bird of Paradise: How I Became Latina

8. “Time is more complex near the sea than in any other place, for in addition to the circling of the sun and the turning of the seasons, the waves beat out the passage of time on the rocks and the tides rise and fall as a great clepsydra.”

9. “How healing it was to be back at Gombe again, and by myself with the chimpanzees and their forest. I had left the busy, materialistic world so full of greed and selfishness and, for a little while, could feel myself, as in the early days, a part of nature."

10. “The desert could not be claimed or owned — it was a piece of cloth carried by winds, never held down by stones, and given a hundred shifting names..."

11. "The sigh of all the seas breaking in measure round the isles soothed them; the night wrapped them; nothing broke their sleep, until, the birds beginning and the dawn weaving their thin voices in to its whiteness."

—Virginia Woolf, To the Lighthouse

12. “Deep in the forest a call was sounding, and as often as he heard this call, mysteriously thrilling and luring, he felt compelled to turn his back upon the fire and the beaten earth around it, and to plunge into the forest, and on and on, he knew not where or why; nor did he wonder where or why, the call sounding imperiously, deep in the forest.”

—Jack London, The Call of the Wild

13. “If fire doesn't raze the mountain, the land will not be fertile.”

14. “The clouds were building up now for the trade wind and he looked ahead and saw a flight of wild ducks etching themselves against the sky over the water, then blurring, then etching again and he knew no man was ever alone on the sea.”

—Ernest Hemingway, The Old Man and the Sea

15. “Those shining stars, he liked to point out, were one of the special treats for people like us who lived out in the wilderness. Rich city folks, he'd say, lived in fancy apartments, but their air was so polluted they couldn't even see the stars. We'd have to be out of our minds to want to trade places with any of them.”

16. “As I looked about me I felt that the grass was the country, as the water is the sea. The red of the grass made all the great prairie the colour of winestains, or of certain seaweeds when they are first washed up. And there was so much motion in it; the whole country seemed, somehow, to be running.”

17. “Have you also learned that secret from the river; that there is no such thing as time?" That the river is everywhere at the same time, at the source and at the mouth, at the waterfall, at the ferry, at the current, in the ocean and in the mountains, everywhere and that the present only exists for it, not the shadow of the past nor the shadow of the future.”

18. “The woods call to us with a hundred voices, but the sea has one only — a mighty voice that drowns our souls in its majestic music. The woods are human, but the sea is of the company of the archangels.”

19. “I kept staring into the blackness of the woods, drawn into the darkness as I always had been. I suddenly realized how alone I was. (But this is how you travel, the wind whispered back, this is how you've always lived.)”

More like this
‘Squid Game’ Creator Hwang Dong-Hyuk Just Dropped A Major Season 2 Tease
By Brian Anthony Hernandez and Bustle Editors
Nicola Coughlan Shared A Lady Whistledown Excerpt From ‘Bridgerton’ Season 3
By Grace Wehniainen, Alyssa Lapid and Sam Ramsden
She Founded American Girl To “Bring History Alive.” Then She Made Over A Town.
By Amanda FitzSimons
10 Must-Read New Books Out This Week
By K.W. Colyard
Get Even More From Bustle — Sign Up For The Newsletter