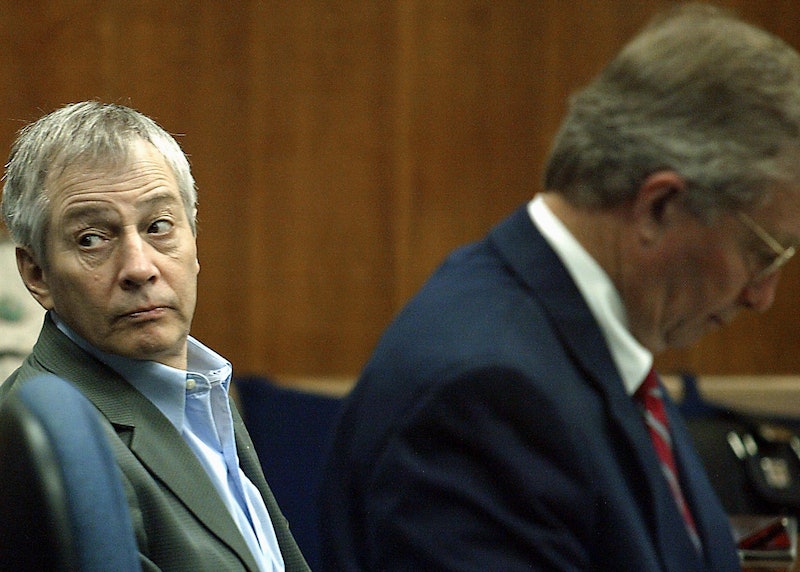 Infamous for his alleged involvement in three murders over the course of decades, Robert Durst went back to court Monday where a New Orleans judge ordered that the multimillionaire be held without bail. This is not Durst's first go at a murder trial though, as he went to court in 2003 and charged with the murder of his neighbor, Morris Black. Bizarrely enough, Durst was acquitted despite admitting to killing the 71-year-old man, cutting up his body, and throwing it into the bay.

Durst was ultimately found not guilty for the murder of Black because he claimed it was self-defense. Let's back track a little to get the full story of Durst's acquittal: The alleged murderer, the member of a wealthy Manhattan real estate family, first came into the national spotlight when his first wife, Kathleen, went missing in 1982. Then, his friend, Susan Berman was found shot to death in her home in 2000. No one was ever charged with the murder of Kathleen or Berman, though in the recent HBO documentary The Jinx, Durst murmured an apparent confession that he "killed them all."

According to The New York Times, Durst testified in his 2003 trial that he fled New York for Galveston, Texas in 2000 because the Westchester County district attorney had reopened the investigation into the disappearance of his first wife and he believed he would be wrongfully charged. While living in Galveston, Durst disguised himself as a mute woman and befriended his neighbor across the hall, Black. They often watched TV together and went target shooting, and Durst testified that Black had shot a pistol twice in Durst's apartment, to his horror.

On Sept. 28, 2001, Durst said he came home to his apartment to find Black watching his TV. He described how he raced into the kitchen and found that his .22-cailber handgun was missing. When he turned around, he saw Black with the gun. The New York Times reported at the time of the trial that Durst told the jury:

I was concerned that Morris was going to shoot the gun, most likely at my face.

He said that the two struggled and the gun ultimately went off, fatally shooting Black in the face. Here's where the degree of self-defense becomes blurred: Durst testified that he panicked after thinking no one would believe his account of this story, so with the help of drugs and alcohol, he dismembered Black's body with a bow saw and triple-wrapped the pieces in trash bags. He then dumped the bags in the Galveston Bay, where they were later found floating in the water. In an even creepier turn of events, Black's head was never found. After he was arrested for the murder, Durst hopped bail and drove to Pennsylvania, where he was caught shoplifting from a supermarket.

The jury explained after the trail that the prosecution failed to prove that the murder was deliberate. According to The New York Times, in a news conference following the trial, a juror said:

The defense told us a story and stuck to it. The D.A. gave us multiple scenarios of what may have happened.

Ultimately, Durst was acquitted because there was not enough evidence to prove that he had planned or intended to kill his neighbor. Now he's back in court for the murder of Berman after the police found new evidence incriminating him. Will he plead self-defense again?