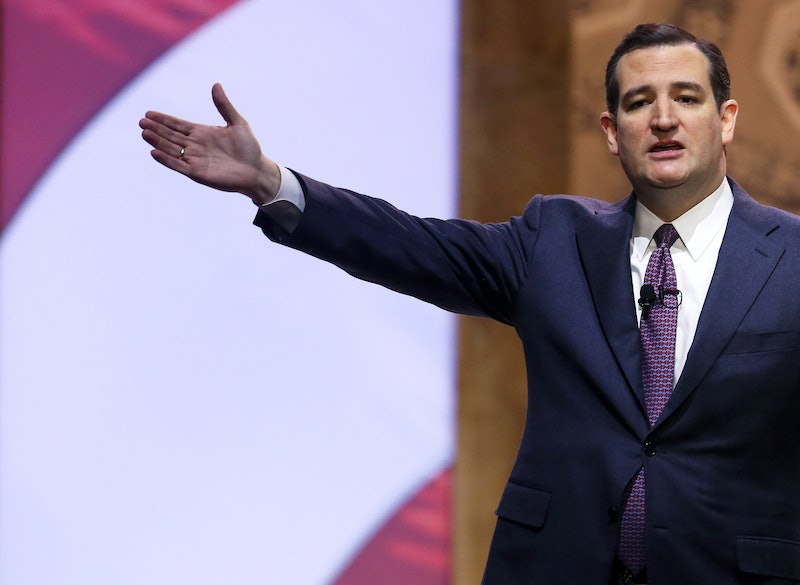 After Ted Cruz announced his official bid for the White House on Monday morning (via Twitter of course), the world was in a tizzy — and not necessarily in a good way. The Republican senator from Texas has, after all, said some pretty interesting things in recent years that would lead his opponents and the general public to believe that he might not be the best choice for President of the United States. As the current chair of the Subcommittee on Space, Science, and Competitiveness (which oversees NASA), his previous statements on things like climate change, internet regulation, and creationism have left much to be desired — but it's Cruz's current views on abortion that should really be triggering alarm bells.

In a moment in time when women's rights are either on the precipice of something groundbreaking or toeing the line between modern feminism and a complete regressive roll, a far-right GOP candidate like Cruz might not be the best choice — both for his own party and for Americans in general. It wasn't too long ago that the GOP's own female representation slammed its foot on the brakes of the anti-abortion vehicle, stopping a partisan bill back in January that would have prevented rape and incest victims from seeking procedures unless they had formally reported the crime to the police. Nominating Cruz to the presidency wouldn't just be a curious move on the part of Republicans — it would potentially be a slap in the face to those in his party who have tried to extend a hand across the aisle and actually get things done.

In case you're wondering whether or not Cruz's statements on abortion and preventative care are really so bad, here's a quick refresher on some of the outlandish things the now-official presidential hopeful has said in the past.

In a 2012 op-ed for the National Review , then-congressional candidate Cruz called the contraceptive and abortion mandates intertwined with the Affordable Care Act (ACA) "outrageous" and "arrogant":

President Obama’s contraception mandate arrogantly tramples on the rights of many Catholics, trying to force them to violate their faith. But this is a battle for all Americans, Catholic or not, because the destruction of liberty never takes place overnight.

Make no mistake about it: There is a war going on, a government assault on our liberty. If we do not engage, we will lose the fight. We must stand and fight for that liberty now, and expand the ranks of those who will fight in the future.

Cruz maintained that the mandate requiring businesses to provide "abortion pills" to employees and staff members was detrimental to "the basic rights of everyone" (except women, obviously). Of course, Cruz's outrage was based on the same flawed logic as many lobbyists in Washington who believed that morning-after pills like the brand Plan-B (which prevents a fertilized egg from implanting in the lining of the uterus) essentially caused abortions, since they considered a fertilized egg to be a person. It's an utterly baseless claim — but when trying to entrap the votes of far-right conservatives, it's like honey to bees.

Pro-Choice Legislation Is The Real "War On Women"

In July 2014, just as the "war on women" dialogue was being ramped up by both parties in an effort to gain valuable support among female voters, Cruz's bizarre statement during a Senate Judiciary Committee hearing really turned some heads (and probably not in the way he would have hoped). During the debate over unlimited access to abortion services, Cruz told Committee members,

This legislation is a very real manifestation of a war on women, given the health consequences that unlimited abortion access has had on many woman.

This legislation being considered is extreme legislation. It is legislation designed to eliminate reasonable restrictions on abortion that states have put in place. It is designed to force a radical view from Democrats in the Senate: that abortions should be universally available, without limits, and paid for by the taxpayers.

Those who vehemently defended Cruz's backward views on female healthcare added that the bill to allow open access crushed "even the most minimal protections for unborn children" while maintaining that both Cruz and his party only wanted "what's best for women." (Sigh.)

While most people commemorate tragedies like the September 11 terrorist attacks or the bombing of Pearl Harbor by setting aside a moment of silence or working to honor those who have given their lives in the defense of others, Sen. Cruz has a slightly different idea of what merits a day of mourning. In a January 2013 Facebook post, Cruz lamented the historic Roe v. Wade decision of 1973, which finally allowed women legal (and safe) access to abortion services, calling the ruling a "dark anniversary" in the pro-life fight.

Today marks the dark anniversary of Roe v. Wade, the Supreme Court decision that overturned a Texas law that prohibited abortion on demand. Since that 1973 ruling, more than 55 million lives have been lost to abortion.

... No right is more precious and fundamental than the right to life, and any just society should protect that right at every stage, from conception to natural death.

While the majority of Cruz's followers supported his curious, emotionally inflated statements, some questioned his 100 percent pro-life stance, maintaining that forcing pregnancy burdens on rape victims and those unprepared for parenthood could lead to traumatic episodes or cause emotional harm to the child itself after birth.

Throughout his political career, Sen. Cruz has spent a good deal of time defending the most staunchly conservative of "American" ideals. And while his inaccurate views on women's health and abortion legislation may be perceived by many to be antithetical to overall nationwide progression, they might just be enough to push him over the top into the big leagues.