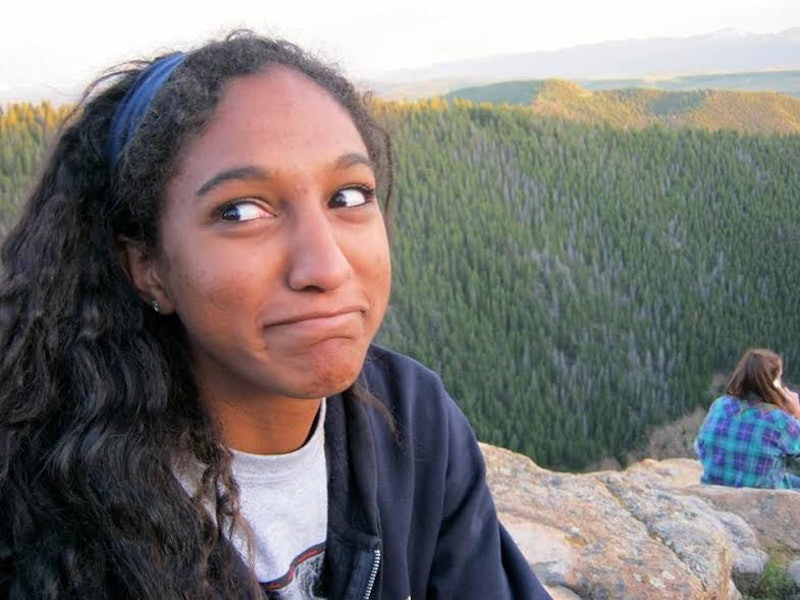 I'm awkward. There's really no getting around that ultimate truth of my life. I am definitely, undeniably awkward. I can't dance, I grew up playing the French horn, and I was the president of my school's marching band. I prefer watching anime and reading graphic novels over socializing. I can't hold a conversation with more than two people at once, and mingling is a special level of personal hell for me. I firmly believe that cell phones were a blessed invitation sent by the awkward gods to protect so many of us from our own social mishaps. Yes, I'm awkward, and I'm also black. I'm one of the many young women who, thanks to Issa Rae's viral YouTube show, The Misadventures of Awkward Black Girl, learned it's totally possible for blackness and awkwardness to intersect.

"I'm awkward and black. Someone once told me those were the two worst things anyone could be. That someone was right," is the astute truth that's laid out right as "The Misadventures of Awkward Black Girl" first begins. It's a web series that's all at once gut-bustingly funny, self-deprecating, and 100% relatable. The first episode I ever watched was in my friend's dorm room. Jay, who also happens to be the titular awkward black girl, was freaking out because she is going to a party and she doesn't know how to dance. The party scene includes her standing awkwardly by herself, nervously grasping at her arms and not knowing where to look. "Standing alone at parties is the clearest indication that nobody wants you. Should I try to make friends? Do I need to act like I'm having a great time? Are people looking at me? Maybe if I dance next to this guy, he'll recognize his urge to dance with me," she wonders via voiceover. Every scenario put forth in the series is, for fellow awkward black girls, painfully, hilariously, wonderfully relatable.

"Oh my god,"I thought when I first watched the series, "This is totally me."

The truth is that it's not just me who can relate to these moments of young adult awkwardness—it's any introvert at a party. But how often do we see that represented by a black woman? Out of the few characters I've encountered through books, movies, and TV shows that I identify with in terms of their personality, none of them look like me. And out of the few characters I relate to identity wise, none of them act like me. In all areas of media, the subconscious message I was receiving loud and clear for my whole life was that I didn't act the way people who look like me are "supposed" to act, and that I would always be an outcast when it came to people with whom I had things in common. It's enough to make an awkward black girl feel like she's all wrong, and misunderstand, and unrecognized, which is all clearly not a great way for a young person to feel.

After watching her show, it struck me as weird that whiteness always served as the default for quirkiness. White people, in TV and movies, had a monopoly on bumbling charm, and endearing nerdiness. Where on earth were all the black nerds? People of color are complex and multifaceted people in real life — why can't they be complex and multifaceted on screen? The majority of writers and creators seem content to fulfill the expectations of their audience by reaffirming stereotypes and firmly settling into existing boundaries. Issa Rae's web series shatters so much of that. The main character, Jay, is smart, witty, and cracks us up with her under-the-breath snark—and she's black.

1. Stop Signs Cause You Anxiety

For whatever reason, people just take one look at you and assume you have rhythm. Well guess what buddy, I don't. Prepare to watch me offbeat two-step my way through this Nelly song.

Long hallways on their own are fine. But when you have to walk past someone though? Game over. Do you wave? Do you smile and nod? How rude is it to avoid eye contact? You're awkward, so you'll probably never find the right answer.

4. Your Comebacks Are Never Fast Enough

If only people would stick to insulting you online so that you could have enough time to think of a witty reply.

5. You Never Know How To React To People Touching Your Hair

Laugh? Pull back? Smack them? By the time you run through all of the options and their consequences, their greasy claws are already out of your mane.

6. You Gravitate Towards Other Awkward Individuals

I sincerely hope that others can have a friendship as awkward and pure as Jay's and Cece's.

7. You Rap Your Emotions

8. You Hate Being Held Responsible For Initiating Conversation

Does anyone like to do this? I sincerely hope there are people out there in the world who are okay with this so us awkward chicks don't have to be.

9. Parties are THE WORST

*See the entire introduction to this article*

Check out "The Misadventures of Awkward Black Girl" here: