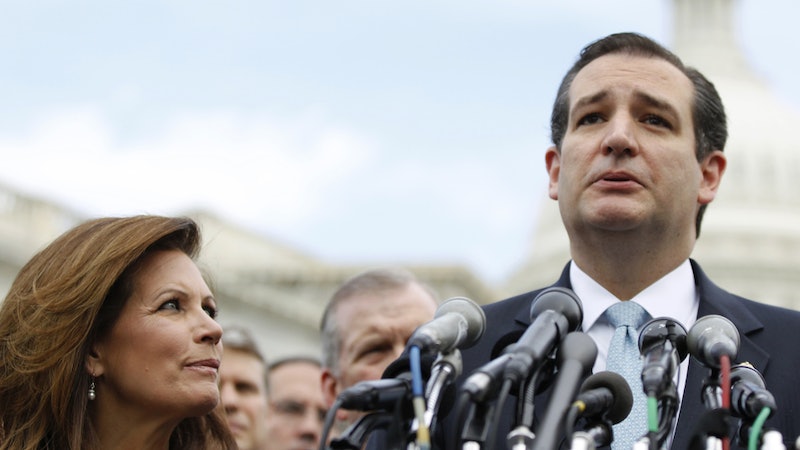 It’s now rather obvious that the GOP’s decision to shut down the government was a horrible decision, both for the Republican brand and for the country as a whole, and yet somehow, the party is still squabbling with itself over whether or not to do it again in a couple of months. On one side, there’s Minority Leader Mitch McConnell, who this morning ruled out another shutdown and criticized the type of thinking that led to the last one. On the other side, there’s the boy wonder from Texas, Ted Cruz, who hinted today that he may usher in another shutdown if he sees it as a viable way to kill Obamacare.

While McConnell is no less conservative than Cruz in ideology, he’s a shrewder political operative and can distinguish good publicity from bad. Speaking to The Hill this morning, he made it clear that while he does indeed hate Obamacare, the shutdown was “a losing strategy” and he won’t push for it next time.

If there’s no education in the second kick of the mule, and this latest shutdown was the second kick, that would suggest that the GOP hasn’t learned anything from the last two weeks and might shut down the government again. But botched metaphors aside, recall that McConnell opposed this shutdown, too — he allowed the clean CR to pass the Senate — yet it happened anyway. The simple fact is that, as a Senator, McConnell can’t control House Republicans. If they want to shut down the government again in three months, McConnell can't do anything to stop them.

Which brings us to Ted Cruz, who was largely responsible for encouraging the Republican House to shoot itself in the foot two weeks ago. In an interview with ABC’s Jonathan Karl this morning, Cruz was asked point-blank whether he’d rule out another shutdown.

“I would do anything, and I will continue to do anything I can, to stop the train wreck that is Obamacare,” Cruz replied. “The test that matters, Jon, is are we doing anything for all the people that are getting hurt from Obamacare?”

The implication is that if shutting down the government can stop Obamacare, then by God, that’s what Cruz will do. But this episode proved pretty indisputably that it can’t, at least as long as Harry Reid and President Obama are in office. What Cruz is really doing here is bolstering his Tea Party bona fides, ensuring that the Republicans he led so gleefully into humiliating defeat don’t doubt his commitment to the good fight. If their support is what he’s most concerned about, there's no reason he wouldn't push for another shutdown in the future.

To call the shutdown a miscalculation by the GOP is slightly misleading, as that suggests that a calculation was made. It was more of an impulsive grab, like a child snatching up a shiny object the moment it catches the sun’s rays. The Republican party instinctively leapt at an opportunity that, at an extremely superficial and rudimentary glance, seemed to have a shot at defeating the Affordable Care Act. Yet the plan was doomed to failure from the start, as evidenced by the fact that it failed in exactly the manner its critics had predicted it would.

The question now is whether, when faced with the same choice in a couple of months, the GOP will act any differently. McConnell says it will, but he lacks the power to ensure this; Cruz suggests that it won’t, and unless his standing with Tea Party Republicans in the House plummets significantly between now and January, there’s really no reason to doubt him.

More like this
'Waterloo Road' Is Back, With More Than A Few Familiar Faces
By Sam Ramsden and Vivian Iroanya
The Best Memes & Tweets About Twitter’s Potential Shutdown
By Alexis Morillo
Prince William Condemns “Unacceptable” Comments Made To A Black Guest At Buckingham Palace
By Shahed Ezaydi
Matt Hancock Broke a Major Rule With I’m A Celeb
By El Hunt
Get Even More From Bustle — Sign Up For The Newsletter