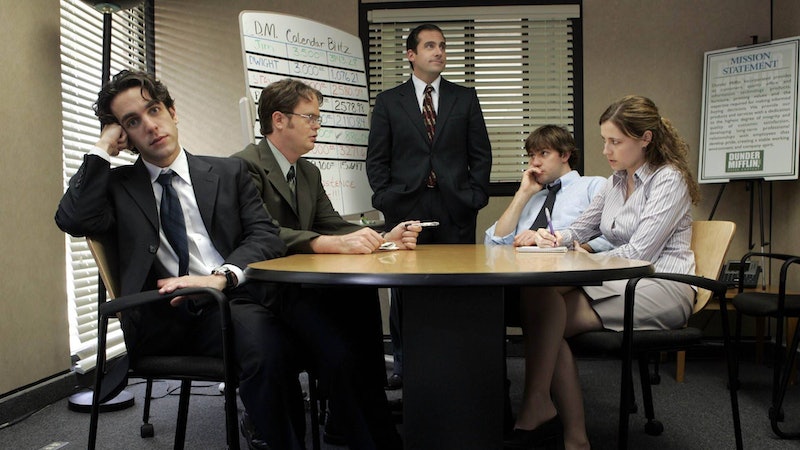 It may have been nearly two years since The Office series finale aired, but I refuse to believe my favorite show is actually over — and thankfully, frequent Netflix binge watches make it that much easier to imagine that's true. There are few shows I've loved as much (or quoted as much) as The Office, and it's crazy to think that it's already been 10 years since we were first introduced to the workers of Dunder Mifflin. An entire decade has passed since the show premiered, which means there have been 10 years of Jim and Pam adorableness, 10 years of awkward, straight into the camera stares,10 years of "that's what she said" jokes, and 10 years of Jim and Dwight prank wars. One of my favorite ways to remember the show, though, is through looking back on behind-the-scenes photos The Office cast has posted on Instagram and Twitter. It looks like it was the most fun group of people to work with ever.

After plenty of digging through various cast members' social media accounts, I was able to unearth some of the coolest photos from filming ever. The good news? These photos are awesome to look back on. The bad news? It makes me miss new episodes of my favorite show more than ever.

Are you ready? The nostalgia is about to hit you like a ton of bricks... or like that 18-wheeler hit Michael's old boss, Ed Truck, and decapitated him when he was drunk.

Sigh. What a perfect couple.

Jim and Pam Being #RelationshipGoals

I wish they were a real couple so bad. If only John Krasinski and Emily Blunt weren't so meant for each other.

This is from Season 9 episode "Stairmageddon — you know, when everyone in the office had to take the stairs because the elevator in the building was undergoing maintenance. Stanley obviously didn't fare so well.

I'm not crying, YOU'RE crying.

Dwight & Esther On The Farm

Thank God they didn't get married. I don't want to imagine a world where Dwight and Angela aren't together forever.

John Krasinski Being The Cutie That He Is

Could you imagine getting your makeup done with these three?!

An Undercover Photo From Jenna Fischer to Angela Kinsey

Rainn Wilson Gets Ready To Be Dwight

What a legendary shirt.

The Scranton Business Park At Sunrise

On a trip to LA last summer for a wedding, I snuck off to investigate this location. Yes, it is just as magical in person.

What a storyline that was.

One Of The Cast's Final Table Reads

And If You Really Feel Like Crying, You Can Always Watch This...

More like this
Netflix Reveals First Look At Wednesday In The 'Addams Family' Spinoff Series
By Bustle Editors
Kenan & Kel Just Reunited At The 2022 Emmys & Twitter Is Overjoyed
By Grace Wehniainen
What Does Nancy Jo Sales Think Of 'The Real Bling Ring'?
By Arya Roshanian
12 ’90s Movie References You Missed In 'Do Revenge'
By Radhika Menon
Get Even More From Bustle — Sign Up For The Newsletter