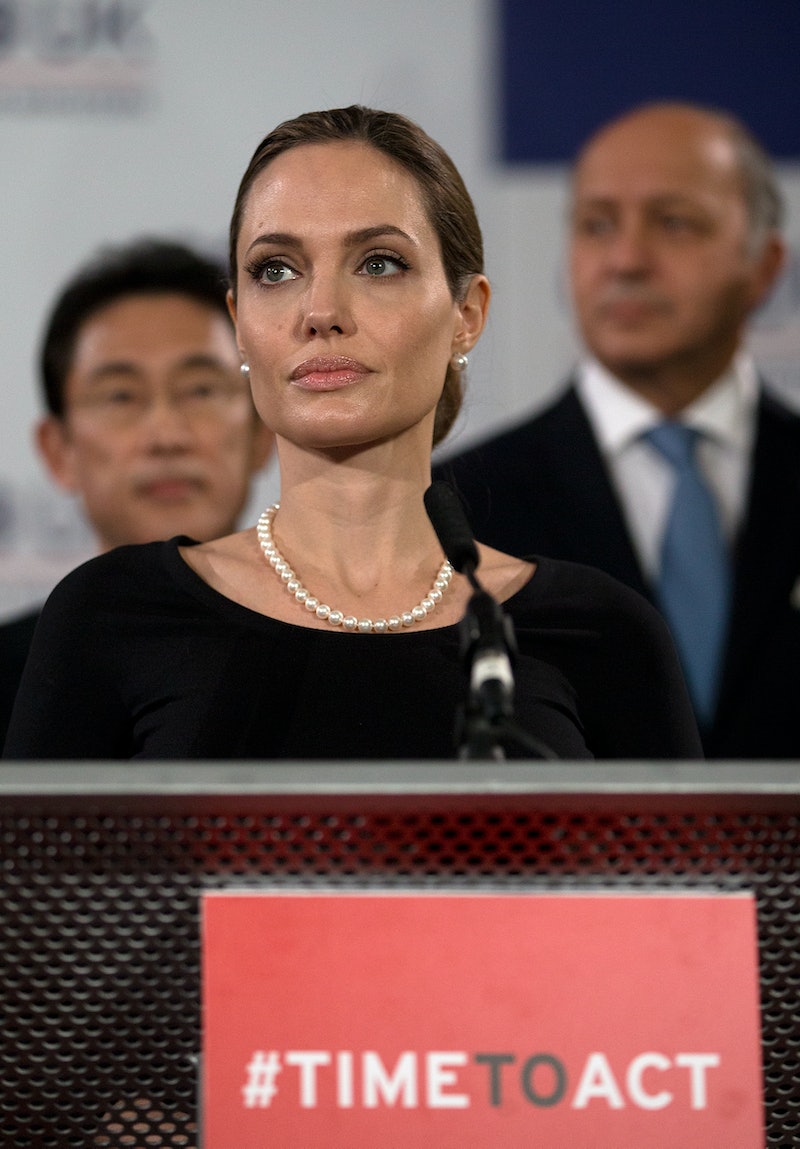 I come at this news from a strange place of partial empathy and total sympathy. Like Angelina Jolie, the women in my family have a history of cancer. Unlike Jolie, none of the women in my family that I was alive to know have ever died from the disease. So when the New York Times op-ed piece revealing that Jolie has removed the ovaries to prevent cancer came out, I read it with a mixed sense of dread and secondhand relief. This preventive surgery might seem like a severe move coming too quickly after Jolie's double mastectomy in 2013, but the emotions that the actress cycles through in her op-ed alone make it clear that she had no other choice. Not for her own peace of mind. And that is something that I deeply understand.

For most of my life, cancer has been the boogeyman that my sister and I feared. If she had a mysterious dark spot appear on her skin, it was cancer and not a beauty mark. If I had a lump anywhere — even at the site where I had just hit my knee — it was cancer and not benign. We walked the streets paranoid of carcinogens, we ate dinner paranoid of carcinogens, and we expected the worst at every physical. We still do. Cancer claims the lives of 7.6 million people each year, three in our own family, and it was not something that we would take lightly even if we hadn't known those members of the family.

And that's why Jolie's op-ed is so important. There is no life that this disease has left unaffected. Even if you haven't lost anyone to cancer, even if you are not at high risk for cancer yourself, it's likely that you know someone who has been personally impacted by the disease. And even if you can't even claim that much, there's not a single person out there who does not at least partially fear that diagnosis. Jolie's story provides a publicized spin on the cancer narrative. In the media, and thus in life, it seems as if you have only two options: fearing the disease and slowly dying from it in between stages of remission. Preventive surgeries aren't often explored in pop culture, despite how often they occur in the real world, and Jolie provides a real-world role model for that kind of bravery and survival instinct.

Is Jolie the first person to have ever gotten preventative treatment to avoid the cancer she is at high risk for? No. Is there still a chance, no matter how small, that she might develop cancer even after her surgeries? Sadly, yes. But, in keeping with the strong woman we have all come to know her as, she has taken her fate into her own hands. Even if she does get diagnosed with cancer, Jolie can at least face her diagnosis with the knowledge that she did all that she could to protect herself, and to prevent her family from ever having to suffer through this disease with her. Thus, it comes as no surprise that fans have been incredibly supportive of her decision to undergo this surgery — because when we read her op-ed piece, it hits us all again how easily, how suddenly, we could find ourselves in Jolie's shoes.

Of course, there are still those who neither understand why Jolie's surgery is international news nor do they understand why Jolie has gone to the extremes that she has. And those are both valid ways to feel, even if I disagree with them. The fact of the matter is, this story isn't just about Jolie's surgery. It's about opening a public discourse about cancer — that taboo disease that often feels like we can call it down upon ourselves just by saying the word — and about how one doesn't necessarily need to wait for a diagnosis in order to take steps to extend one's life. Jolie is sharing her experience to raise awareness of the many different kinds of experiences that fall under the umbrella of the "C-word." She is sharing her experience because she is a visible, beloved public figure, and she knows that her story will reach more eyes and ears than that of the average woman who has undergone preventive surgery.

In doing so, she is performing a service for women everywhere. They are not alone. This can happen to anyone, regardless of success or sociopolitical status or financial comfort. There are more options to having a genetic history of cancer than living in fear. Jolie is not the first woman to undergo such surgery, and she certainly will not be the last woman to undergo such surgery. But she told her story because she knew it would have the most impact, because it has the potential to help more people, and because, for 1000 words, women like myself no longer felt alone in living with that fear. In Jolie's own words, "I feel at ease with whatever will come, not because I am strong but because this is a part of life. It is nothing to be feared."

More like this
Twitter Is Identifying With Sally Field & Jane Fonda’s Friendship In New Viral Video
By Jake Viswanath
The Beauty Device Kristen Bell Uses Every Single Morning
By Carolyn Steber
"Lavender Haze" Star Laith Ashley Breaks Down Filming With Taylor Swift
By Jake Viswanath
Who Is Murray Bartlett Dating? 'The Last Of Us' Star Is Extremely Private
By Alyssa Lapid
Get Even More From Bustle — Sign Up For The Newsletter
From hair trends to relationship advice, our daily newsletter has everything you need to sound like a person who’s on TikTok, even if you aren’t.