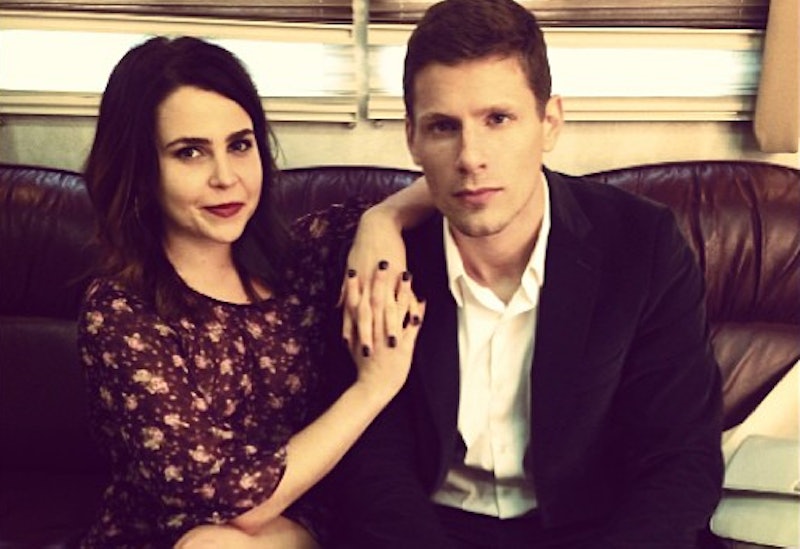 Amber Holt has always been my favorite character on Parenthood. She started out as an obstinate teenager, but there was something about Mae Whitman's portrayal of her that immediately imbued her with more soul than that trope often allows for. As such, I am heavily invested in whatever happens to Amber — Whitman is the best cry-er on TV, after all — but my rabid fandom is such that I only want her tears to come from happiness.

This is why, when Amber finally got a major romantic plot-line on the show — Bob Little was cool but also vaguely creepy and definitely temporary — I was super psyched. As a diehard Friday Night Lights fan I was chanting "CLEAR EYES FULL HEARTS CAN'T LOSE" to myself and quietly weeping whenever the former Luke Cafferty was onscreen as Ryan York. He was a damaged recent war vet, he was sweet as hell and super into Amber, and, as the Internet kids say, I shipped it immediately.

I have never stopped shipping it. But, as most great dramas go, things got complicated as the characters' problems got more human. Amber may have grown a lot emotionally since her start on the show, and her love story with Ryan was one of the highlights of Season 4, but Ryan York, while still radiating gentleness, was damaged by his time in the war and by a past we still know very little about. It led to Ryan and Amber's breakup last year — Amber was trying to avoid going down the path her mother went down with her addict father. She saw warning signs of being responsible for completely propping up the man that she loved, and having witnessed her mother go through that, she wanted to free herself from that fate and give Ryan room to grow on his own.

It was that aforementioned darkly mysterious past of Ryan's that was pointed out in this week's episode when Amber takes her mother Sarah (Lauren Graham) to see the spot she's picked out for her upcoming wedding. Because when Sarah asks about Ryan's family, it is revealed that they're not coming to the wedding. As Ryan mentions to Amber later — after being pressed, as it's obviously not something he's super comfortable talking about — his father is dead and was replaced by an awful stepfather who, although we don't know his specific crimes, would ruin any wedding festivities just with his presence.

As a general rule of thumb, it tears me up whenever Lauren Graham fights with one of her fictional TV daughters — don't even get me started on what that Season 6 Gilmore Girls fight did to me — but Sarah Braverman brings up an excellent point to Amber: is it wise to marry someone you don't know that much about? And as another rule of thumb, Lauren Graham's mother characters tend to be right in those aforementioned fights.

Whether or not Sarah is right here, this storyline is intriguing on a couple of levels. On level one, you've got the run of the mill premise of history possibly repeating itself; Sarah married an addict (Amber's father, with whom Amber is largely estranged) when young and impulsive and, as she says in this episode, she was naively hopeful and fully in love.

It's the "I don't want you to make the same mistakes I did" of it all, and it's especially interesting because Amber did see herself starting down that path with Ryan last season and it led to breaking the relationship off until she felt he'd grown enough. And it appears Ryan has grown, in many significant ways. But growth, especially in this time frame, does not fully erase one's path.

On another level, Ryan presents an intriguing opportunity or two, and which one ends up going down depends very much on a few key creative choices.

Because, for all his internal damage, Ryan is great; he and Amber have awesome chemistry. More than that, though, Ryan's actually bizarrely well-equipped already to join the Braverman clan: He's friend with Braverman patriarch Zeek, and when he first meets the family Amber remarks that he "fits right in." Last week he jumped in on Drew's college storyline with the tenacity and forceful sass of a Braverman, and he aligns pretty well with Kristina in that she, too, has a family whom we haven't even met yet but know they have routinely ignored her even through her cancer storyline. The dude already fits in at the dinner table, basically.

My instincts tell me that Ryan isn't going to just disappear in the same way that, say, Jason Ritter's Mark Cyr did whenever he wasn't romantically involved with Sarah. But I still don't know exactly where they're gonna head with this. Will it be a tale of caution against young impulsive marriage decisions? Of picking a partner who isn't necessarily ready for all the help you can give, or who requires too much upkeep, too much help? Or will it be a story of how love and family — in this case the families that choose you, and not the one you were born to — can help to rebuild something that was otherwise shattered or broken?

The promo for next week suggests that we're going to start getting answers sooner rather than later: It advertises "the heartfelt confession you'll never forget" alongside a shot of Ryan showing up at Sarah's door, presumably to provide some insight into that troubled past of his.

"Not everybody has a family like yours," he says to her. And that's kind of it, isn't it? So much of what we've seen in Parenthood is the ins and outs of being part of a large, loving, tight-knit family that bickers and fights like any loving people do. But Ryan's something they've never really tackled before: He's a person who, so unlike what the Bravermans did to their children, was actively damaged by his home life, so much so that he saw going away to a war zone preferable to staying at home.

Whether this ends happily or in tears, we're interested to see where it goes, and what the show decides it wants to say about Amber and Ryan's relationship.

Although to be fair, we'll probably cry no matter what the results — this is Parenthood we're talking about, after all.