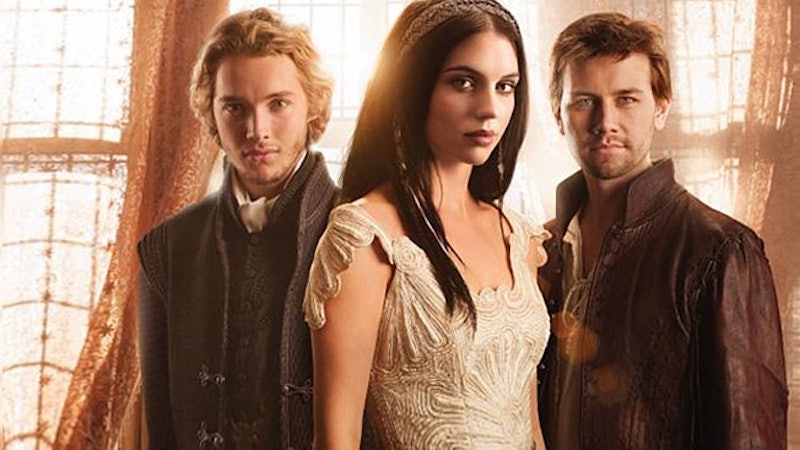 Move over, Blair Waldorf. There's new teen royalty in town. And this time, she's literally royalty. The CW's latest offering is technically a period drama technically based on the life of Mary, Queen of Scots. I say technically because, really, Reign is a steamy high school soap that just happens to be set in 16th century France. I predict that it will make Showtime's The Tudors look like a serious documentary.

Reign purports to star adorable Aussie Adelaide Kane, but this is a lie. The series actually stars Adelaide's hair accessories, which steal every. Single. Scene. The costumes don't even come close to passing as period (they show much more skin than would have been allowed, for one thing), but it's hard to care (or even notice) when you're distracted in every scene by some twinkling bauble on Mary's head. Blair Waldorf had her bows; Mary has an endless array of headpieces, bejeweled or forged from precious metals. I want to be more upset about the historical inaccuracies (which are abundant), but I kind of want to sign up to be notified when Claire's releases a Reign line of headbands more.

If Reign makes it, it's clearly setting itself up to be buzzworthy in the fashion department, but is hellbent on hooking viewers with a soapy dose of drama. The first episode features plenty of sex (everyone except our heroine seems to be having it on the reg, but that's the subject of a whole separate essay... maybe next week) and quickly establishes its central love triangle.

Mary is betrothed to Francis, who obviously likes her back, but is hesitant to marry her or allow himself to fall in love. Why? Officially, because he fears that allying with Scotland is not in France's best interest. Unofficially, he's banging a chambermaid and thinks Mary has too many opinions (no joke). Mary is smitten with Francis and all on board the marriage express, but since he's an outright douche to her, she allows her eye to wander to his less hot, but less dick-ish bastard brother, Sebastian. Sebastian is totally into Mary too — you can tell because he ventured into the woods to find her dog when it ran away (and no, unfortunately, that's not a euphemism).

But wait! There's more! More drama, you say? How could there be more? Francis' mother, Catherine, lives her life by the word of her psychic, famed prophet Nostradamus. Old Nos (we really need to establish a nickname for this guy) has a vision that Mary will cause Francis' death and Catherine is determined to stop the wedding. Instead of discussing her concerns with her husband or son, she jumps straight to an evil scheme in which she blackmails the suitor of one of Mary's ladies in waiting (a poor chap named Colin) to date rape Mary, rendering her unfit for royal marriage. Luckily, Mary is warned by a ghost behind a tapestry not to drink the roofied wine Colin offers her and the rape does not go as planned — mostly because she's conscious and fights back.

I'm not kidding at all. All of this actually happens in the pilot. It's a shame because Mary, Queen of Scots was actually, by all accounts, a pretty smart, badass lady and her life was certainly dramatic enough to sustain a series. An accurate portrayal of her life and rule would be engaging, educational, dripping with drama and shockingly, probably more feminist than the modern-infused version of events The CW is selling.

At least those headbands are awesome?

Did you watch Reign? Is it a guilty pleasure or just guilty of crimes against TV?

More like this
Penn Badgley & Leighton Meester Met On A Horror Movie Set Before 'Gossip Girl'
By Jake Viswanath
Sandra Bullock, Girlboss Extraordinaire
By Matt Harkins & Viviana Olen
Kaley Cuoco & Tom Pelphrey Just Made Their First Public Appearance As A Couple
By Hugh McIntyre
The 'This Is Us' Finale Featured An Adorable Season 1 Jack & Rebecca Easter Egg
By Grace Wehniainen
Get Even More From Bustle — Sign Up For The Newsletter