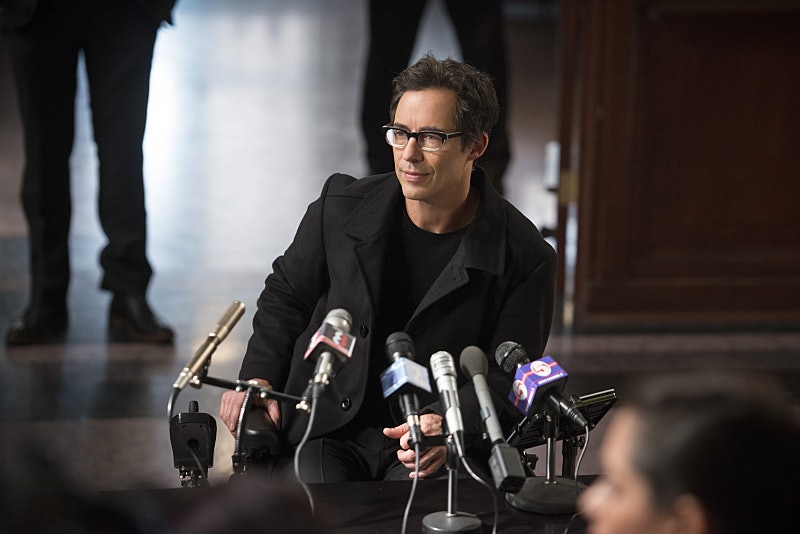 One of the best things about The CW's hit series The Flash is that every week you can count on some major teases about upcoming episodes, deeper character backgrounds, additional season-long plot details, and most importantly, more information about the fascinating Harrison Wells. At this point, we all now know that on The Flash , Harrison Wells is actually Eobard Thawne, aka Reverse-Flash, who sometimes goes by Professor Zoom in DC Comics. Harrison revealed this piece of information to Cisco after everyone's favorite S.T.A.R. Labs nerd continued to investigate what actually happened the night they first faced Reverse-Flash. Harrison also killed Cisco after telling him the truth, but it seems Barry has reversed that storyline by running so fast, he travelled back in time. This reveal from Harrison is definitely a huge one for fans, but what about his other major reveals?

Ever since the pilot episode, we've been treated to brief scenes at the very end of each episode that involve some new secret Harrison is keeping, from stealing a metahuman's power to providing our first glimpse of Gorilla Grodd. In fact, while The Flash as whole is a blast to watch, I always wait rather impatiently for the end to see what else will be revealed. So in honor of Harrison's secrets unlocked, I have taken it upon myself to do the difficult duty of ranking Harrison's reveals by shock value and amount of information actually revealed. Because for everything we've learned, there is so much more we need to know about this villainous man.

9. Harrison Steals DNA From Blackout To Learn More About His Power

A lot happens in the "Power Outage" episode of The Flash, which features the villain Blackout. He is able to take Barry's powers away by draining them out of his body to use as his own fuel, and in the last scene, we see Harrison attempt to take some of Blackout's DNA to test and see how this could be possible. Obviously at the time of the episode, we didn't understand why, but now it's so much more clear. That makes this reveal intriguing, but not the most memorable.

8. Harrison Uses The Tachyonic Device To Recharge His Suit

We again get a glimpse of Harrison's plan, but not enough to really understand what he is attempting to do. We won't get all of that information until he spills the beans to Cisco.

This scene baffles me. Now I'm assuming the real reason Harrison killed Stagg was to make sure he wouldn't interfere with the development of Barry's powers, so that Harrison could use The Flash to get back to his own timeline and eventually destroy him. But at the time of the reveal, none of that was clear, so I actually believed Harrison could be some kind of time-traveling fairy godfather for Barry.

6. Harrison Talks To Grodd In A Flashback

The first glimpse of Grodd. An incredible tease, but one made even better when Grodd and General Eiling meet again later in the season.

We finally get proof that Harrison planned the particle accelerator explosion so that Barry could get his powers, but we don't totally know why. Again, a reveal that was strengthened by what came next.

So. Good. I can't wait to see the repercussions of this, especially considering that Iris' boss, Mason Bridge, is investigating Harrison heavily.

3. Harrison Is Shown To Have The Reverse-Flash Suit

The first big piece of proof that Harrison is the Reverse-Flash is revealed, and it is so worth the wait. Why didn't this land in the top spot? The next two reveals pulled through thanks to sheer shock value.

2. Harrison's Future Room & Newspaper Are Revealed — Oh, And He Can Walk

This was the very first reveal of the series and boy, was it a doozy. Not only do we see that Harrison can walk, we also get the reveal of the newspaper from 2024 that proves Harrison has ties to the future. If we only knew what Harrison revealed recently back then, our heads might explode from too much awesome information, too fast.

Thank goodness this reveal and devastating death most likely won't stick, due to the brilliance of Barry harnessing his powers and traveling back in time. Though I do hope that Cisco will find out the truth again soon and hopefully share it with some people, next time he shouldn't become collateral damage. Because if Cisco died again and it actually stuck, I don't know if my heart could handle the pain. Still, as hard as it was to watch, you have to admit, it was an epic reveal.