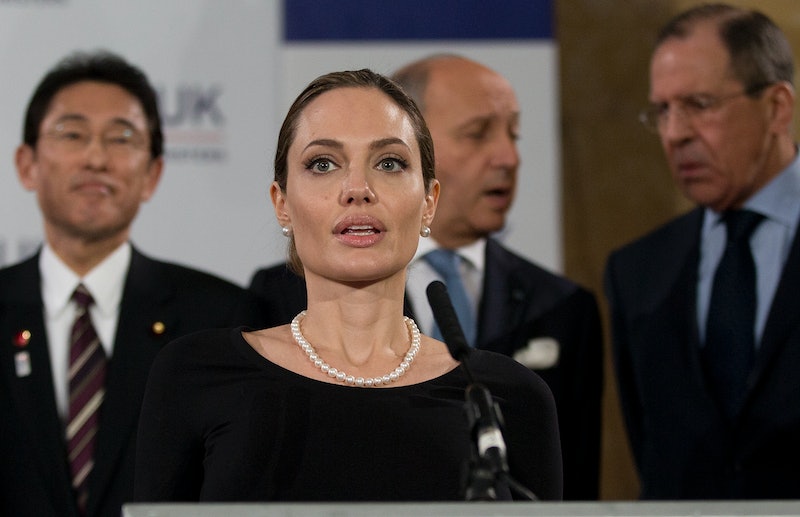 Angelina Jolie is a celebrity, but first and foremost, she is a human. So, you don't have to be a fan of hers, but you should try and find the humanity in her situation. Angelina Jolie's New York Times op-ed, "Diary of a Surgery" does not mean less because she is a famous and, for fear of looking shallow, we're not supposed to "care" about celebrity affairs. Her story itself isn't more important than an average person's, but what her op-ed does do, because she's a celebrity, is reach a wider audience. And, if you've actually read her concise yet poignant piece, you'd know that was her intention.

We so readily read a headline without bothering to take a look at the content of an article, but by doing that, it's easy to jump to rash, erroneous conclusions. And the Internet and rapid news vehicles like Twitter make it all too easy. It's too common an occurrence that we resort to being hateful or "funny" or negative on social media. It shouldn't be such a rare phenomenon to try and grasp a situation that someone else is going through, one that you may be lucky enough to not relate to, and spread compassion and understanding instead.

Because I have seen so many people make uninformed judgments, here is an excerpt of Jolie explaining her medical history,

Two years ago I wrote about my choice to have a preventive double mastectomy. A simple blood test had revealed that I carried a mutation in the BRCA1 gene. It gave me an estimated 87 percent risk of breast cancer and a 50 percent risk of ovarian cancer. I lost my mother, grandmother and aunt to cancer.

She then went on to say, after sharing that she had surgery to remove her fallopian tubes and ovaries,

I did not do this solely because I carry the BRCA1 gene mutation, and I want other women to hear this. A positive BRCA test does not mean a leap to surgery. I have spoken to many doctors, surgeons and naturopaths. There are other options. Some women take birth control pills or rely on alternative medicines combined with frequent checks. There is more than one way to deal with any health issue. The most important thing is to learn about the options and choose what is right for you personally.

I urge you to read her piece in full, because it is so clear that she has no other agenda other than to help people. There is nothing in the article that screams, "Follow me!" which is why the following tweets are insensitive, incredibly disconcerting, and in poor taste.

Those Who Are Skirting The Issue

By generalizing the removal surgeries Jolie has had done, they are effectively trivializing the very real risk she faced. And to disprove their all or nothing assumptions, Jolie explains how she decided not to remove her uterus because that was not affected by cancer according to her family history. She removed the very specific problem areas because, to herself and her doctors, the risk was too great to keep them.

Those Who "Don't Care"

Actually, we do. Or at least, I do. Because of her op-ed, I know that other women facing a similar plight may now have the knowledge or the push to do something for their health that they might not have before.

Those Trying To Make It Funny

I won't even begin to get into the tasteless Bruce Jenner comments, because this isn't about that. It's about Jolie and the health issue she and various other women face being treated as a joke. I like to think that I have a decently open-minded sense of humor, but these mean spirited "jokes" aren't the least bit funny. They're ignorant and hurtful and perpetuate the notion that being a woman and having the issues that come with that are embarrassing or shameful.

Those That Insinuate That She's Insane

No, it's actually not crazy at all to get multiple opinions on a health condition from various, learned doctors and then making a well thought out, educated decision based on their advice and your own personal intuition.

From here on out, let's make a point of reading, thinking, and analyzing before we tweet. It'll do us all some good.