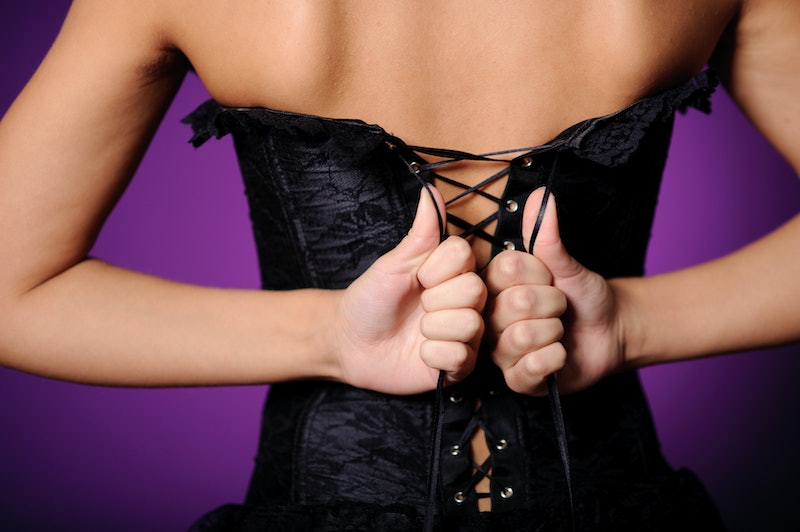 This content includes discussion of eating disorders and may be triggering to some readers. Because Americans love dumb articles about “new” fads disguised as weight loss advice, some women are using something called The Corset Diet to permanently alter the shape of their bodies...again.

Corsets have been sucking in women’s fat for approximately one zillion years, and every few years some reporter learns of modern-day women who squeeze into these devices in order to create smaller waists without resorting to kale chips and cardio. This time, though, The Corset Diet has a website.

Ditching dieting and exercise, one company in the U.K. is providing a seemingly attractive alternative. For just £49.99, you can have your very own “Victorian corset replica” that will “please and delight.” This corset isn’t your average Victoria’s Secret sexytimes corset — it’s specially designed to encourage weight loss. According to the site, their program’s most successful corset-wearer went from a size 32 corset to a 30, losing 12 pounds in the process.

The Corset Diet positions itself as a safer alternative to gastric bypass surgery, which may not be entirely untrue. Bariatric surgeries, which restrict the size of the patient’s stomach, often mean living with life-altering complications. While it’s likely that most people who attempt the corset diet won’t seriously harm their bodies, long-term or improper corset wear can bruise the organs and lead to other health problems.

Some women may achieve significant waist-slimming results by wearing a corset. According to bariatric physician Jyotindra Shah, The Corset Diet is “no diet at all.” In Shah’s view, the corset is a “a bone-compressing article of clothing that whittles waists by reshaping the ribcage.” Search Google for “waist training” for thousands of images of women who have fundamentally reshaped their bodies with stiff corsets.

Some of these women likely have serious body image issues, but many may just want to shape their bodies. As Lesley Kinzel at xoJane points out, wearing a corset really isn’t much different than the other things women do to change and shape their bodies, like count calories and wear Spanx.

In a society where women ingest cotton balls and tapeworms to stay skinny, diet “tricks” that offer a quick-fix skinny body are very tempting. As someone who has done the 48 Hour Hollywood Miracle Diet (which I was stupidly shocked to learn still exists), I’m really in no place to judge women who want to slim down by using corsets.

The pressure to be and stay thin is very real, even for women who don’t work in image-conscious industries. In this instance, the corset is diet culture’s tool, just like pills, potions, and exercise products. That doesn’t mean, though, that you should head over to The Corset Diet’s web store to pick up your very own waist-whittler.

Aside from the potential health concerns, it probably won’t help you lose weight. Like most other diets, the results from “waist training” will fade once you stop wearing the corset. Despite what the diet industrial complex has told you about any kind of diet, including those we call “lifestyle changes,” most fail in the long term.

For people who do struggle with body image and eating disorders, these “extreme dieting” puff pieces can be immeasurably triggering. Instead of discussing the overall cultural obsession with thinness and unattainable beauty ideals, most media coverage of The Corset Diet has focused on featuring pictures of “extreme” results — women with extremely tiny waists.

This discussion is not productive. Until there is a real discussion about the impact of the massive diet industry on body image and overall health, there will be a “new shocking diet trend” every week. These “trends” are likely not new, and for most people who have experience in the dieting world, not shocking.

Diet alarmism is almost always misdirected, and outrage at The Corset Diet is no different. Call me when people are shocked that women eat 600 calories a day to lose weight, or exercise 5 hours a day to achieve that “perfect beach bod.”