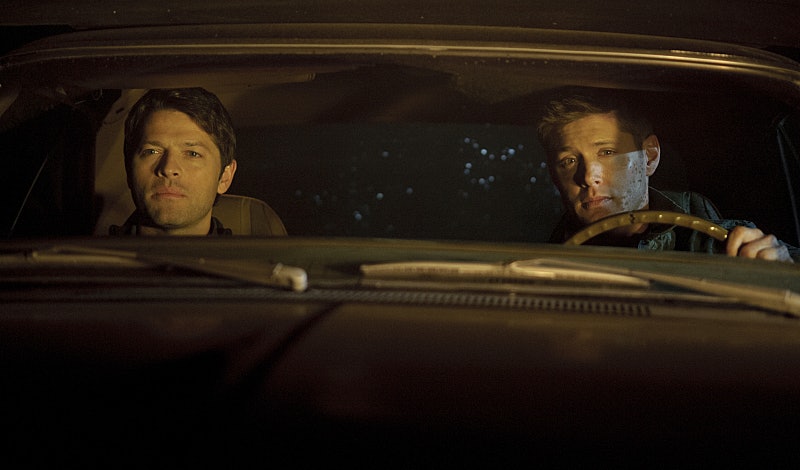 If Supernatural fans can count on anything, it's the show's bromances. Of course, Sam and Dean Winchester are actually brothers, and Jensen Ackles and Jared Padalecki are basically BFFs in real life, so maybe that term is a little bit too literal for them. But that's fine, because the real bromance of Supernatural is Dean and Castiel — Destiel, if you will. (YOU WILL.) Dean and Castiel have the cutest, most 'shippy friendship out of all of the characters on the show, although some (aka me) might argue that Dean and everyone's favorite English demon, Crowley, might have given Destiel a run for their money at the beginning of Season 10. Still, no one can break the bond that these two unlikely bros have, and what better way to celebrate six seasons of friendship than to remember some of Destiel's best moments?

While some of my favorite moments take place in quiet scenes (or even in the gag reels — check those out of you've never seen them before), there are so many moments that show just how deep Dean and Castiel's friendship runs. From the all-business angel assistance to every "I need you" we've been granted, here are the nine best Destiel scenes from Supernatural.

He first appears at the end of Season 3, but it's not until the beginning of Season 4 that we learn Castiel was the one who brought Dean back from Hell and resurrected him. Basically, this was the moment when we all realized the two were destined for a beautiful friendship.

When Dean's Habits Finally Started To Rub Off On Cas

Castiel said this to the angel Michael when he was fighting with Sam and Dean near the pit of Hell in Season 5. It was a glorious moment to behold and proved that Dean really was having some kind of awesome influence on Cas.

When Cas Reminded Dean Just How Loyal He Was

This was pretty huge for Castiel to admit, because when he first started working with the Winchesters in Season 3, he was all business. This was the first time he openly admitted to himself and Dean that he was personally invested in their lives, and it was an equally huge moment in the context of the episode — Dean was having trouble trusting Cas at the time, but Cas proved that he would always be there for him. #RelationshipGoals

When Dean Refused To Abandon Cas In Purgatory

When Dean and Castiel were stuck in purgatory in Season 7 after defeating the Leviathans, Castiel was actually a complication. Castiel couldn't help Dean escape because so many of the souls trapped in there were after him. Even though Dean knew that, he couldn't stand the thought of leaving him behind.

In Season 8, Castiel was brain-washed by one of the more nefarious angels, Naomi, to kill Dean. After succeeded in killing all of the "test" Deans she had for him, when it came time for the real thing, Dean was able to get through to Cas by saying three little words: "I need you."

It was Season 5, and Dean had just come back from a future where the world was basically facing a disease-ridden apocalypse (long story, just go with it). After returning to the present, he immediately finds Castiel waiting for him like they had planned. It was perfect.

The Entirety Of "The French Mistake"

OK, so technically in this episode Castiel wasn't "Castiel"— he was Misha Collins, the actor who portrays Castiel. The whole premise of this episode is that Dean and Sam got sent to an alternate universe where their lives were a TV show. Basically, it was Supernatural's biggest meta moment. I just loved how Misha was trying so hard to be friends with Jensen and Jared. It was precious.

When Castiel Tried To Be Dean's Partner

During Season 5, Sam told Dean that he wanted to give up hunting. So, naturally, Cas tried to take his place, and watching him attempt to lie and pretend to be an FBI agent was a thing of beauty.

Last But Certainly Not Least: Every. Single. Bro Hug.