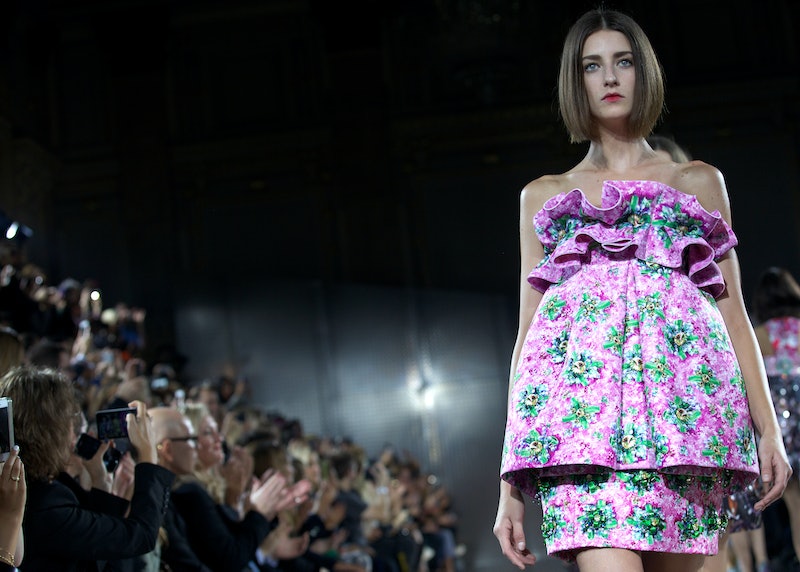 Mary Katrantzou is just about the coolest designer hitting the larger scene today. Playing with textiles, bold colors, and architectural silhouettes, she's the epitome of modern-girl-cool. And now, Mary Katrantzou has won the BFC/Vogue Prize in London and we couldn't be more thrilled for her.

The prize, formally called the BFC/Vogue Designer Fashion Fund, awards the winner with "high-level mentoring for a year, a grant of $298,500, to pay for the infrastructure that allows them to take the next step in business," according to WWD. The fund started in 2008, and designers must present a collection to the judges, along with a five-year plan for their business. From there, the panel makes a decision.

New this year is an online video series called "Designer Fashion Fund," which will air on Youtube and Vogue.co.uk. These videos will go through the application process and show clips of interviews with the judges. Winners of the prize in the past include Nicholas Kirkwood, Christopher Kane, and Erdem, according to WWD. The judging panel? It was stacked with industry moguls like Naomi Campbell, and was sponsored by Burberry, Paul Smith, Topshop, British Vogue, Harrods, and Debenhams.

If you haven't heard of Katrantzou, pay attention. Here are 6 things you should know about this seriously rad designer.

She went to the Rhode Island School of Design and eventually transferred to the Central Saint Martins to get a degree in Textile Design. Eventually, she got a distinction in MA fashion. But originally, she was born in Athens, Greece, which explains the sandy and ocean colors in previous collections.

She collaborated with Adidas for the trippiest sportswear collection. We're talking blown up prints of shoelaces, zip-ups and dresses made of neoprene and sneakers with spikes. Other past collaborations include Topshop in in 2012, Atelier Swarovski, and a capsule collection for Longchamp. Talk about a powerhouse.

3. An Eye For Design And Style Runs In The Family

Her mother is an interior designer, and her father worked in textiles. It's no wonder her designs are on point every. single. time.

4. She's All About Patterns and Silhouettes

Previous themes in her collections include perfume bottles, artisanal blown glass, vintage postage stamps, and landscapes. Katrantzou "became interested in the way that printed textiles can change the shape of a woman's body," according to her website. Beautiful patterns and interesting silhouettes? Count us in.

Mary creates her prints through digital technology. She says on her website, "Digital print allows me to experiment with print in a way that fine art and other methods could not. It opens up a huge spectrum for possibility; I can create possibility out of impossibility, surrealism out of realism and both vice versa.”

6. This Isn't Her First Major Award

She's won the Swiss Textiles Award in 2010, along with the British Fashion Award for Emerging Talent in Womenswear. And, in 2012, she won the Young Designer of the Year title at the Elle Style Awards.

You can shop her collections at https://www.marykatrantzou.com/shop.