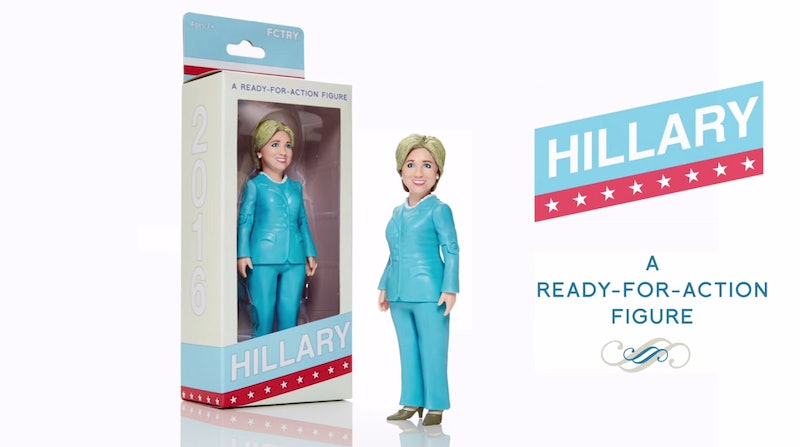 Forget Barbie, an action figure of your favorite female powerhouse may be coming to a store near you. A Brooklyn couple created a Hillary Clinton action figure and just raised enough money to mass produce the collectible, which they call a "Ready-For-Action" figure. The duo reached their Kickstarter goal of $15,000, so prepare room on your shelf for the best tchotchke you'll ever acquire.

The action figure, donning a turquoise pantsuit and pearl necklace, was created by Jason Feinberg and Alyssa Zeller, who started the design company FCTRY, and it was designed by Mike Leavitt, a renowned action figure sculptor. Feinberg and Zeller, husband and wife as well as business partners, were behind the Mustachifier (a pacifier with a mustache attached) and the Obama action figure, so this isn't their first quirky endeavor.

Everyone who donates to the Kickstarter gets a "Run, Hillary. Run!" postcard sent to the potential 2016 presidential candidate. A promotional video on the Kickstarter page says: "She can solve any international crisis with a single joke. Strong enough to wrestle Russian bears, yet cool enough to diffuse any Korean missile. Smart, bold, and stylish, the world has never seen a woman quite like this." The campaign has raised $15,569 from 477 backers already, but if the campaign reaches $60,000, FCTRY will also make a pink version of the plastic Hillary. We really need this action figure in every color.

In preparation for the glorious day I get to own one of these bad boys — er, girls — here's what I plan to do with my Hillary Clinton action figure.

Tell Her About My Problems

Sometimes you just need to talk about your problems out loud, and who better to listen than Hillary Clinton? She'll listen without interrupting, and her supportive silence will lead me to my own conclusions about what to do. If only the action figure were a bobble head and she could agree with everything I say.

Have Her Guard My Valuables

Placing the Hillary Clinton action figure next to the box I not-so-secretly hide my one valuable necklace and passport in will undoubtedly ward off any potential thieves. No one's going to commit a crime in plain sight of the former secretary of state.

Hill and I would make a great karaoke duo. The action figure and I will sing along to tunes about female-empowerment until our hearts are content. (I'll be using my best Hillary Clinton impersonation for her parts, obviously.)

Depending on how flexible the plastic Hillary is, I'll definitely make her do this on a daily basis.

More like this
23 Times Meghan Markle Dressed Just Like Princess Diana
By Bustle UK
34 Quotes That'll Inspire You On Juneteenth & Beyond
By Syeda Khaula Saad and Siena Gagliano
How To Fight For Reproductive Rights, Based On How Much Time You Have
By Courtney Young
How 5 People Upended Their Lives To Fight For Abortion Rights
By Hannah Smothers
Get Even More From Bustle — Sign Up For The Newsletter